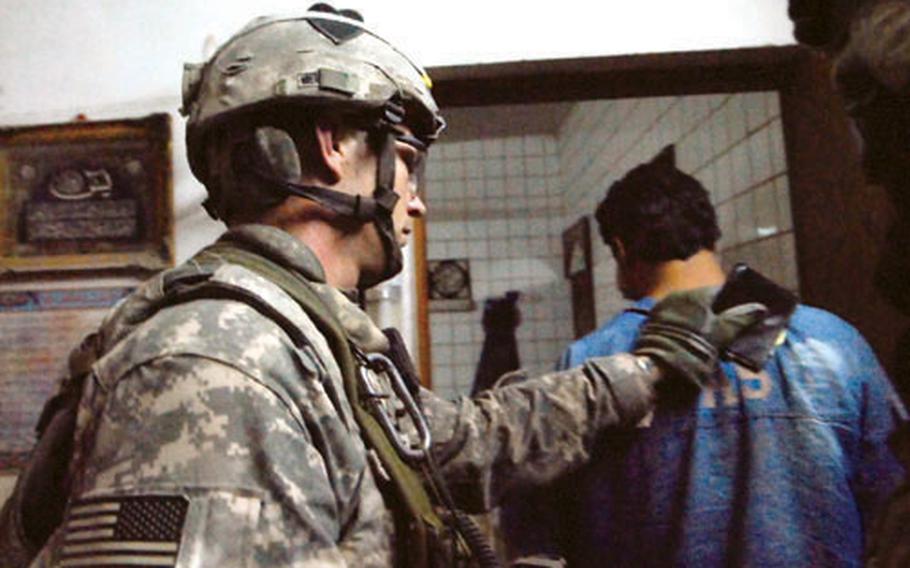 A soldier with Troop A, 1st Squadron, 75th Cavalry Regiment leads away an alleged rising leader in a group affiliated with al-Qaida in Iraq following a chase Tuesday in Baghdad’s Ghazaliya neighborhood. (James Warden / S&S)

He&#8217;s thought to be the rising leader of an insurgent group affiliated with al-Qaida in Iraq that targets Shiites returning to Baghdad&#8217;s Ghazaliya neighborhood. He&#8217;s suspected of emplacing roadside bombs and may have participated in drive-by shootings and sniper attacks.

Unfortunately for this college-age suspected insurgent, he also very badly needed to pass his final exams.

Soldiers with Troop A, 1st Squadron, 75th Cavalry Regiment captured what they called one of the most wanted insurgent leaders in the area after a spirited early-morning rooftop chase that started in the home where he was studying for an upcoming final.

The man, whose name is being withheld while soldiers complete their interrogation, was allegedly connected to a youth insurgent group, said Capt. Thomas Melton, the Troop A commander. The soldiers had detained leaders of the group&#8217;s sub-cells, and the man they arrested was thought to be either in charge or soon to be in charge.

Details about the exact number of attacks he&#8217;s been involved in are hard to confirm. There have been eight roadside bomb attacks in his neighborhood over the past month, although he&#8217;s probably not responsible for them all. He also has a precision shooting background and may be responsible for recent killings of Iraqi security forces.

The suspect had eluded the Americans for about a month, with troops occasionally just missing him. The platoon that finally detained him Tuesday had tried to capture him about five times.

"This guy&#8217;s caused so many heartaches, so many long nights," said Sgt. Joseph Ramsey.

Troop A learned the man was back in the area late Monday, and sent a platoon already out on patrol to try to catch him once again. This time, they came upon him as he was studying for a final exam with a friend.

Students in Iraq have just two chances to pass exams that allow them to progress to the next level. They are barred from ever getting their diploma if they don&#8217;t pass the second test. The suspect, who is 21 or 22 years old, had already failed his exams once. His detention kept him from taking the test the final time and will probably prevent him from ever getting his college degree.

Melton estimates that about 80 percent of the alleged insurgents his troop detains are between 19 and 25.

The man fled through narrow alleyways when he saw American soldiers arrive. Most of the platoon sprinted down the darkened roads outside to catch him, clearing a few houses and questioning the occupants as they went.

A couple of soldiers chased the man from the rooftops, jumping over the occasional gap between homes in full combat load.

"(It was) kind of worrying with all this gear &#8212; rough stuff, but it was necessary," said Spc. Gary Tate, one of those soldiers.

Tate spotted the suspect trying to leave through a front gate three homes down from where his wife and child live. The man returned inside and tried to blend in with the family when Tate shouted to his fellow soldiers.

Soldiers learned they had their suspect when the head of that home pointed to a man wearing blue flip-flops and identified him as the wanted man.

The man initially denied any wrongdoing and said he&#8217;d only been running because they were chasing him.

Melton said the man&#8217;s capture further disrupts the insurgent group and will make it safer for Shiites returning to the homes they&#8217;d fled earlier in the war. About 10 families a day are returning to the area now that the security situation has improved, officials have said.