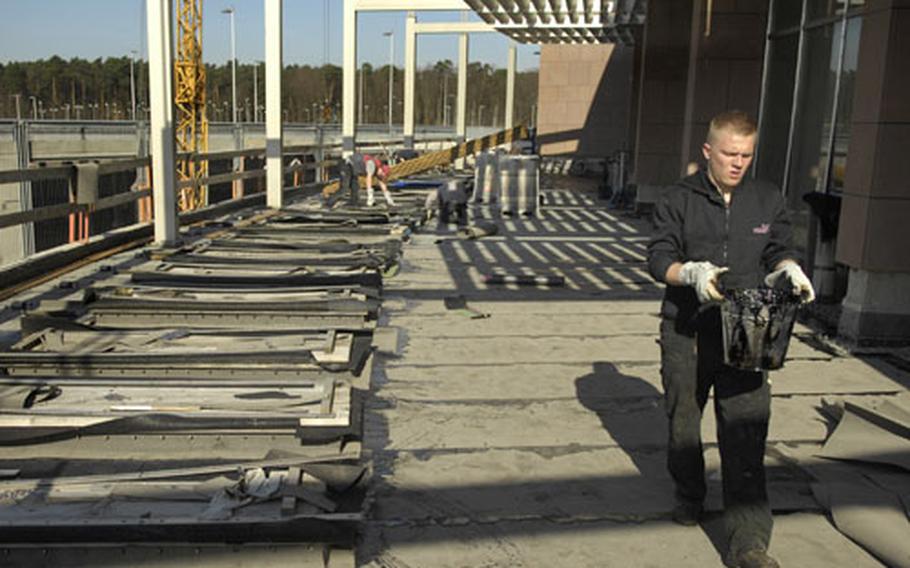 A construction worker from the contractor Lanzenstiel transports tar used to seal the membrane on a portion of the Kaiserslautern Military Community Center roof Tuesday at Ramstein Air Base, Germany. Phase 1 of a four-step plan to fix the poorly constructed roof is under way. (Ben Bloker / S&S)

A construction worker from the contractor Lanzenstiel transports tar used to seal the membrane on a portion of the Kaiserslautern Military Community Center roof Tuesday at Ramstein Air Base, Germany. Phase 1 of a four-step plan to fix the poorly constructed roof is under way. (Ben Bloker / S&S) 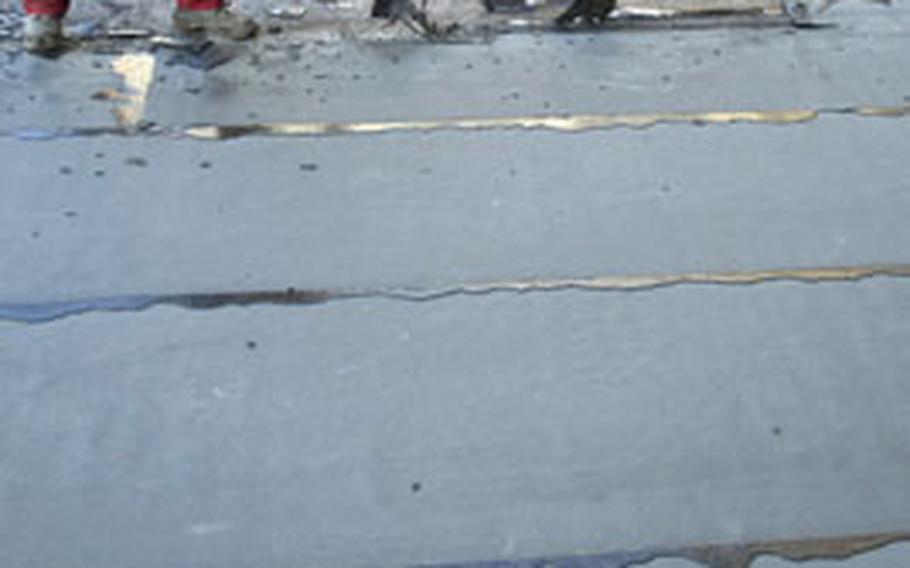 A construction worker tears up the faulty membrane on a portion of the Kaiserslautern Military Community Center roof. (Ben Bloker / S&S) 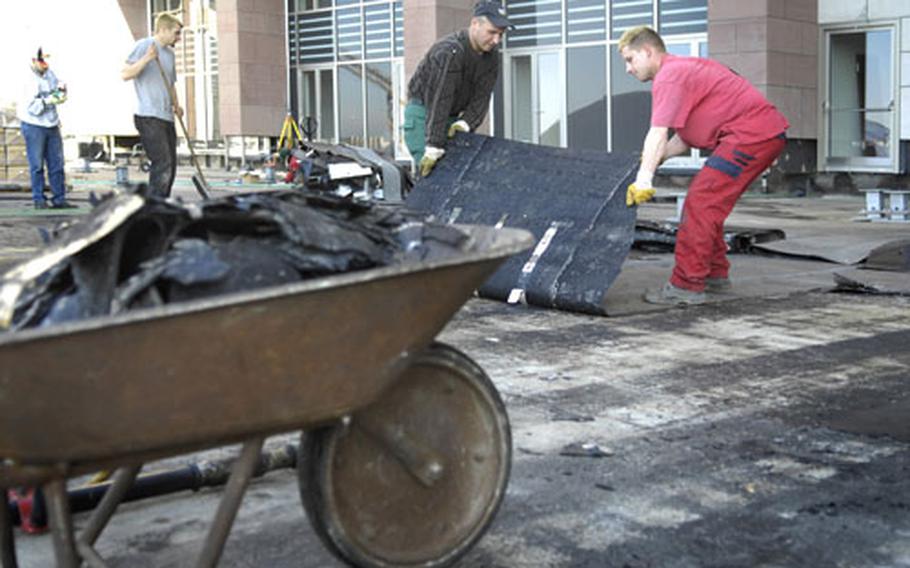 RAMSTEIN AIR BASE, Germany &#8212; Construction crews arrived in full force on Tuesday, ripping up and repairing a key piece of the Kaiserslautern Military Community Center: the mall-hotel project&#8217;s leaky roof.

Using everything from blow torches to shovels, workers began digging into a job that Air Force officials admit will be tough, labor-intensive and critically important to finishing the troubled project by the end of the year.

The 844,000-square-foot building is already more than a year behind schedule, largely because of the faulty roof.

Workers pried, chipped and shoveled old bits of the roof with power tools in sections. When they finished removing the old roof, they coated the top with an adhesive to seal the roof and prevent leaks.

The previous contractor, which is now bankrupt, did such a shoddy job that nearly every section of the roof will need to be fixed. About half of the roof will have to be torn up and redone.

Military officials once touted the &#8220;green roof&#8221; as eco-friendly and one-of-a-kind. Contractors had spread soil and crushed rock atop the roof and had planned to grow grass and plants. The hope was that it would help reduce energy costs.

At one point, pumps had to be used to suck out the water caused by the leaky roof. Crews have patched up much of the seeping water spots, but Reynolds acknowledged that there continues to be some smaller problems. Workers discovered more leaks as recently as two weeks ago, he said.

The repair project is expected to cost about $10 million, which is being financed by a loan provided by the German government. The U.S. and German government still have to work out the details of who would pay for the fix.

The repair will not be an easy job.

Workers will use pumps to move the gravel over the worst sections. The Air Force has hired an expert from Karlsruhe to help ensure the contractors do the work correctly this time.

As workers tore up the old roof, Air Force technical expert Achim Romanowski pointed out some of the most glaring mistakes made by the previous contractor. He noted how easily current workers removed some sections of the roof by hand.

The work will be done in four phases.

Contractors began working on the first phase, which includes the terrace and roof toward the front and back of the lower levels of the hotel, on Feb. 29. The second phase will involve repairing the roof to the hotel. The third phase, one of the biggest parts of the roof fix, will include completely repairing one-third of the facility&#8217;s roof. The final phase will involve fixing the rest.

German state construction agency Landesbetrieb Liegenschafts und Baubetreuung, or LBB, is coordinating the $161 million mall-hotel project with additional oversight provided by U.S. Air Forces in Europe headquarters. Once finished, the mall and hotel will have 40 stores, a large food court, a new Outdoor Recreation Center and 350 hotel rooms. Although officials expect construction to be completed by the end of the year, the Army and Air Force Exchange Service shopping center and hotel are not expected to open until early 2009.