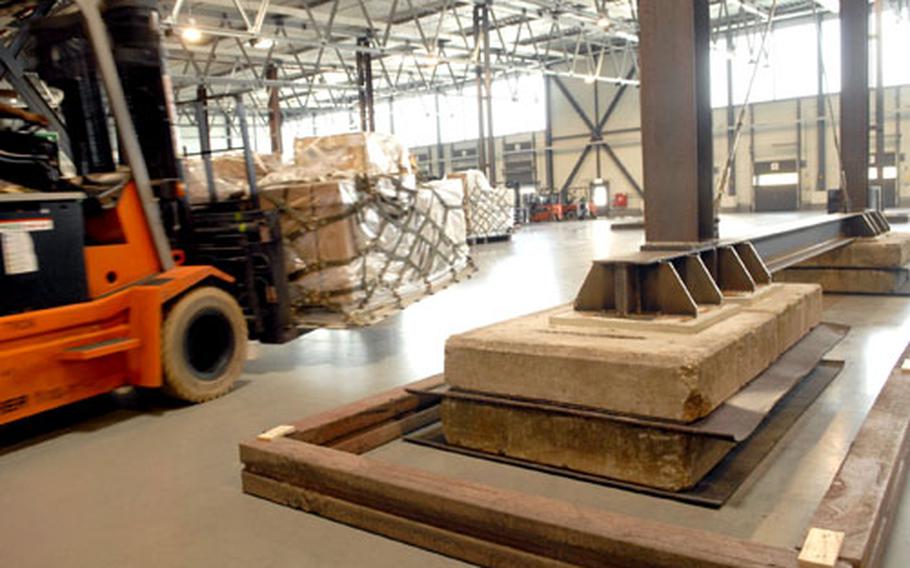 Gerald January, a cargo processor with the 723rd Air Mobility Squadron, moves a pallet headed for Balad Air Base, Iraq around one of many support beam footings Thursday at Ramstein’s air freight terminal. (Ben Bloker / S&S)

Gerald January, a cargo processor with the 723rd Air Mobility Squadron, moves a pallet headed for Balad Air Base, Iraq around one of many support beam footings Thursday at Ramstein’s air freight terminal. (Ben Bloker / S&S) 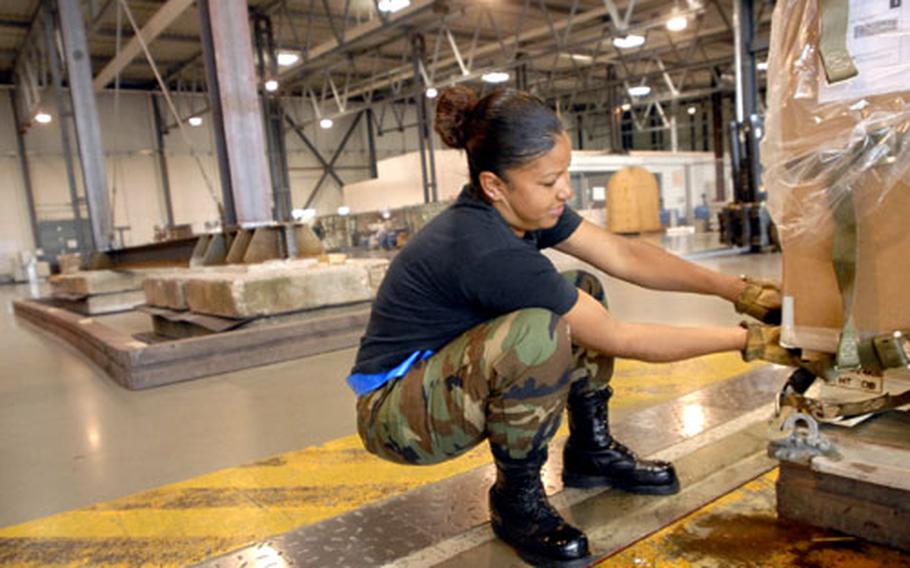 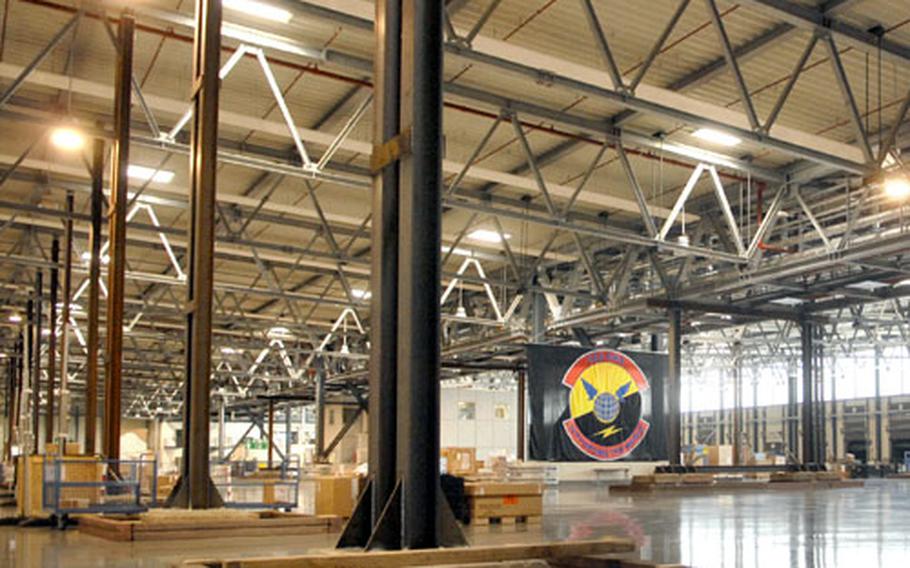 Due to structural design flaws in the roof, temporary support beams have been installed throughout Ramstein’s 723rd Air Mobility Squadron air freight terminal to prevent the roof from collapsing. (Ben Bloker / S&S)

RAMSTEIN AIR BASE, Germany &#8212; German engineers looking into Ramstein&#8217;s air freight terminal found the roof above a portion of the facility to be so unsafe it could collapse without reinforcement.

The terminal is only three years old, but the roof is in such bad shape the Air Force does not know what needs to be done to fix the problem or how much it would cost.

The Air Force has relocated some offices, and contractors have installed more than three dozen 35-foot steel beams to support the faulty roof. A large white tent stands next to the facility as a backup work area in case the building is deemed too dangerous for airmen to work inside.

The trouble with the terminal adds to the growing list of construction problems at the Defense Department&#8217;s biggest European base. The building is only a short walk from the unfinished and delayed mall and hotel complex, which is so overwhelmed by problems it has no official completion date and no cost estimate.

Those construction problems have become a sensitive topic among Air Force officials at the base.

Without explanation, U.S. Air Forces in Europe headquarters rejected requests to interview those who work in the building or installation management officials familiar with the issue. Public affairs officials allowed a photographer and reporter to tour the building but would only consider questions e-mailed to the headquarters. An officer, who conducted the tour, was not allowed to be quoted for this story.

In its e-mail response, the Air Force said structural problems include a &#8220;faulty galvanized metal manufacturing process,&#8221; improper construction, and poor design. Those problems affect a 100,000-square-foot warehouse, called the &#8220;infill structure,&#8221; where airmen process and transport pallets of cargo.

Some questions remained unanswered, including the identity of the company responsible for the construction faults and whether any other buildings on base underwent a similar review and have similar problems. USAFE officials also did not say what prompted the study.

The Air Force learned about the defects to the building last September, when German state engineers conducted the review, USAFE said.

A large white tent bigger than a football field was erected just outside the facility due to fears that heavy snow could cave in the roof. The 723rd Air Mobility Squadron, which processes cargo at the base and works at the terminal, briefly moved into the tent because of safety concerns, according to military sources who did not want their names used.

Landesbetrieb Liegenschafts-und Baubetreuung told the Air Force about structural problems to the 100,000-square-foot warehouse connected to the terminal in June. Contractors recently completed the construction of the steel beams.

The building is one of the largest on base and is a critical component in the base&#8217;s role as the U.S. military&#8217;s major airlift hub. The 723rd processes more cargo than any other Air Force unit in Europe, helping transport bullets and supplies to troops in Iraq and elsewhere.