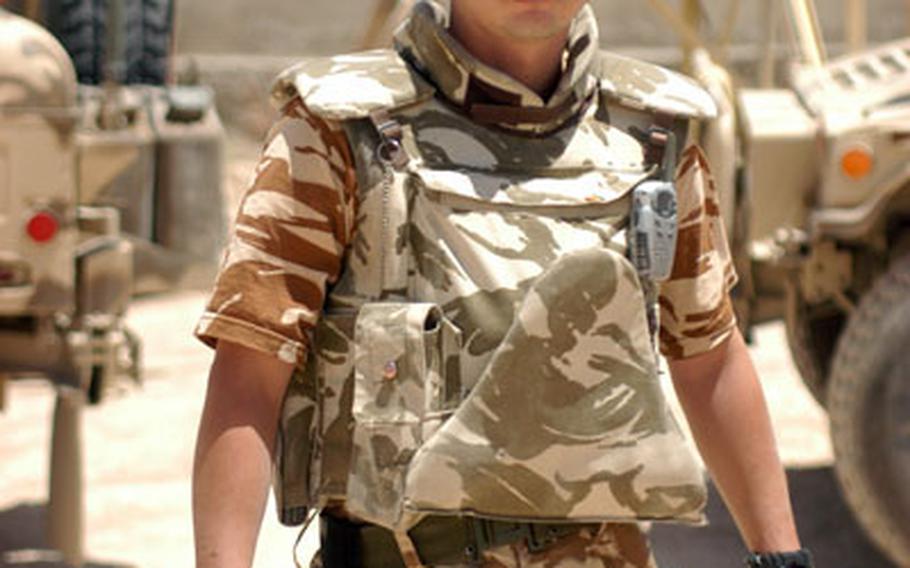 "We don&#39;t stop if we don&#39;t have a reason," says Romanian army Staff Sgt. Adrian Puiu, the vehicle commander in one of the Humvees that recently visited Camp Dracula, the unofficial name of a base camp in Shah Joy, Afghanistan. (Kevin Dougherty / S&S)

But then what would you expect from a bat-talion from Transylvania?

Officially, the U.S. military refers to the base along Afghan Highway 1 as Camp Varner, named in honor of a fallen American soldier. The Romanians respect that, using Varner in all things official.

However, within the wire, the 812th Infantry Battalion, the &#8220;Carpathians&#8217; Hawks,&#8221; appreciate the biting humor Camp Dracula implies. There&#8217;s logic behind it as well. The unit is based in the city of Bistrita, close to where Dracula&#8217;s stone castle looms over the landscape.

There is more to this battalion than tangential folklore.

The unit from Transylvania is on its second six-month tour to this war-weary land, having deployed to Kandahar in 2002-03. None of its soldiers have died during the deployment.

Most of the battalion, which is nearly 500 strong, works out of Camp Lagman, situated 80 miles north of Kandahar. It&#8217;s the headquarters for Task Force Zabul, commanded by Romanian army Maj. Ovidiu Uif&#8217;leanu. About 300 of his soldiers are assigned to Lagman, along with scores of Americans.

With more than 50 troops, Camp Dracula is the second-largest Romanian base, in terms of military personnel. The rest of the battalion is spread out between six other locations.

Across Afghanistan there are a few hundred additional Romanians. Some are helping train the Afghan National Army. Others serve in staff positions for the International Security Assistance Force or on Provisional Reconstruction Teams.

But the mission to help secure the 100-mile stretch of Highway 1 running through Zabul province is its most critical mission, Uif&#8217;leanu said, since the paved road serves as the primary artery between Kandahar and Kabul.

On a recent patrol and supply run from Lagman to Varner/Dracula, the 812th rolled out in six U.S.-made Humvees.

Romanians soldiers tend to operate more cautiously than most American units. The Romanians, for example, wear seatbelts; the Americans generally don&#8217;t. The former don&#8217;t banter much; the latter do.

Twenty minutes up the road, the Humvees come to a stop. After a brief pause, the Romanians roll forward, but come to a halt, again. The soldiers in the reconnaissance vehicle have heard from southbound motorists that there are 40 Taliban fighters in the vicinity.

What the Taliban is said to fear most about the Romanians are their armored personnel carriers, which fire 14.5 mm rounds capable of piercing mud-brick walls.

Nonetheless, the headquarters back at Lagman sends a quick reaction force from Varner to the scene.

Eventually, the two parties link up, but the quick reaction force saw no overt sign of Taliban fighters on the way down. Rumors circulate that five people, possibly Western aid workers, had their car stolen &#8212; with them in it. That ends up not being the case.

Down the road, the convoy slows down to gingerly pass a tipped truck. &#8220;Maybe ambush?&#8221; a soldier says. The same cautious approach repeats itself when the soldiers come across a man changing a tire, but there is nothing sinister about it and they press on for Varner.

Once behind the concertina wire, there is a noticeable sense of relief, though the soldiers know they still have a 40-mile drive back to Lagman. But for now, Camp Dracula raises their spirits.