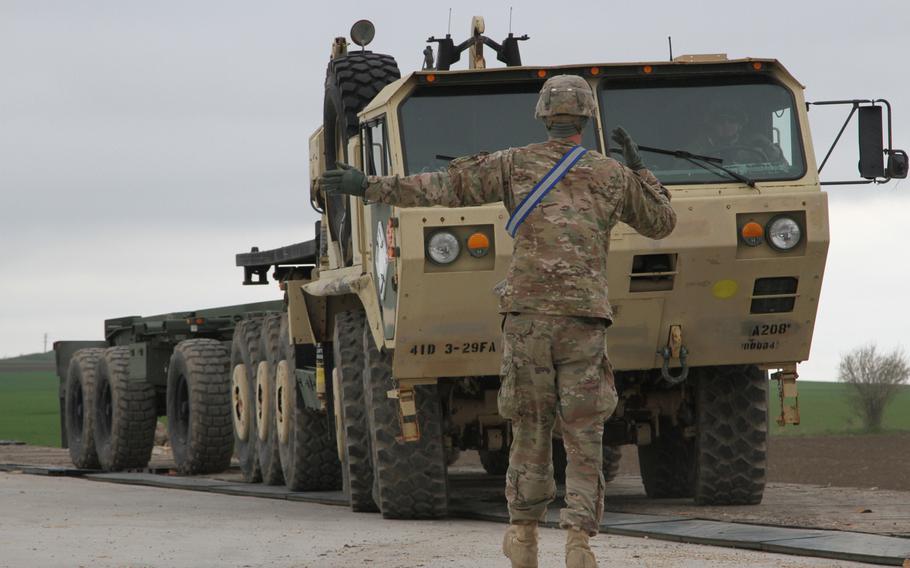 A palletized load system vehicle is one of the first vehicles unloaded from a train at Mihail Kogalniceanu Air Base in Romania on April 7, 2017. The downloaded vehicles will support NATO's Operation Atlantic Resolve and Saber Guardian exercise. (Nicholas Vidro/U.S. Army)

A palletized load system vehicle is one of the first vehicles unloaded from a train at Mihail Kogalniceanu Air Base in Romania on April 7, 2017. The downloaded vehicles will support NATO's Operation Atlantic Resolve and Saber Guardian exercise. (Nicholas Vidro/U.S. Army) WIESBADEN, Germany — A team of Virginia-based soldiers is taking up residence at a strategic Romanian post this spring where they will manage the flow of large-scale troop deployments as the Army here prepares to intensify its operations in southern Europe.

Elements of the 497th Combat Sustainment Support Battalion, out of Salem, Va., arrived in Romania on March 28 and are taking over operations to ensure that hundreds of troops mobilized at the base are able to carry out their mission.

“Right now we’re the execution platform for the battalion,” said Maj. Rickey Haskins, executive officer of 497th CSSB. “We will be heading out before the maneuver battalions, set up operations and make sure things are up and running.”

Romania’s Mihail Kogalniceanu Air Base, called MK for short, will be a major logistical hub for U.S. and other NATO forces in the region as they prepare for a major multinational exercise, Saber Guardian, set to take place in July this year.

However, U.S. Army Europe often must tap into the Reserve ranks for sufficient manpower to carry out its growing mission. Under operation Atlantic Resolve, forces are rotating in from the U.S. to augment a forward-based Army that has shrunk over the years.

At MK, the reservists will work alongside the 1st Battalion, 8th Infantry Regiment, part of the Army’s rotational brigade in Europe, the Marines’ Black Sea Rotational Force, as well as several UH-60 Black Hawk helicopters and some 50 troops from the Army’s 10th Combat Aviation Brigade. On April 7, M109A6 Paladin howitzers from 3rd Battalion, 29th Field Artillery Regiment were unloaded at the base.

Because of its strategic location near the Black Sea coast and Danube River, as well as its more than 2-mile-long runway, the base has long been a transit point for U.S. forces. This started in 1999 and was greatly expanded in 2003, when MK became one of four Romanian bases used to stage and move troops and equipment to and from Iraq.

During the past year, the Army has taken on a larger role in ensuring troops have the things they need, having taken over garrison operations in 2016.

“We have a philosophy — Spartan plus WiFi,” Michael D. Formica, Installation Management Command-Europe director, said last year when IMCOM took over operations at MK and Bulgaria’s Novo Selo Training Area. “We’re not building little Americas inside those camps. We’re going to make sure we have those essentials covered.”

The additional personnel and equipment coming this year aren’t putting too much of a strain on the large base, said Capt. Jeff Browne, commander of Task Force Warhammer South, part of the 16th Sustainment Brigade which is helping integrate the 497th CSSB before returning to its home station of Baumholder, Germany.

“There’s no new construction or anything along those lines, but there is still a little work to be done on what is the current motor pool,” he said. “We’re working with the Romanians to ensure we don’t step on any toes.”

Romania — a former Soviet bloc nation that joined NATO in 2004 — is proving to be a pivotal member of the alliance in eastern Europe.

While crucial in the buildup and staging of troops, MK won’t be nearly as crowded in July as resident units and equipment move to the field in Romania, Bulgaria and Hungary for the 25,000-strong Saber Guardian exercise.