Romania reality: ‘MK’ is working out for U.S. 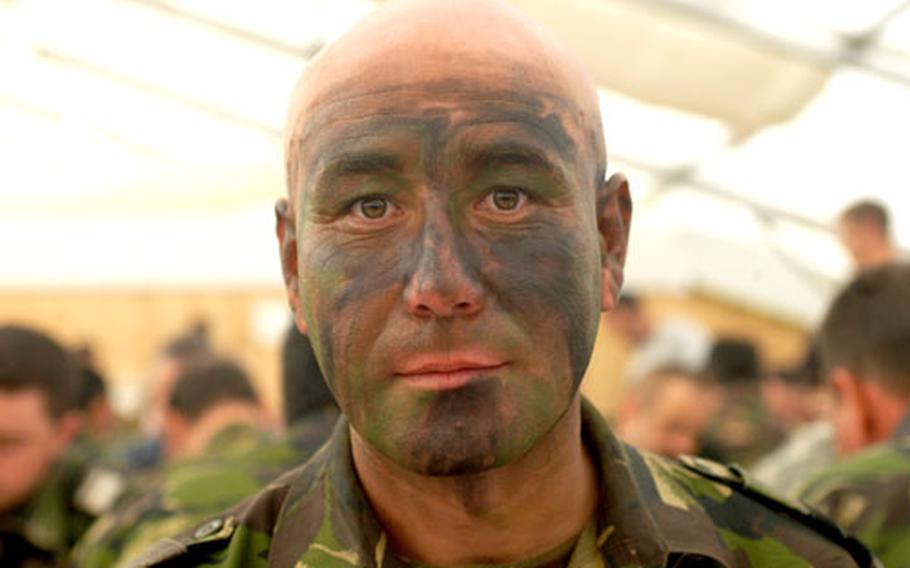 A Romanian sergeant at lunch in the Mihail Kogalniceanu air base, before a demonstration with his soldiers designed to showcase their fighting know-how and resolve. (Nancy Montgomery / S&S)

A Romanian sergeant at lunch in the Mihail Kogalniceanu air base, before a demonstration with his soldiers designed to showcase their fighting know-how and resolve. (Nancy Montgomery / S&S) Romanian Army Capt. Cibrian Balicia — who&#39;s spent time in the U.S., speaks English fluently and has been told he resembles the actor Alec Baldwin — said having U.S. soldiers in Romania would be useful for military and economic development. (Nancy Montgomery / S&S) A newly-named street on the Mihail Kogalniceanu air base in Romania shows that the U.S. has arrived. (Nancy Montgomery / S&S) 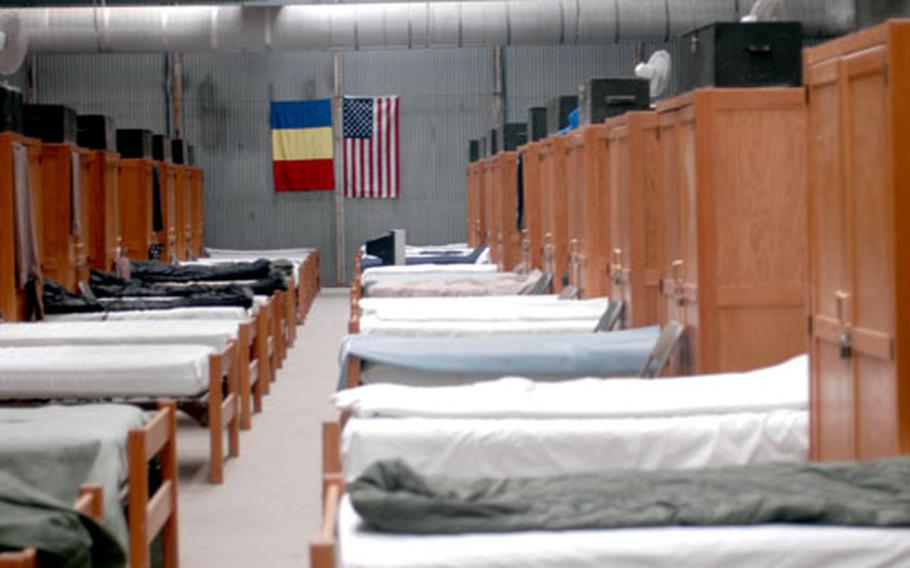 Some 70 soldiers sleep in each of the portable buildings brought to Mihail Kogalniceanu air base in Romania from Kosovo. Romanians training with U.S. soldiers sleep there as well. Their cots have noticeably fewer pairs of shoes underneath. (Nancy Montgomery / S&S)

Capt. Cibrian Balica pondered his hopes that his Romanian sergeants would learn to be as responsible as American sergeants. &#8220;Officers in Romania have to do everything,&#8221; he said.

Four years after the first public announcement that a large segment of U.S. forces would be leaving Germany for U.S. and Eastern European bases, the idea is getting its first reality test.

Called &#8220;Proof of Principle,&#8221; the exercise placing a battalion of U.S. artillerymen on an austere Romanian air base to train and live with some 100 Romanian infantrymen, began in August. It is intended to enhance joint training and &#8220;interoperability&#8221; with a new NATO member and partner in the &#8220;coalition of the willing,&#8221; which, eager for U.S. military aid, has cooperated fully with U.S. efforts in the war on terrorism.

It also was intended to test the capability of the Joint Task Force East, a new U.S. Army Europe subordinate command, to support those and future troops adequately, if not in the manner to which they&#8217;d become accustomed in Germany.

Establishing a presence in Romania means meeting some significant strategic goals for the U.S., Hunzeker said.

Among them are those stated in 2003 by then-U.S. European Commander Gen. James Jones but thought about far longer: how to reshape theater security engagement in a post-Cold War world.

He talked about less expense by bringing units back to the U.S. and moving them for shorter periods to smaller, Spartan bases &#8212; which also are closer to the Middle East, the Balkans and Africa &#8212; and not positioned like those in Germany for a defunct Cold-War constraint against the Soviet Union.

Much of that thinking holds true, Hunzeker said.

But the Romanian base is configured for training, not as a forward operating base, Hunzeker said. Troops could not currently deploy to trouble spots from there, he said.

The Romanian-U.S. operations at the base have upset last century&#8217;s major U.S. foe &#8212; Russia &#8212; which has assailed the base as a global threat that could increase tensions in the region, according to the International Herald Tribune. President Vladimir Putin cited the facility as one reason Russia recently decided to suspend membership in an important defense agreement, the Conventional Forces in Europe treaty, the newspaper said.

More than halfway through the exercise, Americans and Romanians seemed to agree that things were going well.

U.S. troops said that despite basic-training-type living conditions for three months in large metal buildings, working six days a week and having their off-duty time more restricted than in Germany, they&#8217;ve enjoyed training in Romania. They point out it&#8217;s far less onerous than going to Iraq or Afghanistan.

The Romanians seemed friendly and eager, U.S. troops agreed, if not all proficient in English. Pointing worked well, they said. And soldiers said they also were impressed by some Romanian tactics, such as the way they clear a building. &#8220;We&#8217;ll kick obstacles out of the way. They&#8217;ll go over it and around it,&#8221; said Staff Sgt. Jeremy Staffer. &#8220;When they explained it, it made sense: booby-traps.&#8221;

V Corps Sgt. Maj. Ralph Beam said that training was on track but more support was needed for soldiers&#8217; quality of life.

Equally important, U.S. troops also would bring money and jobs to the surrounding communities, he said.

Balica, who said the key to the Romanian character was that &#8220;the Romanian will be able to make a joke on his most miserable day,&#8221; said he couldn&#8217;t think of a downside to the American presence.