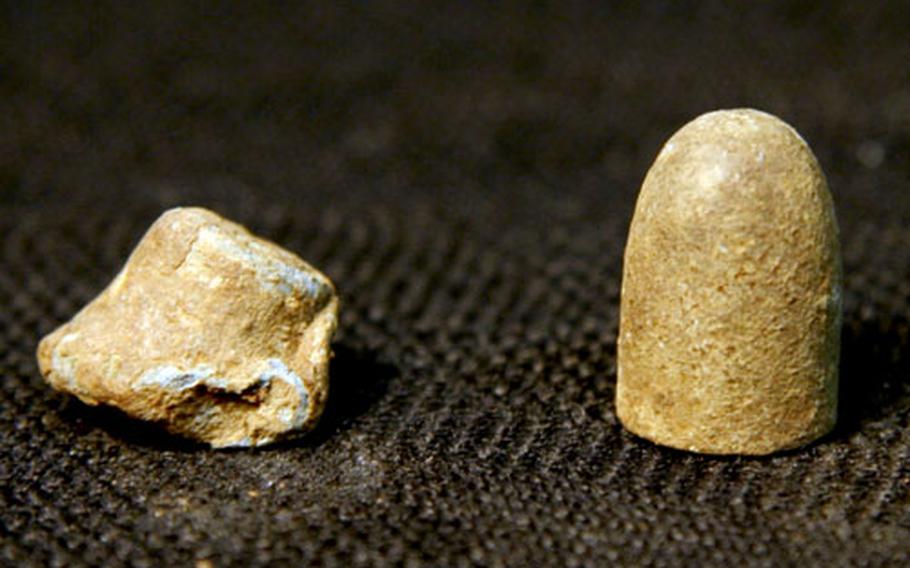 Two slugs believed to be from Sgt. Alvin York’s Colt .45 were found by Lt. Col Doug Mastriano this week in France. He believes they provide conclusive proof of the specific World War I site where the actions that earned York the Medal of Honor took place. (Courtesy of Kory Oâ™Keefe)

An Army officer pursuing the exact spot of the legendary feats of the greatest hero of World War I says he&rsquo;s got the smoking gun &mdash; or in this case, the 90-year-old bullets &mdash; to prove his claim.

Lt. Col Doug Mastriano said that on Sunday he&rsquo;ll show the two rounds he found a week ago in the French forest and that he believes are from Sgt. Alvin York&rsquo;s Colt .45.

&ldquo;There&rsquo;s no other account of anyone firing a pistol in that area,&rdquo; said Mastriano, who works for NATO in Heidelberg and has spent thousands of hours researching York&rsquo;s exploits in archives and the Argonne.

Mastriano plans to hold a news conference with the rounds and other evidence at 2 p.m. Sunday at the Meuse-Argonne American Cemetery in Romagne, France. He said he expected some French reporters, The Associated Press and the New York Times, which wrote a story about his work a few months ago.

Mastriano is not the only one fascinated by York.

In April, after a group of academics, primarily from York&rsquo;s home state of Tennessee, issued a claim with 80 percent certainty that they had found the spot, Mastriano said the group had gotten it wrong &mdash; by an entire valley.

It was that group, &ldquo;The Sergeant York Project 2006,&rdquo; which decided that what would settle the matter was long-elusive pistol rounds or shell casings, Mastriano said. &ldquo;I don&rsquo;t agree you need to find the rounds,&rdquo; he said. &ldquo;Before we found them, I was convinced we were right on.&rdquo;

But when he found them last Saturday &mdash; buried in the earth at an appropriate depth and with the look of 88-year-old bullets &mdash; along with buttons and other evidence, all congruent with historical testimony and terrain analysis, Mastriano decided to alert the media.

&ldquo;How I see it unfolding is the (other) team will look at our finds, and they&rsquo;ll be convinced and compelled,&rdquo; Mastriano said. &ldquo;It&rsquo;s undeniable.&rdquo;

York, a corporal and a crack shot, is credited with taking out a group of German machine-gunners, killing 25 German soldiers and capturing 132 others with only seven other surviving U.S. soldiers, a Springfield rifle and a .45-caliber pistol for help.

But precisely where in the French Argonne region, near the little town of Chatel Chehery, York performed his feats in October 1918 has never been identified.

York earned the Medal of Honor for his feats, became an American legend and had Gary Cooper play him in a movie named after him. According to biographies, the devout Christian who once applied for status as a conscientious objector remained ambivalent about killing enemy soldiers and said he did so only to save more lives.