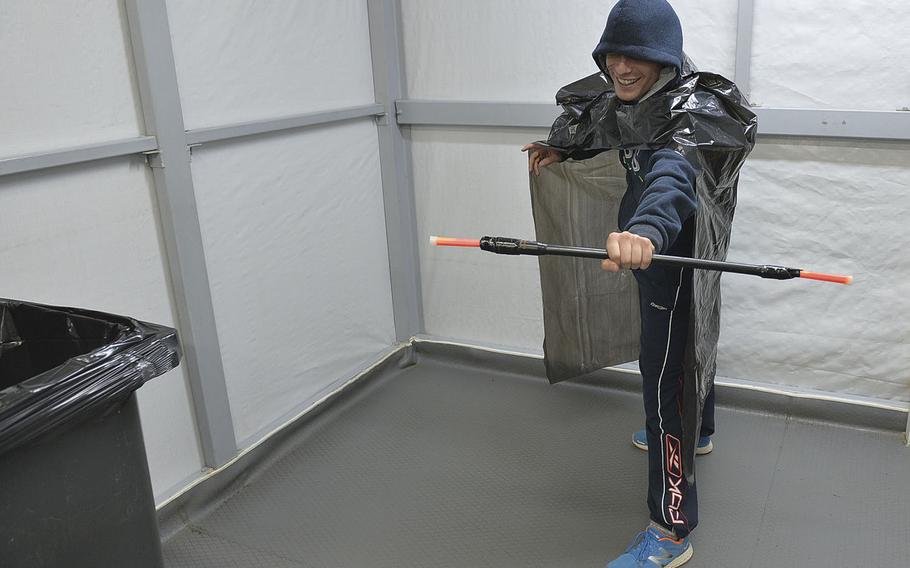 Buy Photo
This British soldier dressed up in a makeshift Darth Maul costume made of a trash bag for a showing of ''Rogue One: A Star Wars Story'' at a coalition base at Irbil International Airport in Iraq, Jan. 6, 2017. Troops here had to wait three weeks after the release date to see the movie, but some said that only built up their anticipation. (Chad Garland/Stars and Stripes)

Buy Photo
This British soldier dressed up in a makeshift Darth Maul costume made of a trash bag for a showing of ''Rogue One: A Star Wars Story'' at a coalition base at Irbil International Airport in Iraq, Jan. 6, 2017. Troops here had to wait three weeks after the release date to see the movie, but some said that only built up their anticipation. (Chad Garland/Stars and Stripes) 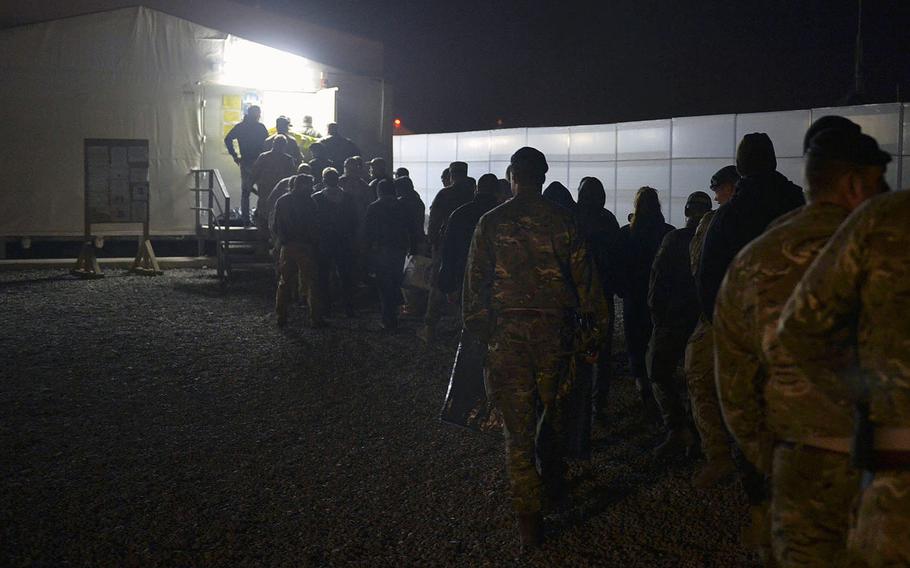 Buy Photo
Troops at a coalition base at Irbil International Airport line up for a special screening of ''Rogue One: A Star Wars Story'' on Jan. 6, 2017. The screening of first-run films close to their U.S. release dates is arranged through a partnership between the Walt Disney Co. and the Army and Air Force Exchange Service. (Chad Garland/Stars and Stripes) 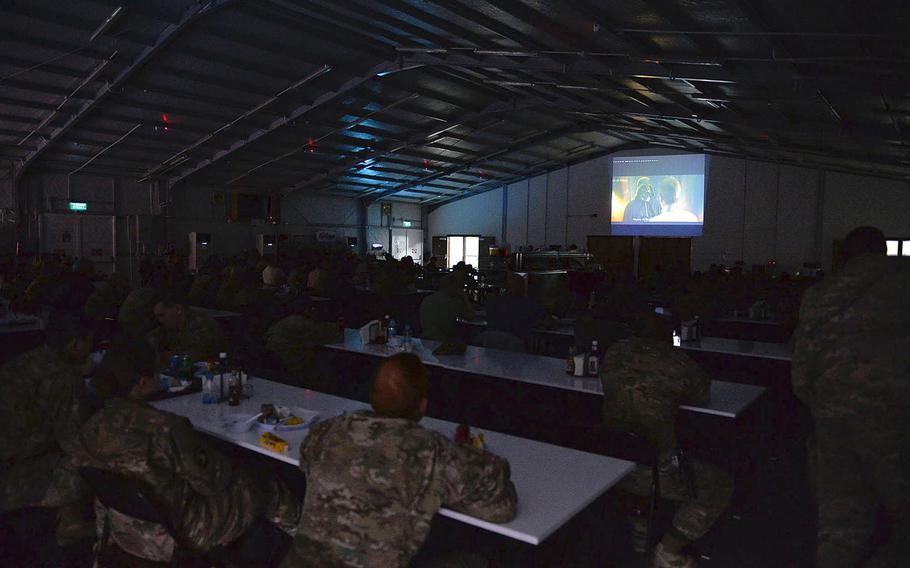 Buy Photo
Troops at a coalition base at Irbil International Airport watch a special screening of ''Rogue One: A Star Wars Story'' during Friday-night chow on Jan. 6, 2017. (Chad Garland/Stars and Stripes) 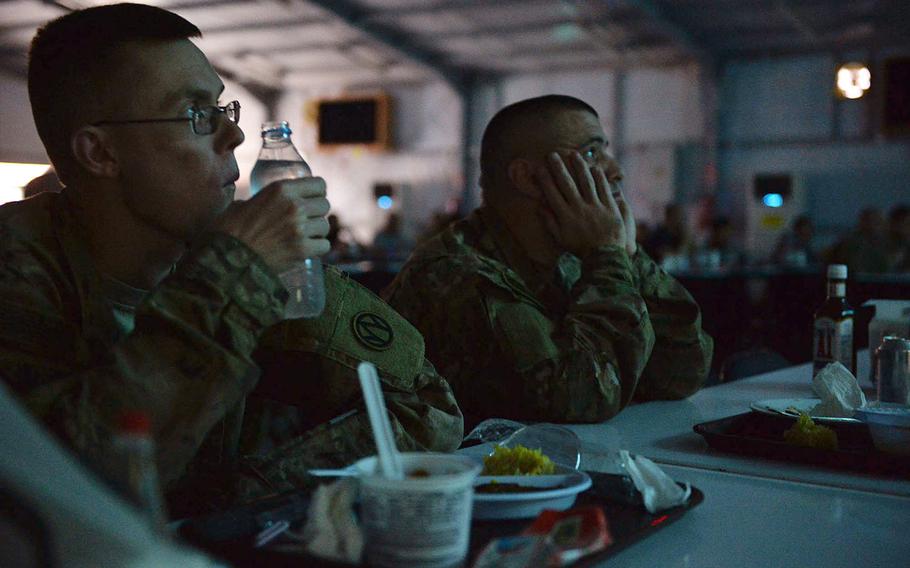 Buy Photo
Staff Sgt. Jonathan Broyles, left, and Staff Sgt. Brandon Lund watch ''Rogue One: A Star Wars Story'' during a special screening for U.S. and coalition troops at Irbil International Airport in Iraq on Jan. 6, 2017. Troops said the showing breaks up the monotony of life on deployment and gives them a chance to talk about something other than work with family back home. (Chad Garland/Stars and Stripes) 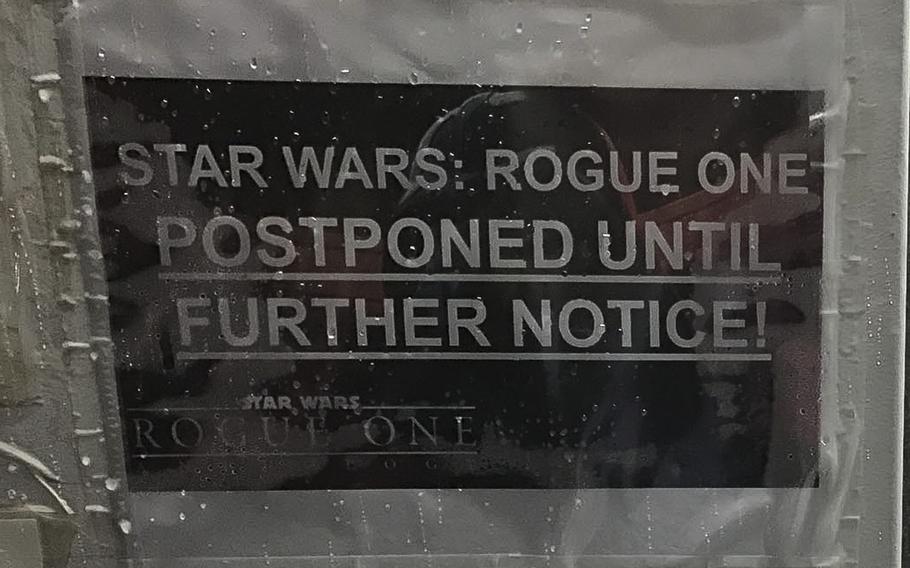 Buy Photo
A sign at the dining facility on a coalition base at Irbil International Airport, pictured here on Sunday, Dec. 25, 2016, informs servicemembers that special showings of the latest ''Star Wars'' film, ''Rogue One,'' would be postponed indefinitely. Operational and weather conditions delayed the screening in Irbil. (Chad Garland/Stars and Stripes)

IRBIL, Iraq — U.S. troops and their allies on a military base here were told in late December that special showings of “Rogue One: A Star Wars Story,” slated to coincide with the movie’s U.S. theatrical release just before Christmas, would be delayed indefinitely. It was a dark time for the forces.

“Rogue One” had been screened in December for troops at Bagram Air Field in Afghanistan, a training center in Jordan, and camps in Baghdad, Taji and Al Assad, Iraq. But weather and operational conditions made it a challenge to fly the film and its custodian from southern Iraq to Irbil, officials said.

“It’s just built the anticipation for the movie,” said U.S. Army 1st Lt. Nicolette Pizzo, 24, of Bridgeton, N.J., who helped arrange the showing when the film finally arrived last week. She said it would be the first “Star Wars” movie she’s seen. “We’ll see if I get brought into the culture of it all.”

For longtime fans like U.S. Army Sgt. Brandon Lund, 30, a chaplain’s assistant from Muskogee, Okla., the delay meant continuing an embargo on potential “spoilers” — details of the plot or story that might ruin their experience of the film.

“We’ve intentionally avoided rumors,” Lund said. A British chaplain who had seen the film in Cyprus was warned not to say a word about it.

Lund was near the front of the line for the first screening during Friday-night chow at one of the base’s dining facilities. “We’re all pretty pumped.”

Most in the audience wore military uniforms, unlike stateside screenings where “Star Wars” enthusiasts often dress as heroic Jedi knights or insidious Sith lords. But at a second showing, one British soldier donned a trash bag as a makeshift cape and wielded a black pole with two red light sticks taped to both ends — an homage to Darth Maul, a villain in an earlier film who carried a dual light saber.

“Rogue One” is the third first-run movie the Walt Disney Co. has screened for deployed troops in partnership with the Army and Air Force Exchange Service. Phil Tinsley, who manages the Central Command area for the exchange service and escorted the film DVD throughout Iraq, said he hoped Disney would also send next year’s installment on a tour.

The latest film is set shortly before the events of the original 1977 “Star Wars: A New Hope.” It tells the story of a mission to obtain secret plans for the Galactic Empire’s ultimate weapon — a “planet killer” space station called the Death Star — which helps Luke Skywalker destroy it in that first film.

Early on in the film, the action centers on a desert outpost where military ships hover above an ancient city and militant extremists ambush patrols of government troops on narrow streets. Operatives there as part of a coalition struggling to restore freedom to the galaxy are seeking a recording that will give them hope.

In other words, it’s a war movie set in a long-ago time and faraway galaxy that bears some similarities to the here and now, where U.S. forces are supporting the Iraq-led campaign against the Islamic State group.

But some troops here, where the whirring of helicopter rotors could occasionally be heard outside the dining facility, said the movie offered an escape from the daily stress and monotony of deployment life. Pizzo said it allows troops to talk about something other than work when they call back home.

“It just gives people a connection,” she said. “Something the parents can talk to their kids back home about.”

The movie has already been showing in Irbil proper, but that’s no consolation to most U.S. troops here, who can’t leave the base for such activities.

Fifteen-year Marine Corps veteran and explosive ordnance disposal contractor Ernie Barajas saw it in a nearly empty theater at the appropriately named Empire Cinemas, in a mall across town on the Monday before Christmas. He took his girlfriend, visiting from Huntsville, Ala., another treat he said he’d never experienced during tours in Iraq and Afghanistan while on active duty.

Still, he said, going to see “Star Wars” films has been a family event since he began taking his children to see them at a base theater years ago. “We would love to be home watching ‘Rogue One.’”