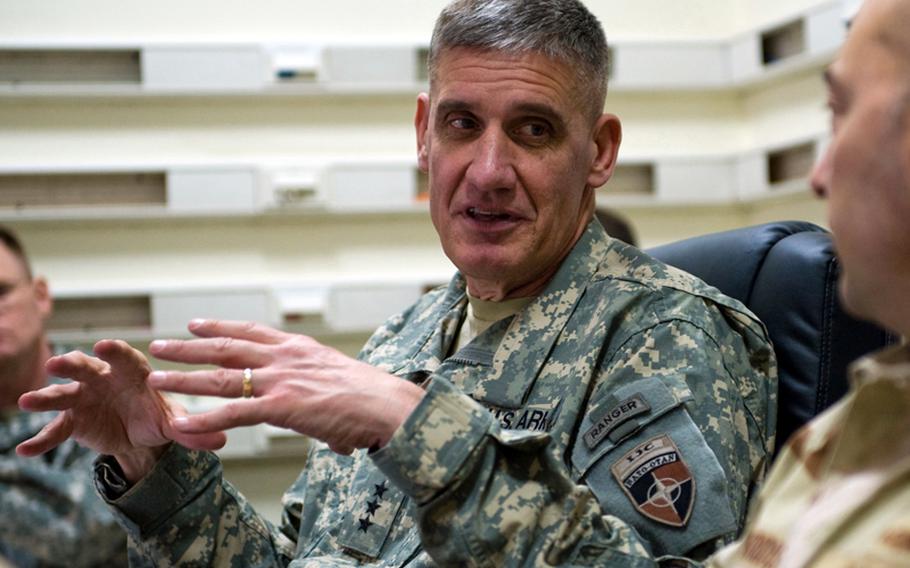 WASHINGTON &ndash; The Afghanistan War&rsquo;s daily operational commander said Wednesday that U.S. troops and their mission were put under no &ldquo;unnecessary risk&rdquo; by President Barack Obama&rsquo;s drawdown plan, which will begin with two Army units this summer and the first unit of combat Marines this fall.

&ldquo;I&rsquo;m confident that we can draw down those troops through the end of this year and accomplish our mission,&rdquo; said Lt. Gen. David Rodriguez, deputy commander of U.S. Forces-Afghanistan and commander of International Security Assistance Force Joint Command.

Arizona Sen. John McCain, ranking Republican on the Senate Armed Service Committee, told troops he was visiting in Afghanistan this weekend, &ldquo;The President&rsquo;s decision was made without recommendation from our military commanders, and I believe it poses an unnecessary risk.&rdquo;

While McCain had used the phrase before his trip, he raised eyebrows back in Washington for criticizing the commander-in-chief&rsquo;s order in front of troops deployed in the war zone.

Rodriguez, speaking to Pentagon reporters Wednesday via satellite from Kabul, said he did not agree with the characterization.

&ldquo;The decision has been made and now it&rsquo;s our turn to execute the decision. And we can do that without a significant change in risk.&rdquo;

Rodriguez on Wednesday identified the first combat unit of the surge to come home as the 1st Marine Division, 7th Marine Regiment, 3rd Battalion, 4th Marines. More than 800 Marines will begin leaving later this fall, and some will have their tour curtailed, Rodriguez said.

The Army National Guard&rsquo;s 1st Squadron, 134th Cavalry Regiment (about 300 troops) and its 1st Squadron, 113rd Cavalry Regiment (about 500 troops) in Parwan will not be replaced when they leave as scheduled in July, Pentagon officials said. They are part of the Iowa National Guard&rsquo;s 2nd Infantry Brigade Combat Team, 34th Infantry Division.

Rodriguez is scheduled to come home July 11 after spending more time commanding the Afghanistan War than any other U.S. general. He typically speaks of the war operations positively yet realistically, and on Wednesday, he gave a particularly staunch defense of the counterinsurgency mission.

&ldquo;Progress is indisputable,&rdquo; he said. &ldquo;Where we have focused our efforts, we have degraded the insurgency, built the Afghan National Security Forces and ultimately mobilized many of the Afghan people against those who have threatened their way of life.&rdquo;

Despite violence and coalition casualties rising across the country, Rodriguez said he believed that decreasing the U.S. troop presence did not put the war mission at risk for two reasons: The effectiveness of enemy attacks has decreased, and Afghan force capabilities have increased.

He detailed a 300 percent rise in the number of weapons and supply caches found this spring, severely cutting off the insurgency&rsquo;s planned offensive, and he repeatedly stressed that 70,000 additional Afghans are expected to surge while the U.S. pulls out 33,000 by the end of next summer.

&ldquo;We will do less of the direct, lower-level fighting,&rdquo; he said, and shift to &ldquo;enabling&rdquo; roles of command and control functions.

While Rodriguez remains focused on operations inside of Afghanistan, Pakistan must continue to do more on its side of the border.

&ldquo;What we really need is less of the IEDs and the homemade explosives across that border, as well as some of the bomb makers and leadership that moves across that border,&rdquo; he said. &ldquo;We&rsquo;ve seen that in selected areas, but again, not as much as we&rsquo;d like.&rdquo;