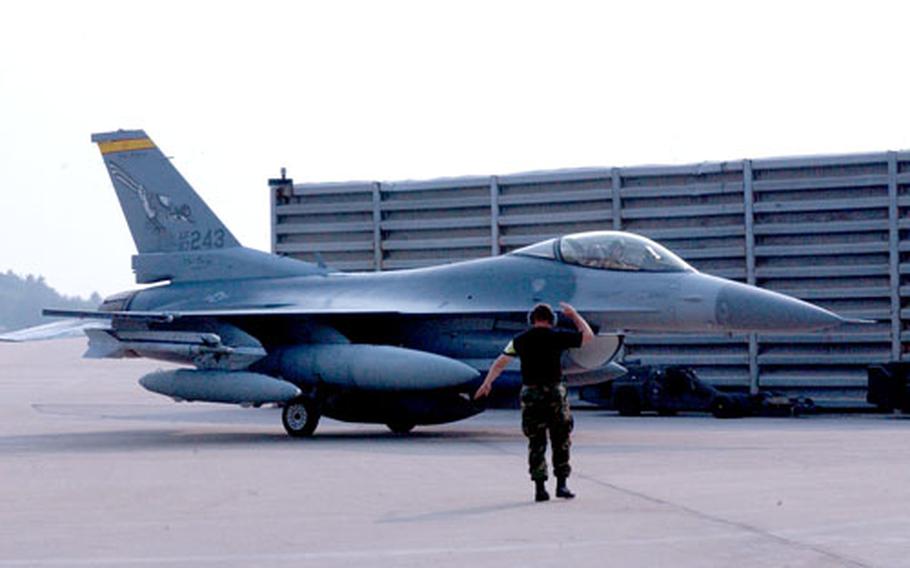 A crew chief from the 186th Expeditionary Fighter Squadron, nicknamed the Rocky Mountain Coalition, guides an F-16 into place at Kunsan Air Base, South Korea. The squadron is drawn from Air National Guard units from Montana, Colorado and New Mexico and is deployed to Kunsan for a summer of training with Kunsan’s 8th Fighter Wing. (Matt Schwartz / U.S. Air Force)

PYEONGTAEK, South Korea &#8212; Nearly 300 hundred Rocky Mountain region Air National Guard members have begun a summer deployment at Kunsan Air Base, where they&#8217;ll be immersed in the day-to-day rigors of a base known for its tough training tempo and austere conditions.

For the deployment, the Guardsmen and about a dozen F-16 fighter jets have been formed into a unit called the 186th Expeditionary Fighter Squadron, but informally they call themselves the Rocky Mountain Coalition.

The idea for the deployment to Kunsan arose because the runway at Great Falls International Airport in Montana, where the state&#8217;s Air National Guard is based, was to close for five months starting in May for a major upgrade. Guard officials, looking for a way to continue training during the closure, volunteered for the deployment.

Kunsan is home to the 8th Fighter Wing, known also as the Wolf Pack.

The Rocky Mountain airmen will train as they do at home, he said.

&#8220;We expect to conduct both air-to-air and air-to-ground training, emphasizing the different location, the different climate, and working with an active-duty wing,&#8221; he said.