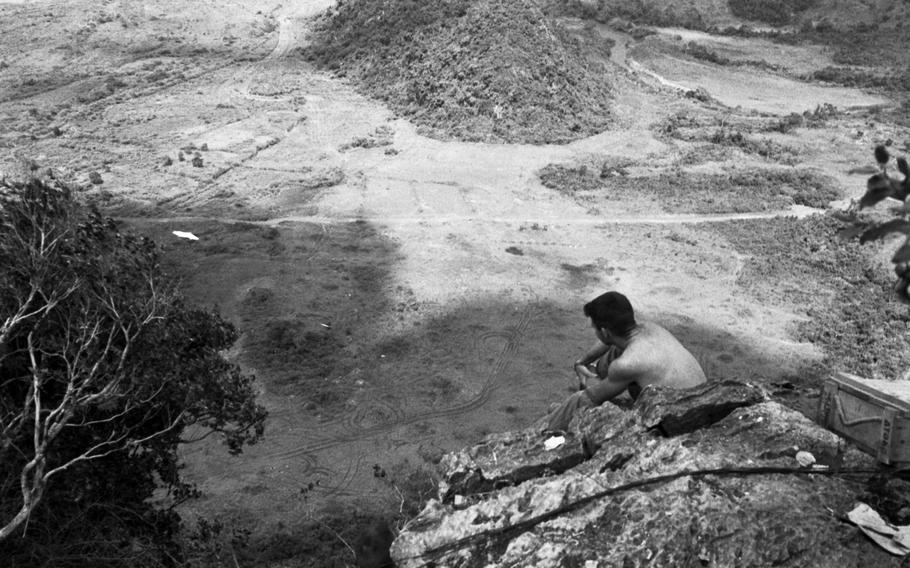 An unknown Marine looks out over a valley from his vantage point atop the Rockpile in November 1966. (Ray Mahon/Stars and Stripes)

An unknown Marine looks out over a valley from his vantage point atop the Rockpile in November 1966. (Ray Mahon/Stars and Stripes) 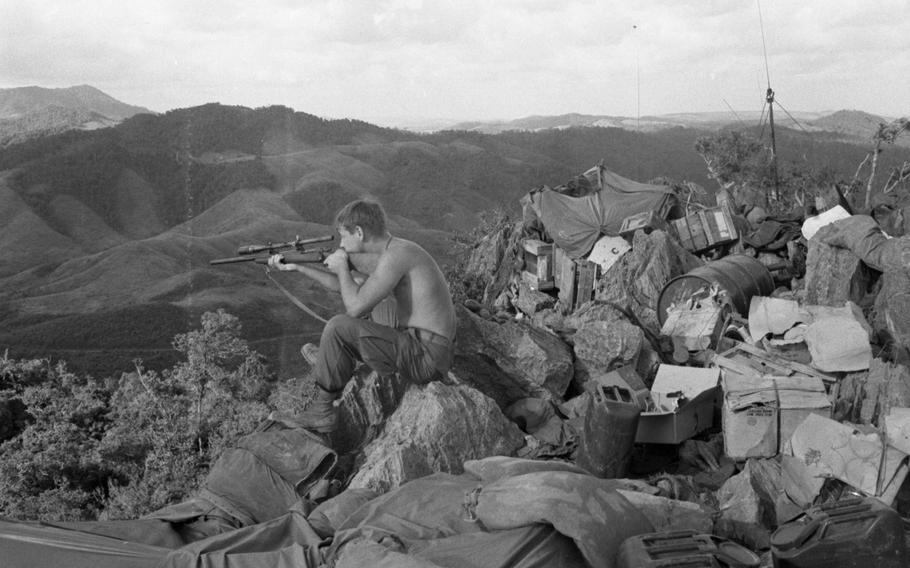 An unknown Marine scans for enemy threats from atop the Rockpile in November 1966. (Ray Mahon/Stars and Stripes) 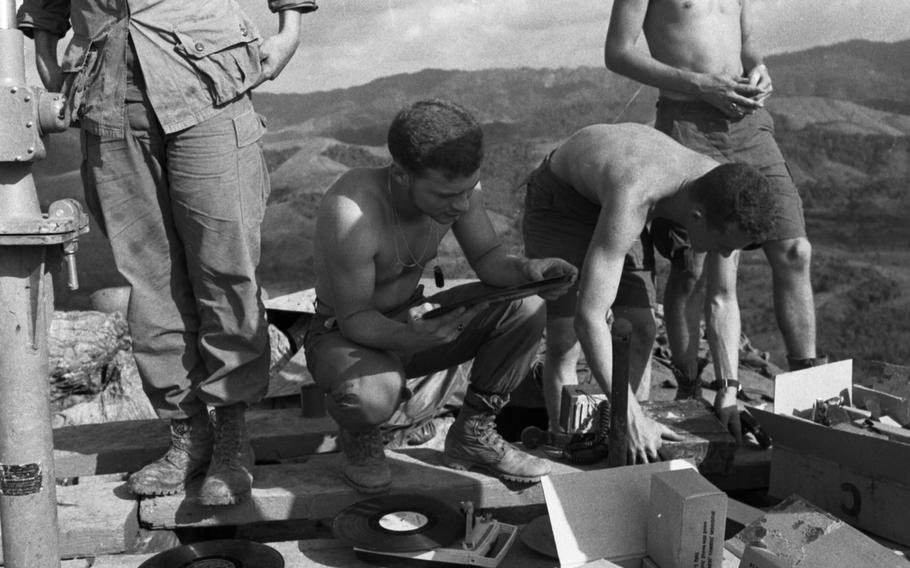 Marines stationed at the Rockpile shuffle through a record collection, looking for some form of entertainment while sitting atop the giant rock formation in November 1966. (Ray Mahon/Stars and Stripes) 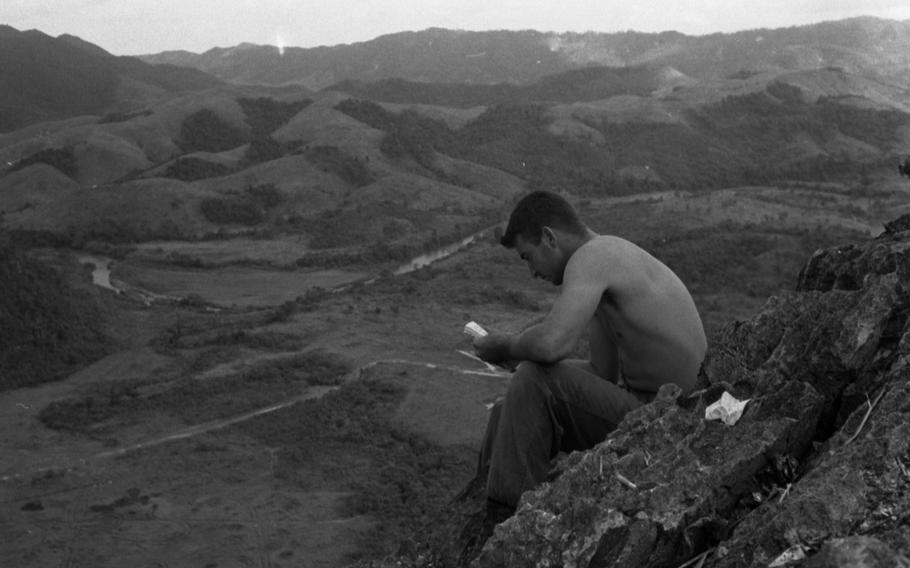 An unknown Marine reads to pass the time while stationed at the Rockpile in November 1966. The Rockpile was a gigantic rock formation in Vietnam that was of some strategic importance and the site of an entrenched American presence in 1966. (Ray Mahon/Stars and Stripes) 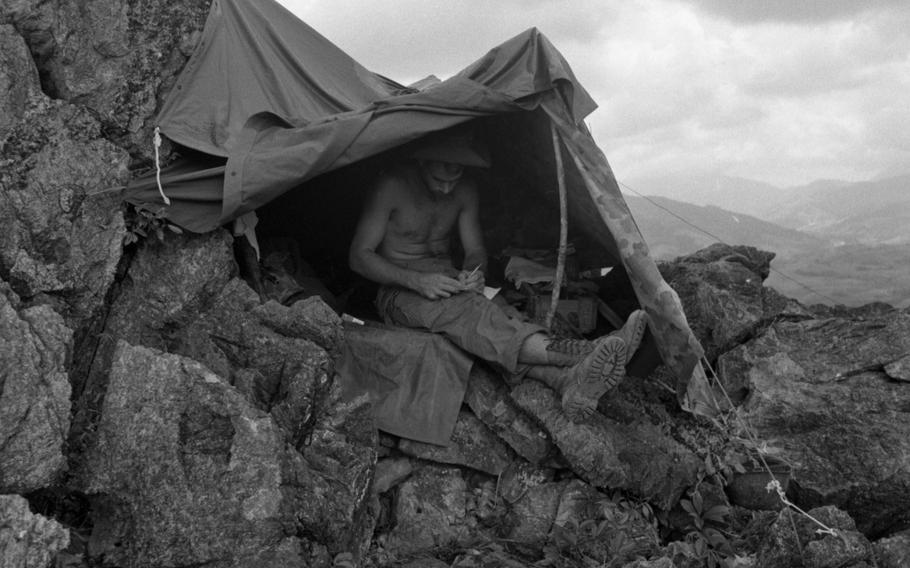 The Rockpile, a 750-foot high rocky formation in Vietnam, was the site of an entrenched American presence in 1966. Here, a Marine writes a letter from atop the outcropping in November 1966. (Ray Mahon/Stars and Stripes)

THE ROCKPILE, Vietnam — It's a freak of nature, a jagged piece of rock shaped like Gibraltar that rises 750 feet in the air. In other wars it could have been called Bunker Hill, Heartbreak Ridge or Pork Chop Hill.

Here, it's the Rockpile.

Some experts will argue its value. They say it's not what it has been built up to be, the North Vietnamese really don't want it, etc. But ask the Marines who died for it. Ask the Marines who are ready to die for it.

The Rockpile was recognized for its strategic importance as early as May 1966. Located at the junction of five major valleys about seven miles south of the DMZ, it holds a commanding view over five valleys, all infiltration routes from north Vietnam.

It is one of three control points the Marines want in the area. The others are Route 9 and the Dong Ha airfield complex.

Marines first came during Operation Hastings last July when an observation team landed on top of the Rockpile. The North Vietnamese immediately attempted to oust the Marines from their roost. Repeated attempts at scaling the Rockpile and pumping mortar rounds into its sides proved fruitless.

With the start of Operation Prairie, the enemy soon found they had other things to worry about. Waves of Marines stormed in and succeeded in wrestling hill after hill away from enemy hands. Anytime the communists moved, recon patrols, aerial observers and observers on the Rockpile blew the whistle.

Infiltration routes through the Cam Lo-Dong Ha area were sealed off, pushing the enemy west forcing them to use trails through higher and more rugged terrain beyond the Rockpile. Today, the Rockpile is considered relatively secure. But the Marines who live here are not as conservative in their views.

"This place is ideal for the guy who has about one month left to go in Vietnam," said a member of a three-man recon team. "He can put his month in up here feeling pretty sure he will make it back to the States in one piece."

The top of the Rockpile is about 40-feet long and 17-feet at its widest point. An enemy force attempting to climb it might reach the top in five hours, exhausted, cut and bleeding from the sharp, coral-like rocks. Even then, they would be reduced to single file squads.

There is just one reasonable access and this is by helicopter, which at times also proves unreasonable. Frequently resupply choppers are unable to get in because of rain, fog and the ever-present winds which often reach 50 m.p.h.

Many times a pilot will risk it when supplies are low. The helicopter, however, will not land, but hover about six or seven feet off the ground while supplies are dropped. Woe be to the replacement who chooses this time to come to the Rockpile.

The LZ is a pallet-like, wooden platform about 6 feet wide. There are 8-inch gaps between the planks so that landing can become a thing of delicacy. The positioning of one's feet when landing is vital. Those who make it are proud, those who don't are sore. An S&S reporter who made the trip was one of the latter. It was a one-point landing, but fortunately on the padded end of his anatomy.

Life on the Rockpile is peaceful and uncomplicated. Throughout the day and night there's the business-like whispers of the radio operators receiving and relaying messages from one unit to another. Few stray from their poncho tents except to stretch their legs or survey the area with the powerful ship's binoculars mounted on the LZ.

There is one tent where the crackling of a radio isn't heard. It's where the sniper team lives. Lance Cpl. Steve Perlewit, a 19- year-old from Green Bay, Wis., is one of the men. Perlewitz doesn't get too much action here although he used to when he was assigned to ground units.

The enemy apparently realizes this and they stay well beyond the range of his rifle with its powerful telescopic sights.

Tours here range from seven days to two months. It offers pros and cons. Some extend their tours here, others are glad to see the chopper land and take them off. Entertainment is nil unless you want to read a book, chat with a buddy or watch the night air and artillery strikes on hills nearby.

The Rockpile is best described by the people who live here.

"We'll be here for two weeks or so. After that, we could probably get another team to relieve us, but it's so much trouble to get set up here, that we might as well stay a little longer," said 2d Lt. Gus Donnelly of Ashville, N.C., a forward artillery observer.

His companion, Pfc. Ken Polki, of Milwaukee, says, "One nice thing about it is there's no mud, but I hate to see the choppers come in, even though it's our supplies, because they blow down our tents."

"Five to seven days is enough here," said Lance Cpl. Merle Capps of Richmond, Calif. "Most people can't move around much and you really can't get comfortable on these rocks."

Then, there are guys like Lance Cpls. Mark Choquette of Salix, Iowa, and Jacob Correll of Newark, Del., who sleep on cases of mortar shells.

"We've been here more than a month now and we don't mind staying for another while. You really can save money here," Correll said.

The Rockpile. There's a good chance nobody will want it when this war is over. But it will be remembered.