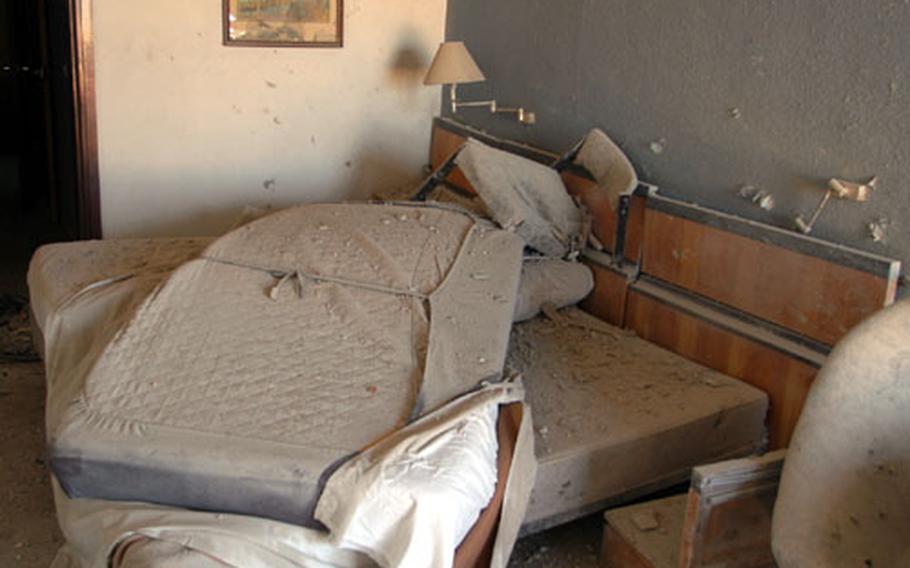 A room on the 15th floor of the Palestine Hotel in Baghdad, Iraq, shows the damage after rocket attacks Friday morning. (Franklin Fisher / S&S)

A room on the 15th floor of the Palestine Hotel in Baghdad, Iraq, shows the damage after rocket attacks Friday morning. (Franklin Fisher / S&S) 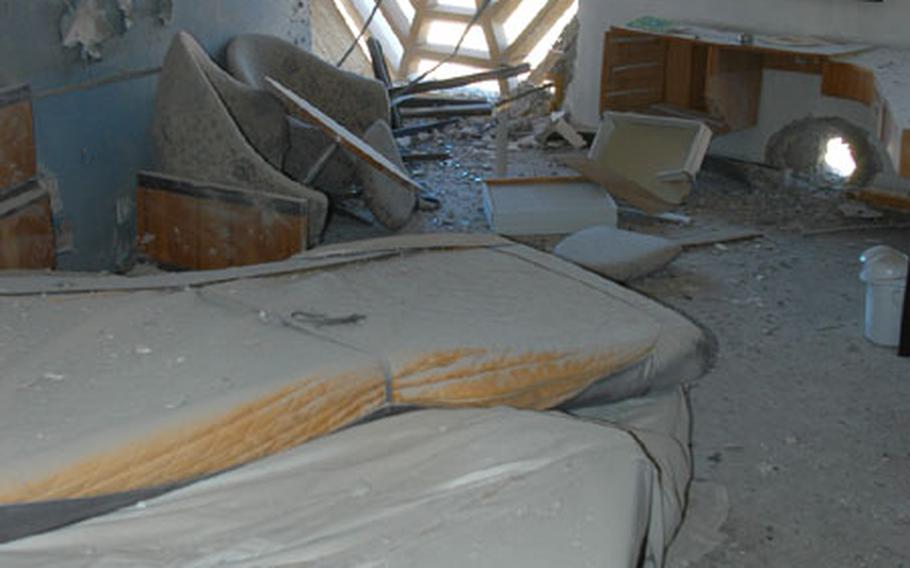 A room on the 15th floor of the Palestine Hotel in Baghdad, Iraq, damaged in rocket attacks Friday. The hole in the wall at the right is where a rocket penetrated the masonry, hurling a chair across the room and overturning a mattress. (Franklin Fisher / S&S) Troops from the 1st Armored Division seal off a street corner in Baghdad, Iraq, Friday morning after finding a donkey cart and some unfired rockets shortly after an attack on the Palestine Hotel about a block away. (Franklin Fisher / S&S) 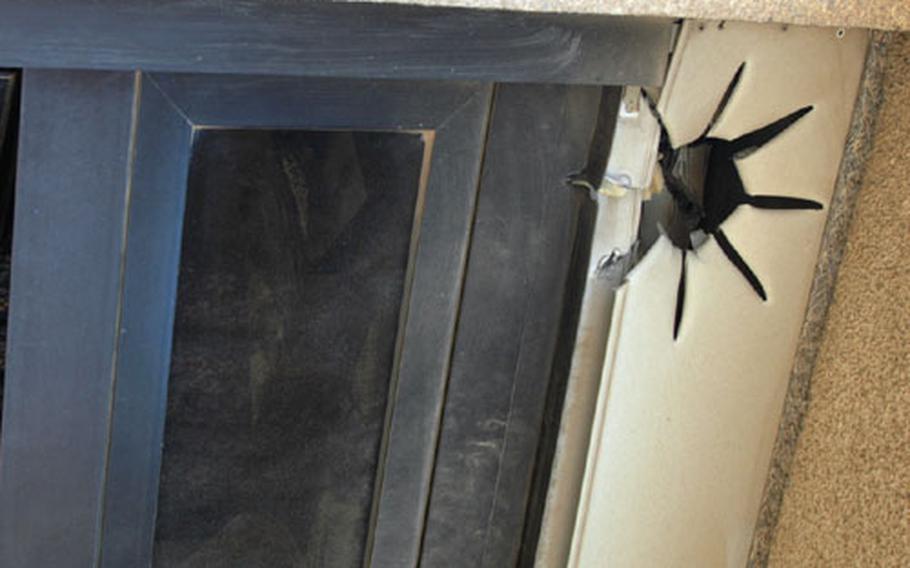 This star-shaped puncture is what&#39;s left after the passage of a rocket&#39;s stabilization fins through a balcony-door frame on the eighth-floor of the Palestine Hotel in Baghdad, Iraq, after rocket attacks Friday morning. (Franklin Fisher / S&S)

The hotel attacks were carried out about 7:20 a.m. on a bright, clear day. The attackers led a donkey cart carrying rockets to a street near the hotels and one outside the Oil Ministry, according to Col. Peter Mansoor of the 1st Armored Division.

Across the street at the Sheraton, the attack knocked out several windows.

At the Palestine, where Stars and Stripes reporters are among the occupants, one person was injured and was rushed from the hotel on a stretcher by private security personnel.

One witness said that the injured man appeared to be a Westerner, perhaps in his late 30s. His body was bloodied and pitted with splinters of glass and other debris. He appeared unconscious.

A British journalist whose room was hit was counting himself &#8220;very lucky&#8221; after escaping unharmed.

The journalist, Anthony Bateman, said he&#8217;d gotten out of bed only five minutes before the rockets hit.

The blast left sharp chips of masonry about the room and the floor and furniture under a whitish film of plaster dust.

A block from the hotel, a large crowd gathered to gape at a singed, stunned donkey and an overturned cart containing unfired rockets. Iraqi police were at the scene and were soon joined by 1st AD soldiers, who flooded the area in Humvees and Bradley fighting vehicles and cordoned it off.

In the attack on the Oil Ministry, witnesses reported hearing five explosions at about 7:30 a.m. Black smoke billowed thickly from the heavily guarded compound. U.S. soldiers kept journalists away.

A ministry official told Dow Jones Newswires that a fire was quickly extinguished and caused no major damage to the building. He said oil production would not be affected.

The attacks came a day after a truck bomb went off near a Kurdish party office in Kirkuk, a northern oil city, killing five people and wounding 30. Local officials blamed that attack on Islamic extremists linked to the al-Qaida terrorist group. It was the second bombing this week against Iraqis cooperating with Americans.

The blast shattered windows and damaged doors. It also blew out windows of a nearby radio-television station.