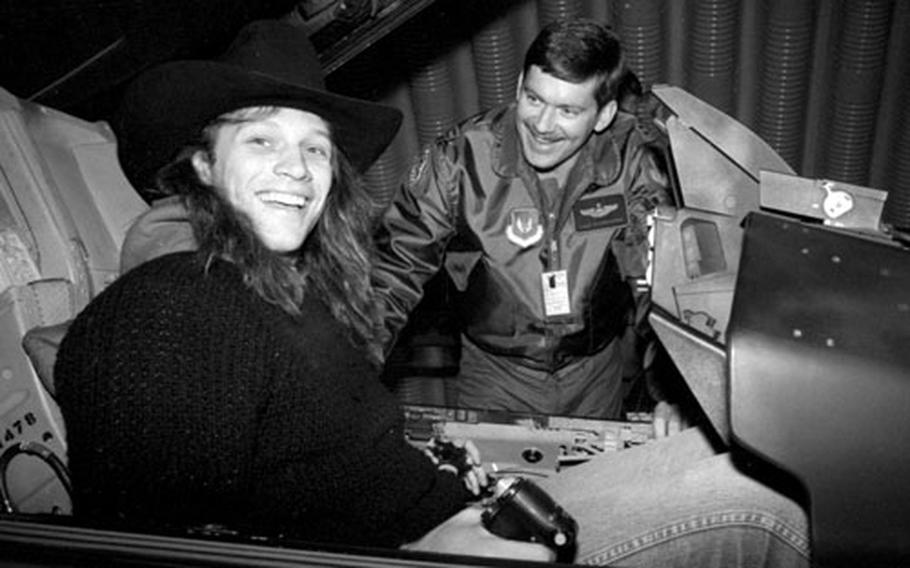 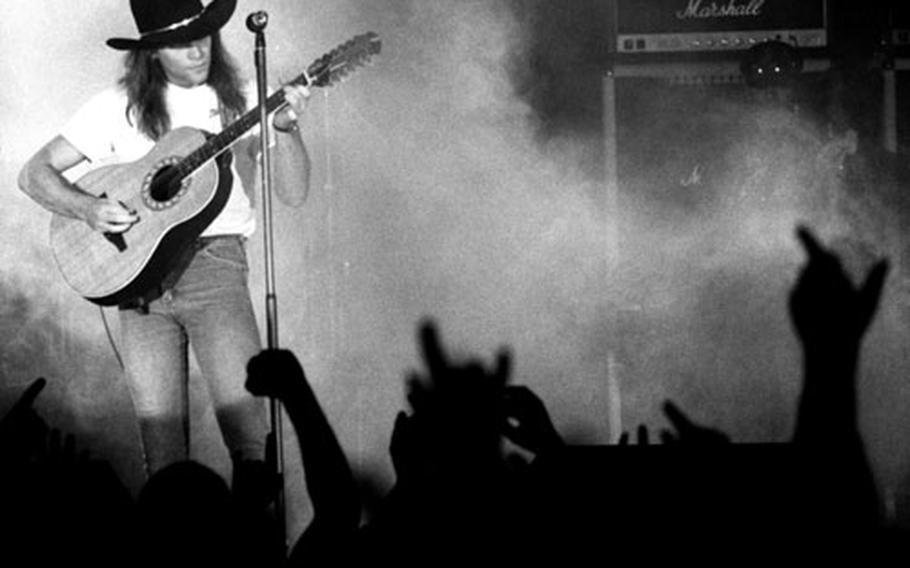 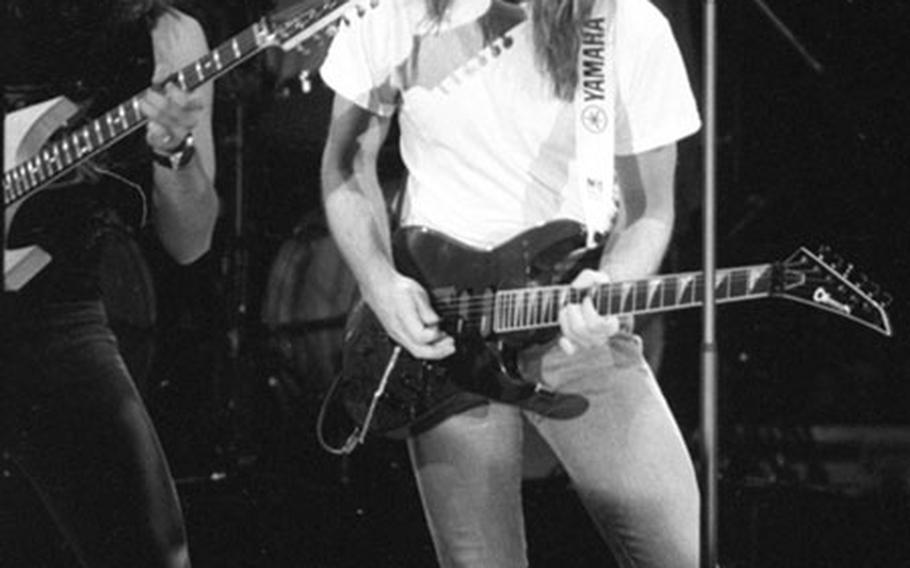 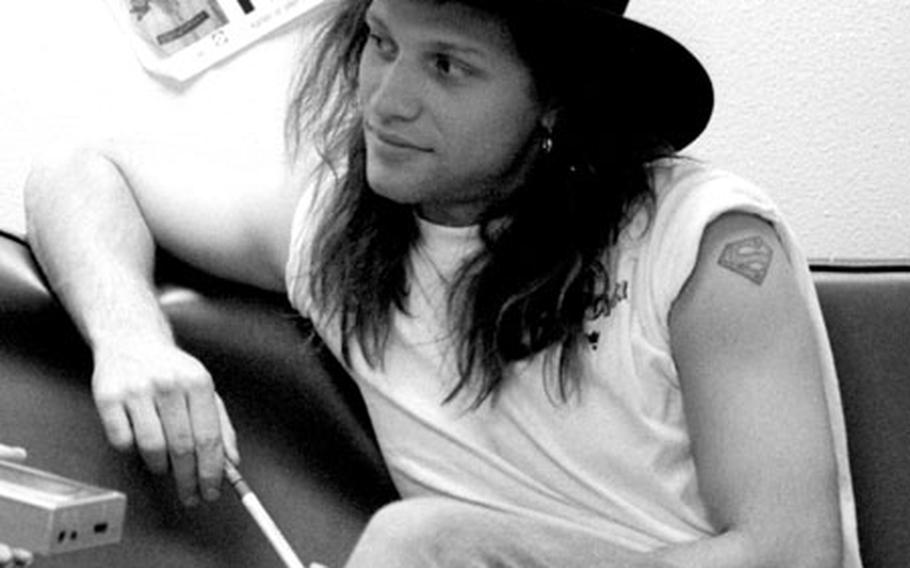 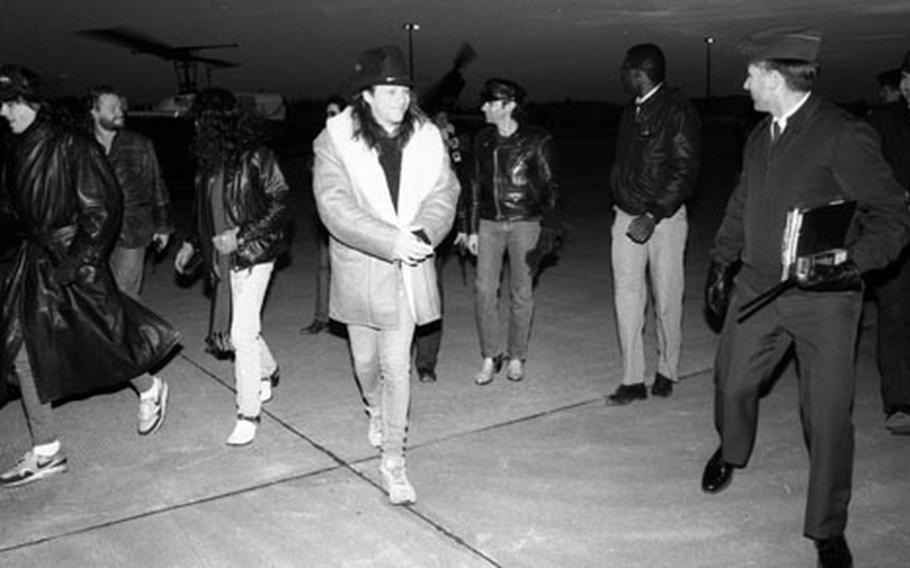 RAMSTEIN AB, West Germany —Two weeks ago, the name Bon Jovi may have sounded like a brand of designer jeans or gourmet chocolate to most top officials at Ramstein AB.

But by Saturday, few at Ramstein didn't know something about the rock band from New Jersey with the top-selling album in the United States.

After a ride on an F-16 simulator and a few minutes in the cockpit of a genuine Fighting Falcon, lead singer Jon Bon Jovi and his four-man band headlined a daylong benefit concert in the base's Hangar One during a day off from their European concert tour.

Proceeds from the concert, which also starred rock guitarist Lita Ford and her band, will go to a fund for victims of the Aug. 28 Ramstein air show disaster in which 70 people died.

The hangar almost seemed destined for a Bon Jovi concert. Painted signs located all over the walls warned: "Slippery When Wet," the title of the band's 1986 bestselling album.

Although Bon Jovi originally was not scheduled to play, the band closed out the concert with a four-song set and invited the crowd members to bring their tickets from the benefit for free admission to the band's Sunday concert in Frankfurt.

"We weren't supposed to play at all, but we wanted to help make the day go a little lighter," Bon Jovi said after the concert.

Although concert coordinators were unsure Saturday about the number of tickets sold, several organizers said the event did not draw a capacity crowd.

"I'd rather have his autograph than go to the concert," said Kimberlee Hodges, a 10-year-old Landstuhl Elementary School student who waited with friends for the star to test the F-16 cockpit.

Bon Jovi told The Stars and Stripes that one victim of the disaster had been scheduled to begin work in his production studio within days of the Flugtag air show.

Ford, who viewed a video of the disaster after arriving at Ramstein for the performance, said she was honored to be asked to perform at the show.

The show lasted more than six hours and included performances by the local groups Backtrack, Mark Patrick, Superior, the Richard Head Band and Esperanza. Additionally, the German band Craaft, on tour with the headliners, made an appearance.

Among those who attended the concert was Air Force Staff Sgt. Maureen Williams, who worked in the morgue after the disaster. Williams said she had come to the event to hear the music, but she also felt the concert was held "for a good cause."

Concertgoer Hank Moseley, a 13-year-old student at Ramstein Junior High School, was at the air show when the catastrophe struck.

"A lot of us wanted to help at Flugtag, but there was nothing we could do," Moseley said.

His friend, Matt Cole, 13, added: "Everybody's really happy that Bon Jovi and Lita Ford had the chance to come here for this. It's really nice to know that people other places know about it (Flugtag) and care."

The Ramstein appearance was not Bon Jovi's first exposure to the military, but it was his initial experience with an F-16.

"Just like my Ferrari," he said while sitting in the plane's cockpit in a shelter at the 526th Tac Fighter Sq. "It's something else. It was a hell of an experience."