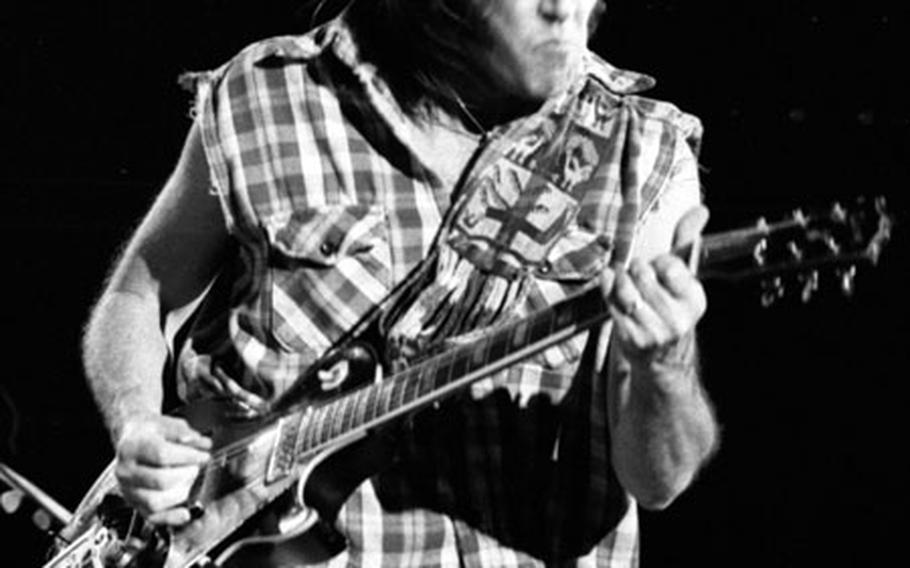 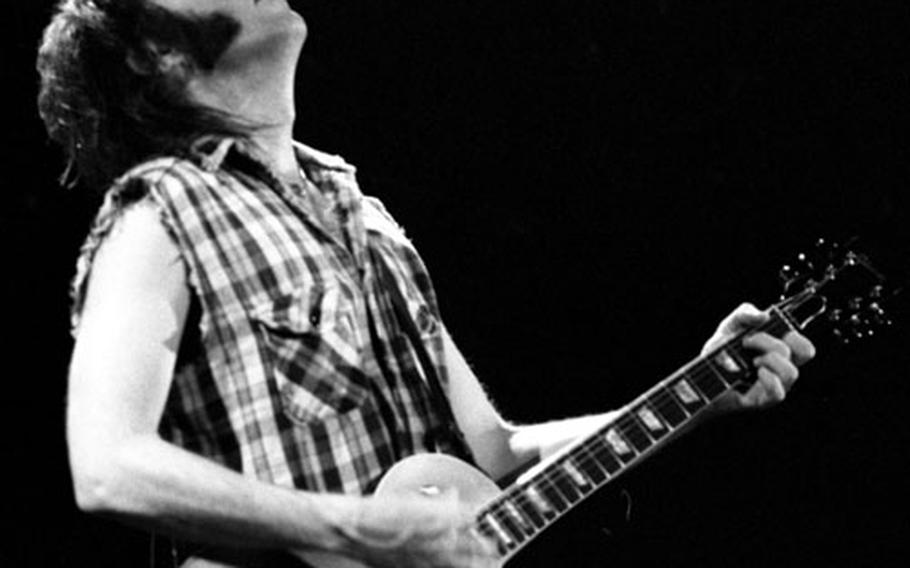 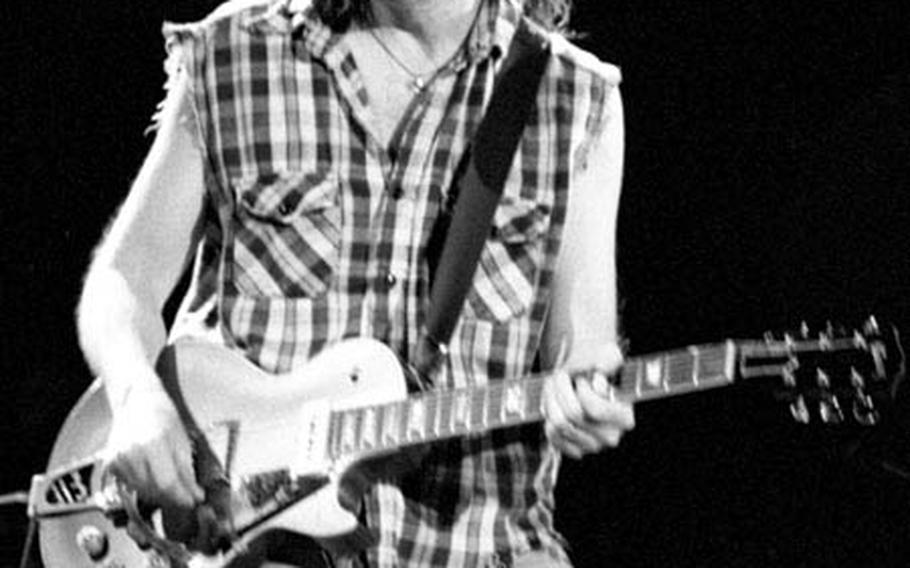 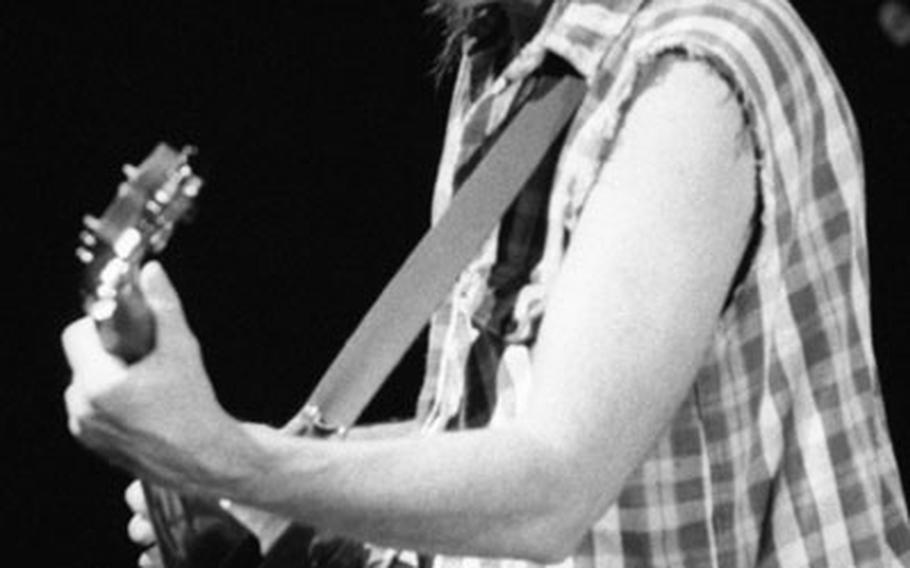 Neil Young at Frankfurt's Festhalle in May, 1987. (Anita Gosch/Stars and Stripes) 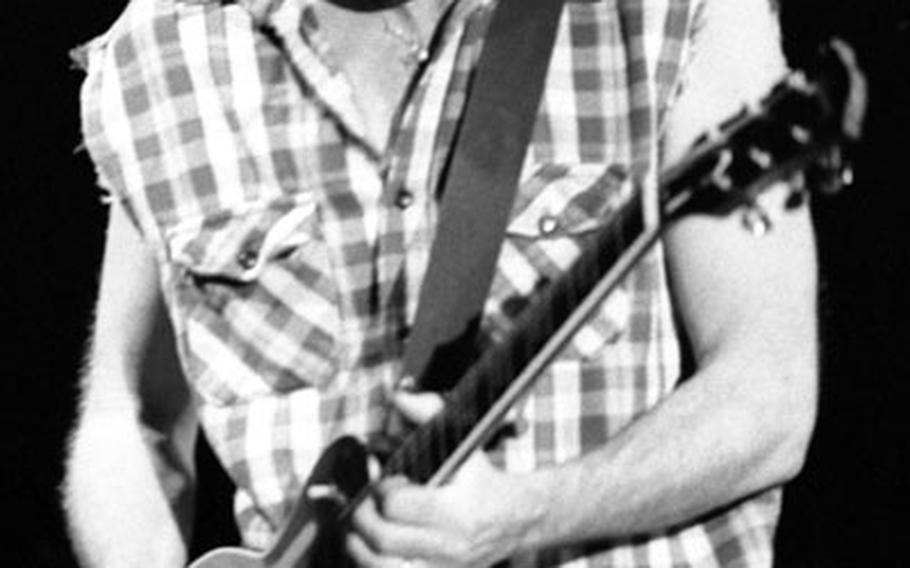 THE P.A. SYSTEM blasting tunes from the Rolling Stones' 1966 album Aftermath gave a promise of what lay ahead.

The concert Friday night in Frankfurt's Festhalle was to be a journey to a bygone era, a time when music was still music, when rock 'n' roll was simple and plain, and not convoluted by high-tech hardware, when musicians used real instruments &mdash; and knew how to play them.

Neil Young was the Pied Piper who led the crowd on this journey to the past. In just over two hours, the singer/guitarist presented a comprehensive overview of his 20-year career, emphasizing songs from the late1960s and 70s. Though only some 4,000 fans were scattered throughout the 13,000-capacity concert hall, their cheers and chants &mdash; loud, long and hard &mdash; were proof that the love of the music was still there.

Yet the concert never descended to the level of mere nostalgia. Young delivered each tune with an unbridled energy and razor-sharp precision that made even the oldest songs seem as vital today as in the past.

Young has reunited with his backing band, Crazy Horse &mdash; with rhythm guitarist Frank Sampedro, bass player Billy Talbot and drummer Ralph Molino &mdash; for the first time since 1978's "Rust Never Sleeps" tour. As in the famous trek captured on film and on vinyl, Young performed part of the show with Crazy Horse and part by himself on piano or guitar.

The concert reflected the eclecticism of Young's 27 albums, radically shifting between rockers (Cinnamon Girl and Like a Hurricane), acoustic folk-rock (Comes a Time) and piano ballads (See the Sky About to Rain).

It is this versatility that has earned Young a broad spectrum of fans.

But Friday night it was evident from the start that Young was primarily in a hard-rocking frame of mind. In the opening number, Mr. Soul, a tune written in 1967 when he was with the folk-rock band Buffalo Springfield, Young burst into the first of many scorching guitar solos that punctuated the show. Hovering near the edge of the stage, he would virtually butcher his electric guitar, grinding out the chords in near-spastic contortions, leading his band through crescendo after crescendo of exhaustive climaxes.

Young's mood during the show shifted just as radically as his musical styles. One minute he was the humble artist, thanking the crowd for being there; the next he would turn into a prima donna rock star, barking and snapping at the fans.

A particularly scathing incident happened near the beginning of the concert, one that dampened the mood for some of the fans. Before he said so much as a greeting to the crowd, Young burst into a litany of threats at a fan who threw a glow tube toward the stage and accidentally hit him on the head.

"If you're gonna start throwing things at me, I'm gonna stop playing right now. I came to play for the others, and if you don't like it, you can leave. It anyone wants to hit me in the head, he should come up here and see me about it."

One would think an old hippie like Young would be a bit more laid-back about the accident.

During the opening bars to Powderfinger, a guitar string broke and again Young exploded into a verbal assault.

"... Drop dead! Drop dead! I hate show business!" he yelled, before switching to his acoustic guitar for Needle and the Damage Done.

Later, Young regained his composure and even displayed a sense of humor.

"All right, you have a choice between Heart of Gold, a commercial I did for McDonalds, and Sugar Mountain."

Sugar Mountain won out, and Young never did perform Heart of Gold.

The guitarist was allegedly in a good mood during the show, according to a crew member queried after the concert.

The overall mood of the crowd, however, wasn't all that it could have been. With the extreme volume of the music, the concert would perhaps best be enjoyed in an outdoor venue instead of in a hall with imperfect acoustics. Particularly in the back of the Festhalle, the music often turned into a maelstrom of jarring, discordant echoes.

But Young was pleased with the sound, according to the crew member.

"The worse it is, the better he likes it," he said. "Neil is in a little world of his own up on stage, and if it sounds good to him, then it's all right."

The die-hard fans thought it was all right, too. After all, Young is a legend, they said, and he did put on one hell of a show.

"After a certain amount of time you got your money's worth, but he kept on playing," said Bad Kissingen's Kegerreis.

"It's just like the last song says," added Charles Hess, 24, also of Bad Kissingen, referring to Hey Hey My My. "'Rock 'n' roll will never die.' And neither will Neil Young."