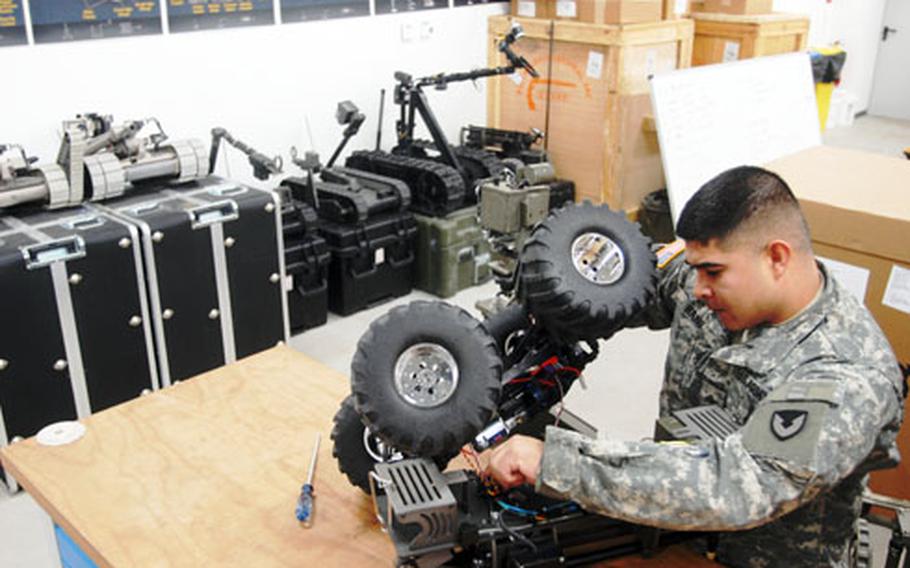 Sgt. Miguel Haro works on a robot at Hohenfels, Germany, on Monday. Most damage to the robots occurs because of operator error, Haro said. (Photo by Seth Robson/S&S)

HOHENFELS, Germany &#8212; The military robots that arrive at Sgt. Miguel Haro&#8217;s office are often in a sorry state.

Haro, whose military occupational specialty is as a heavy vehicle mechanic, has been fixing robots for three years as a member of the Robotic Systems Joint Project Office.

He spent a year in Iraq, where thousands of robots are deployed doing some of the most dangerous jobs in theater, such as defusing roadside bombs. In February, he expects to deploy again.

Robots are being used more and more by the Army, taking on dangerous duties and saving countless soldiers&#8217; lives in the process. But the machines don&#8217;t come cheap. The Talon and Pacbot robots favored by explosive ordnance disposal units run from $120,000 to $170,000 each, while a smaller Marcbot costs $18,000, Haro said.

Insurgents increasingly target the expensive machines with sniper fire and makeshift bombs. Downrange, robot repairmen pride themselves on their ability to fix a robot within four hours. If they can&#8217;t &#8212; and sometimes it&#8217;s impossible since all that&#8217;s left of some machines is the nameplate &#8212; they hand over a new robot, he said.

About 20 percent of robot damage downrange is battle damage from bombs or snipers. The rest is operator error, Haro said. In Germany, all of the robot "injuries" are caused by the soldiers learning to operate them. But it&#8217;s better that the damage happens here than in Iraq or Afghanistan, he said.

"Boys will be boys. I don&#8217;t get upset when stuff like that happens," he added philosophically.

Pushing the machines to their limits during training can be a good thing, he said.

"If I was downrange, I might need to know if my robot could go over a berm. It is better to do it here," he said.

Haro is qualified to fix damage that the bomb-disposal soldiers are not allowed to repair &#8212; such as broken arms or problems with communication between the robots and their control units, Livingston said.

Rollovers are a common cause of damage. When a robot drives into a ditch or culvert it can flip, breaking antennae and other equipment, he said.

"It just takes a lot of practice to be able to know what your robot can and can&#8217;t do and the speed you can do it at. Depth perception with the camera is also hard to get used to," he said.

Military robots are tough, and damage typically occurs when operators don&#8217;t remember the limitations of the equipment, Haro said.

The Talon&#8217;s arm, for example, which is used to manipulate bombs, can lift only 15 pounds. Some soldiers try to lift 75-pound sandbags with it during training. Experienced Talon operators using the Pacbot &#8212; a finesse robot &#8212; for the first time often overstress its arm, which is only rated for 5 pounds, he said.

Last week, two robot cameras were damaged by soldiers who jammed the machines into their cases after use, shearing through cables, Haro said.

Fortunately, most problems are easily fixed, he said.

"The beauty of this system is that we have parts for almost everything in the robot. We are also real big on cannibalizing. When I first got to Iraq, it took me eight hours to repair a robot. But when I left, I could do the same job in 20 minutes because I knew what I was looking for," he said.