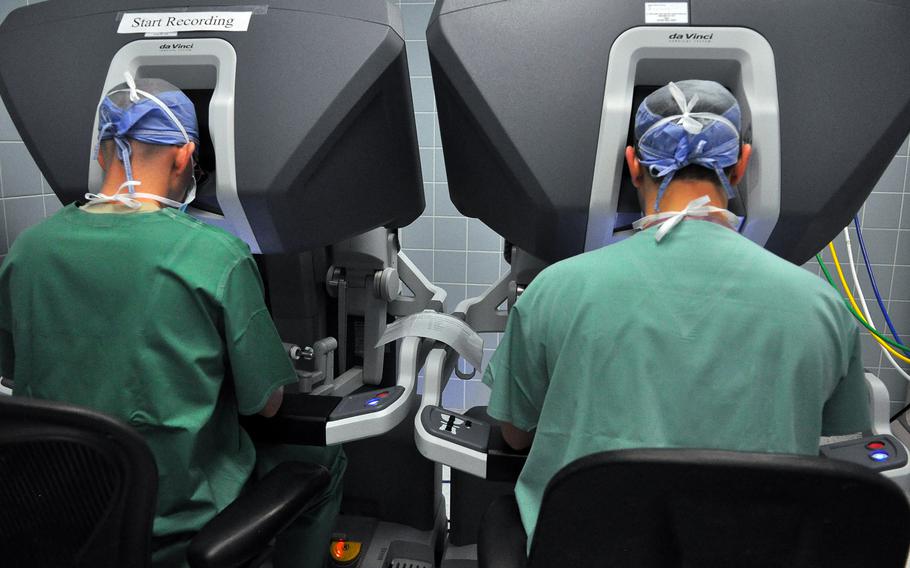 Surgeons at Landstuhl Regional Medical Center in Germany perform a prostate surgery on March 1, 2016, using the da Vinci surgical system, a robot with surgical tools that they can manipulate from a computer console. (Jennifer H. Svan/Stars and Stripes)

Surgeons at Landstuhl Regional Medical Center in Germany perform a prostate surgery on March 1, 2016, using the da Vinci surgical system, a robot with surgical tools that they can manipulate from a computer console. (Jennifer H. Svan/Stars and Stripes) 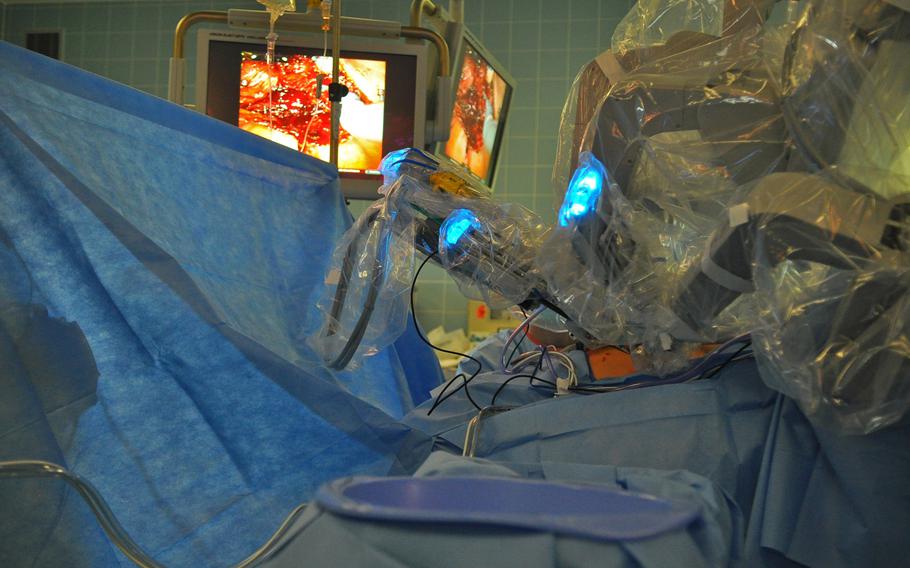 Surgical tools attached to the robotic arms of the da Vinci surgical system are inserted into a patient's abdomen for prostate surgery at Landstuhl Regional Medical Center, Germany, on March 1, 2016. Surgeons have performed more than 130 procedures using the device since the hospital acquired it last fall. (Jennifer H. Svan/Stars and Stripes) 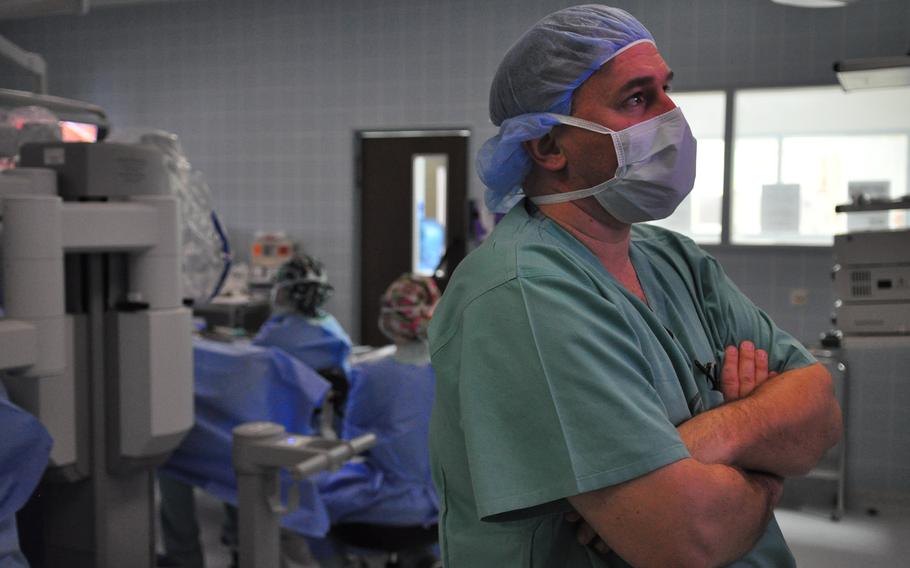 Dr. Brian Sonka, the chief of surgery at Landstuhl Regional Medical Center in Germany, stands in the operating room while doctors use the da Vinci surgical system to remove a prostate on March 1, 2016. Sonka says prostate surgery using the da Vinci can reduce patient's recovery time from weeks to days. (Jennifer H. Svan/Stars and Stripes) 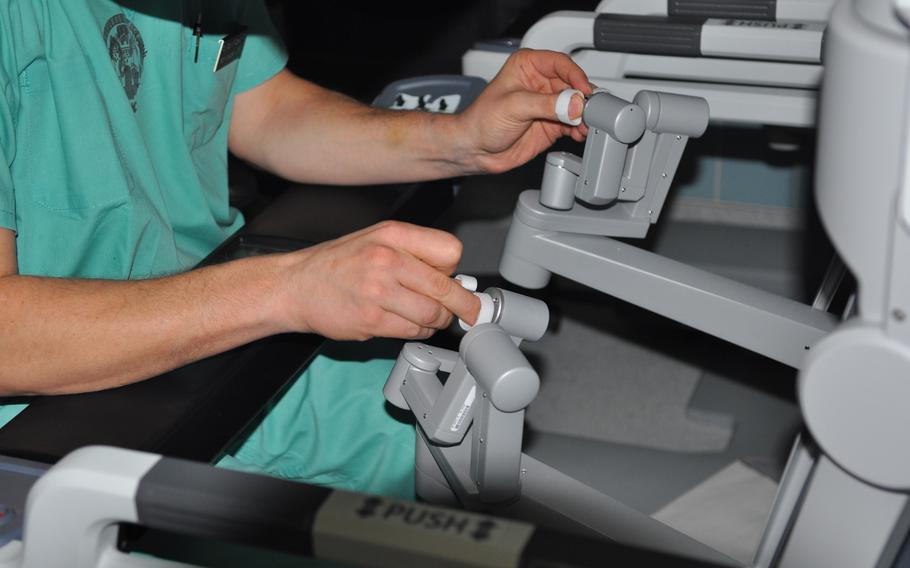 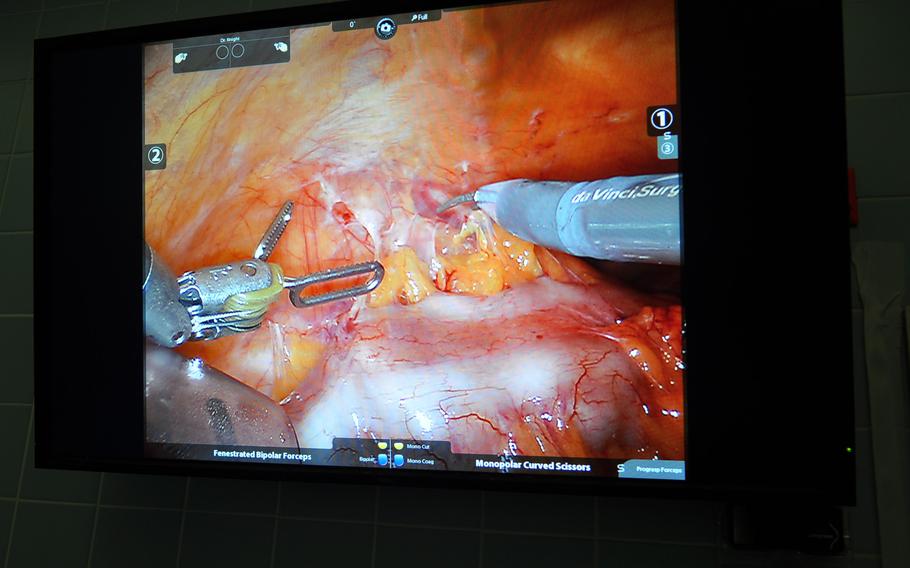 A video monitor shows the operation of the da Vinci surgical system during a procedure to remove a patient's prostate at Landstuhl Regional Medical Center, Germany, March 1, 2016. A small camera inserted inside the patient's abdomen gives surgeons manipulating the robot a magnified, high-definition, 3-D view of the target area. (Jennifer H. Svan/Stars and Stripes) 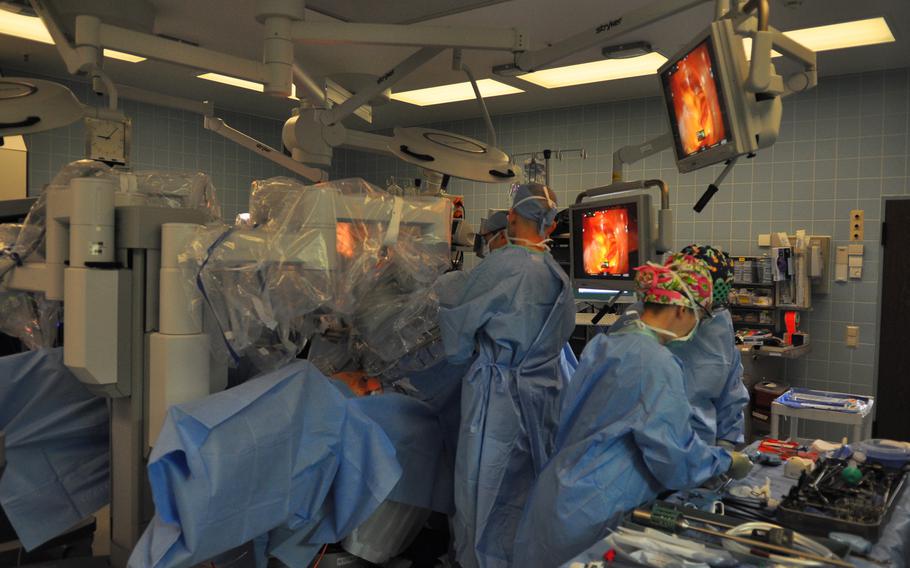 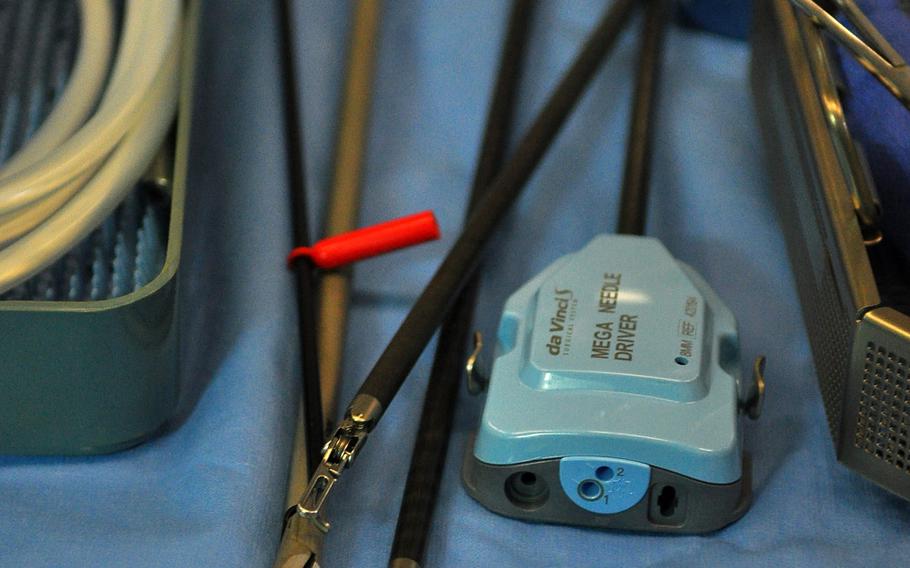 Surgical tools used during an operation with the da Vinci surgical system are laid out in an operating room at Landstuhl Regional Medical Center in Germany, March 1, 2016. (Jennifer H. Svan/Stars and Stripes)

LANDSTUHL REGIONAL MEDICAL CENTER, Germany — When Koral Guess had to have her gallbladder removed, she figured her options would be laproscopic or open surgery.

Her doctor at Landstuhl Regional Medical Center presented a third choice: robotic surgery, whereby a surgeon performs the operation by controlling a robot.

Guess opted for the robot, sold on the “lot less risk (of infection), faster recovery” pitch. Four tiny incisions later, her gallbladder was out. She was home the same day and ready to go back to work two days later.

The day after surgery, “I just felt like I had had a really intense workout the day before,” she said. “The next day, I was walking around. If it hadn’t been Saturday, I would have gone back to work. I hardly had to use any sick leave.”

Guess, 25, a U.S. civilian working in Germany at the time of her surgery last fall, was one of the first patients at LRMC to have robotic surgery.

The formal name for the hospitals’ scalpel-wielding robot is the da Vinci Surgical System, named after the 15th-century painter and polymath Leonardo da Vinci, who was known for his detailed anatomical sketches.

Civilian hospitals stateside have been using robot-assisted surgery for more than 10 years, following FDA approval of the da Vinci in 2000. More than 2,100 systems are in use in the United States.

Since acquiring the high-tech system last fall, LRMC has used the robot on more than 130 patients, for procedures ranging from prostate removal to acid reflux surgery, hospital officials said.

Unlike traditional laproscopic surgery, whose long chopstick-like instruments can be unwieldy, the da Vinci allows surgeons to have “much smaller representations of their hands doing (the surgery) with a high degree of fidelity and dexterity,” said Brian Sonka, LRMC chief of surgery and the hospital’s resident da Vinci expert.

The robot’s surgical tools are modeled after the human wrist and can rotate in full circles. “You have complete motion,” Sonka said, “so it’s like having your hands inside. That’s what makes it technically easier.”

The system consists of a surgery cart that’s placed next to the operating table with four robotic arms. Connected to the arms are ports, small metal sleeves through which surgical instruments are inserted into the patient’s belly via half-inch incisions. One of the arms holds a camera port.

The surgeon sits at a computer console several feet away, manipulating the robot with joysticks while viewing a magnified, high-definition 3-D video of the area under the knife, relayed by the surgical camera.

The robot’s tools can grasp, cut, sew and cauterize soft tissue, while the surgeon’s hands are steadied by software that filters out even the slightest hand tremor.

The technology grew out of research led by the U.S. Army and NASA, which wanted to be able to perform remote surgery on soldiers in the battlefield or astronauts in space.

More military hospitals have access to the technology, thanks to the Defense Department’s approval last year of a five-year, $430 million contract for the da Vinci systems, instruments and upgrades for the military, the Pentagon says.

Last summer, Evans Army Community Hospital in Fort Carson, Colo., introduced the public to the da Vinci during an open house, where visitors were challenged to unwrap a Starburst candy using the robot.

As the device’s use has become more widespread, it’s come under intense criticism because of recent reports critical of robotically assisted surgery.

Between January 2000 and August 2012, thousands of mishaps were reported to the FDA, The New York Times reported in 2013. In the vast majority of cases, the patient was not harmed, but among the reports were 174 injuries and 71 deaths related to da Vinci surgery, according to the Times.

And those numbers may be underreported: Researchers at the Johns Hopkins University found examples of botched operations that were not reported to the agency, after analyzing news reports and court records, the Times said.

Disadvantages of robotically assisted surgery include a steep learning curve for the more complicated procedures and a lack of sense of touch.

Sonka said similar concerns were expressed about 30 years ago with the introduction of laparoscopic surgery, a minimally invasive surgery that is routine today.

LRMC has also used the robot for colorectal surgery and nephrectomies, surgery to remove part or all of one or both kidneys.

Sonka said the robot is the best option for certain abdominal surgeries and is especially well-suited for prostate gland removal.

“This truly is the best way and really the only way, that people are doing prostate surgery in the States,” he said. “That’s the standard of care.”

Before LRMC acquired the da Vinci, patients needing prostate surgery had the option of going to Homburg, a German hospital a short drive from Landstuhl, which has been using the robot for more than five years, Sonka said. But even though recovery after robotic surgery can be much faster because of the smaller incisions, many patients still opted for open surgery at Landstuhl because they were more comfortable with the military medical system, Sonka said.