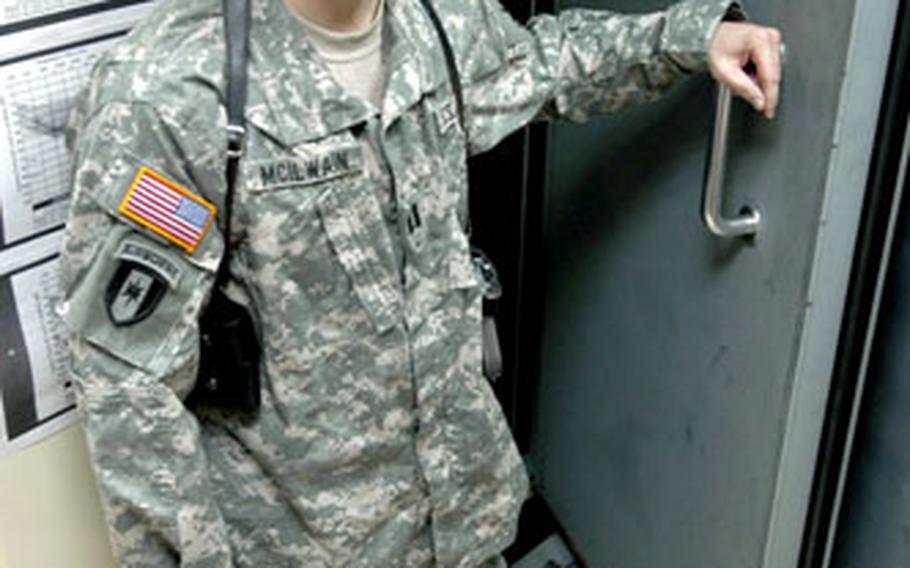 BAGHDAD &#8212; Spc. Anthony DeLeon made it through the four roadside bombs without a scratch.

The inside of his right ear, however, was not so lucky.

During his recent yearlong tour of duty north of Baghdad, the 20-year-old Texan picked up an increasingly common badge of experience from the war in Iraq: hearing damage.

While loud noise has been part of military life since muskets and cannons were part of the arsenal, Iraq is proving one of the noisiest battlegrounds yet. Roadside bombs &#8212; the signature of the country&#8217;s insurgency &#8212; regularly hit patrols, popping eardrums in their wake.

Also, more soldiers are being exposed to noise: According to a 2004 study by the Veterans of Foreign Wars, 82 percent of soldiers in Iraq engaged in combat, versus an average of 15 percent in other wars.

According to Veterans Affairs data, major hearing loss disability cases held steady through the late 1990s. The number rose markedly from nearly 40,000 cases in 2002 to about 50,000 in 2005, the latest year for which data was available.

Dycus said that in his experience, as many as 30 percent of people who are exposed to bombs suffer some form of hearing loss, temporary in most cases. All of those affected who have been seen at his clinic were returned to duty, he said.

Treatment can include temporary hearing aids and surgery.

While many soldiers shrug off their hearing loss, military medical officials say hearing loss is a serious issue.

Capt. David McIlwain, the lone American military audiologist in Iraq, operates out of a small hearing booth at the 10th Combat Support Hospital in Baghdad&#8217;s Green Zone. Once a month, he said, he sees a servicemember who has sustained significant hearing loss. He has recommended the medical discharge of two soldiers for hearing reasons.

He said he&#8217;s saddened by the impact of roadside bombs on unprotected eardrums &#8212; and by the fact that few take precautions.

Many combat-arms soldiers say they won&#8217;t wear their issued two-tone combat earplugs because they interfere with their ability to hear background noises or communicate with one another on the radio.

The consequences of that, McIlwain said, can be serious.

Some soldiers have been equipped with headsets that let them communicate with one another in vehicles, yet help protect them from loud noises such as bomb blasts.

Even soldiers who don&#8217;t regularly hear blasts are at risk, McIlwain said. Typically, he said, a career soldier &#8212; one who never deploys &#8212; will lose 6 percent of his hearing during his career.

He said servicemembers need to be attentive to the danger and take precautions.

The military should do more to educate soldiers before they deploy about using earplugs, according to an article by hearing specialists with the U.S. Army Center for Health Promotion and Preventive Medicine in the December 2005 issue of American Journal of Audiology.

The specialists also said unit commanders should be better informed about how to protect and evaluate their troops&#8217; hearing and ensure that all blast victims be referred to audiologists for evaluation.

For soldiers like DeLeon, living with his loss is a daily adjustment.

But like many soldiers, he said he&#8217;s grateful that his run-ins with roadside bombs have taken so little from him.

&#8226; If a soldier has been exposed to an explosion, the hearing loss may be temporary. The symptoms, including mild hearing loss, dizziness and ringing in the ears, can last for several days. Too many incidents such as this will result in permanent hearing loss years later.

&#8226; If the eardrum is ruptured, it will heal on its own if the ear is kept clean and dry. About 10 percent of the surface area will heal per month. Soldiers with eardrum perforations should not place anything in the ear and be very careful not to let water get into the ear until the perforation is completely healed.

&#8226; If the rupture is very large, a specialist may use surgery to repair it and then monitor the healing process. Hearing aids are not dispensed for ruptured eardrums because the prescription would change as the eardrum heals.

For more information on eardrum perforations, see www.emedicine.com, or www.earsurgery.org/tympan.html.