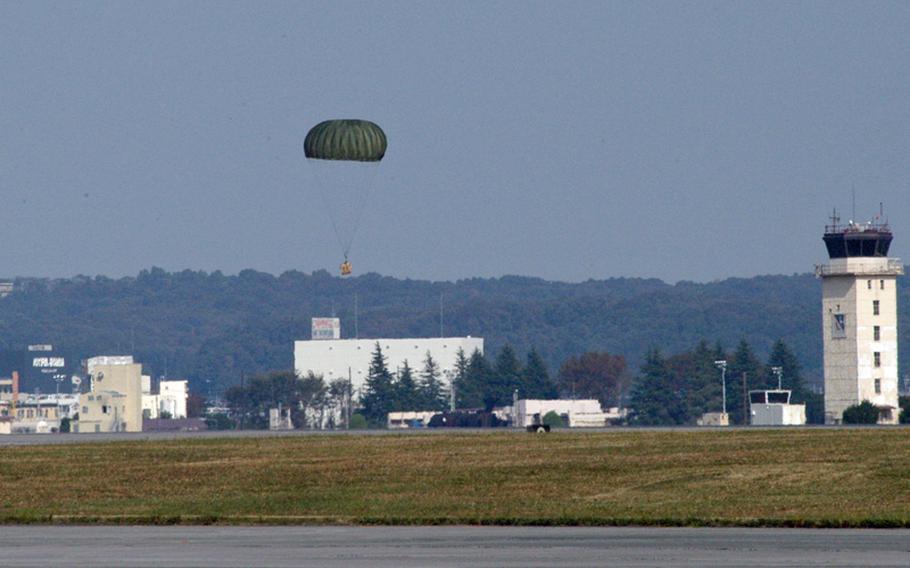 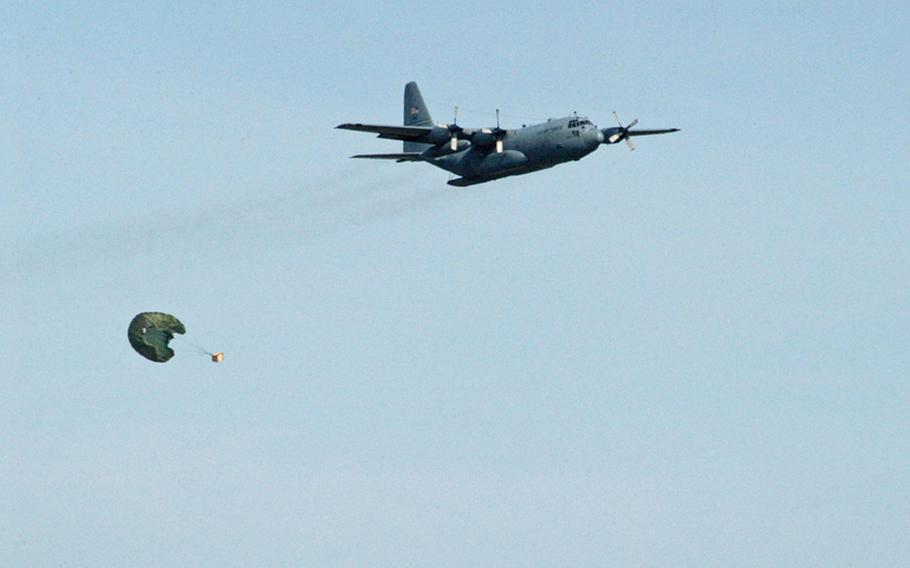 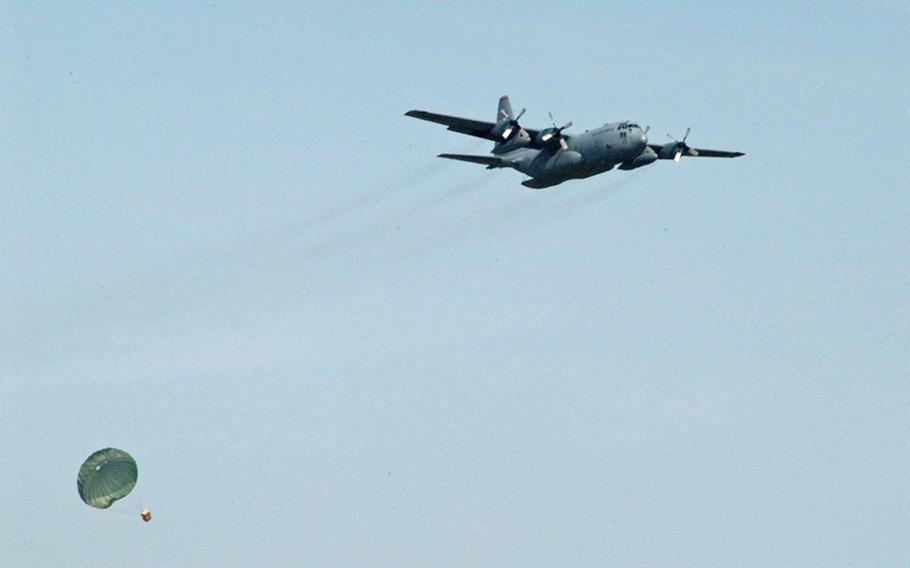 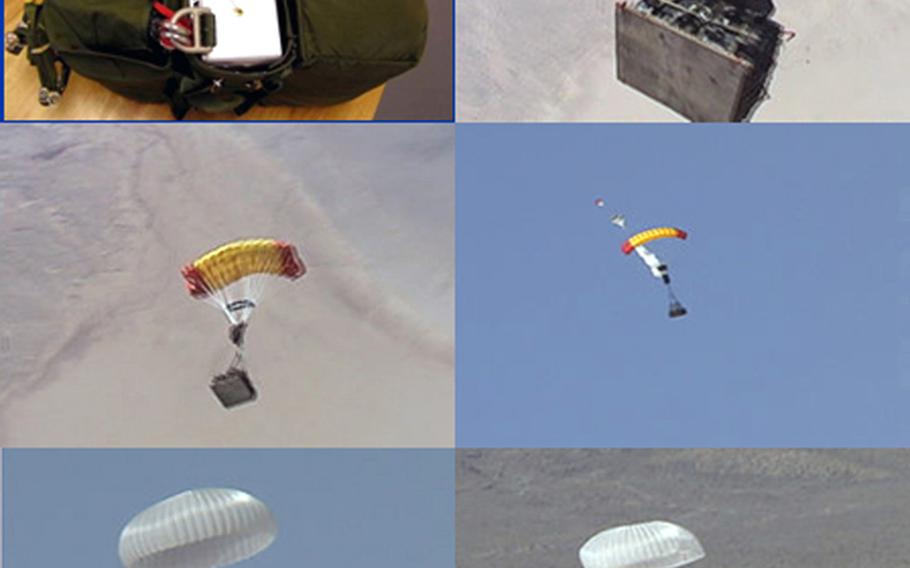 In this photo illustration, a Joint Precision Air Drop System-equipped bundle is dropped from an Air Force aircraft. The illustration shows the global positioning system-guidance system attached to the deployment of steerable and traditional parachutes en route to the bundle landing within feet of a desired location. The JPADS bundles are now being used for combat air drop missions in the war on terrorism. (Air Force Photo Illustration) YOKOTA AIR BASE, Japan &mdash; Spurred by the threat of roadside bombs, logistics commanders in Afghanistan have massively increased the use of cheap, disposable cargo parachutes and satellite-guided airdrops to supply troops on the ground.

Taliban attacks on ground convoys &mdash; which transport food, water, ammunition, fuel and equipment to far-flung U.S. bases &mdash; are a key reason why so much cargo is falling from the sky, according to Ben Rooney, an engineer at the U.S. Army Soldier Systems Center in Natick, Mass. Roadside bomb attacks hit an all-time high in Afghanistan this summer with more than 1,600 attacks reported in June.

Airdrops not only get supplies where they need to be, they also maximize troops&rsquo; safety, Rooney said.

&ldquo;Improvised explosive devices have proven to be the Achilles&rsquo; heel throughout recent years and claimed numerous lives and limbs of our warfighters,&rdquo; he said.

In the last fiscal year, 2.5 million pounds were airdropped using such parachutes, double what fell the previous year, according to the Army.

Scott Martin, who is working to refine airdrop equipment at the Soldier Systems Center, said the low-altitude airdrops use $200 parachutes, each capable of supporting 200 pounds of supplies.

&ldquo;Because the drop is so low there is less time aloft so it tends to be more accurate than traditional airdrop systems,&rdquo; Martin said. &ldquo;It is still predicated on the skill of the aircrew but you have no wind influence like you would from something dropped from several thousand feet.&rdquo;

Older airdrop systems used more expensive parachutes that soldiers were expected to recover from the battlefield and ship back to the Air Force.

The low-altitude airdrops are a good way to get supplies to small units, such as Special Forces troops, on the move, Martin said.

&ldquo;The disposable part is a huge factor,&rdquo; he said. &ldquo;It reduces the workload on soldiers immensely and it reduces their exposure time when they are retrieving the equipment.&rdquo;

However, flying low could expose aircraft to enemy fire so commanders need to take that into account, he said.

&ldquo;It&rsquo;s a trade-off,&rdquo; he said. &ldquo;You gain accuracy with some risk.&rdquo;

The Air Force also is ramping up its use of a system that links global positioning satellites to small motors that steer supply parachutes down to ground troops, Rooney said. The GPS-guided parachutes have worked so well that the Air Force plans to increase their use from 100 airdrops in the past year to 40 per month, he said.

The &ldquo;Joint Precision Air Drop System&rdquo; enables a navigator, equipped with a laptop to enter data such as the coordinates of the drop zone, wind speed and direction. The system then tells the navigator where to release the load, Rooney said.

The system&rsquo;s motors control parachutes in the same way that skydivers pull cords to guide their canopies into the drop zone, he said.

Engineers&rsquo; goal was to land satellite-guided parachutes inside a 150-meter diameter circle but the system works so well that 80 percent of loads drop in an 80-meter circle and 100 percent fall within a 100-meter circle, Rooney said.

The satellite-guided system allows cargo aircraft to fly as high as 25,000 feet where wind would normally be a major factor. The altitude puts them beyond the range of Afghan insurgents who frequently take pot shots at low flying planes, he said.

It also allows supplies to be &ldquo;flown&rdquo; to a drop zone from a release point up to 16 miles away, he said.

The systems, which cost $20,000 each, carry up to 2,200 pounds of cargo. If troops are in a hurry they only need to unclip an 8-pound avionics unit to have recovered half the system&rsquo;s value, Rooney said. &ldquo;This is also a game changer for users (such as Special Operations personnel) who jump in with their supplies,&rdquo; he said. &ldquo;They can now be confident that their supplies we will be at the intended point on the ground when they land rather than having to hunt them down.&rdquo;

Capt. Jeremy Hague, 28, of Pittsburgh, a navigator with the 36th Airlift Squadron out of Yokota Air Base, Japan, said a big advantage of the GPS-guided parachute is its ability to hit a target in poor visibility.

&ldquo;We can drop it above the clouds and it will steer itself to the impact point,&rdquo; he said.

However, Hague, who&rsquo;s recently deployed to Iraq and Afghanistan and practiced GPS-guided drops in the skies over Mount Fuji, said the low-altitude drops are more exciting.

&ldquo;It&rsquo;s exciting because you are down there looking at where you are dropping it whereas with the Joint Precision Air Drop System you just drive to a point in space and drop it,&rdquo; Hague said.