Road to safety starts with a call for a free ride 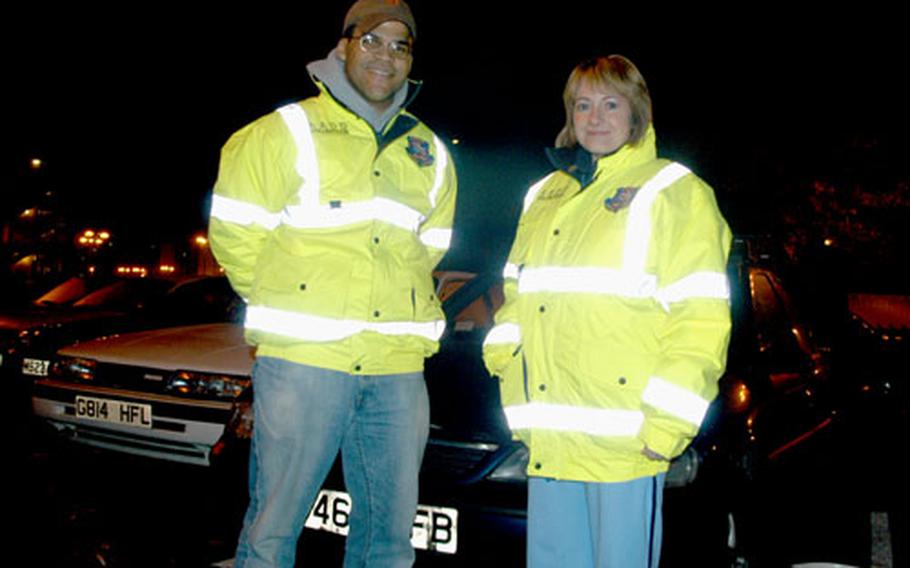 Capt. Tony Phillips and Master Sgt. Angela Smith kept airmen safe last Saturday night. The two were participating in a program that provides safe transport for airmen who are too drunk to drive. The program has shuttled nearly 700 airmen in the past year. (Bryan Mitchell / S&S)

The senior noncommissioned officer rallied co-workers from the 48th Judge Advocate General&#8217;s Office as volunteers for a night of shuttling less-than-sober airmen home with the Airmen Against Drunk Driving program.

What they are hoping to avoid is more vehicle-related deaths among servicemembers stationed in the U.K. While it has not been determined that alcohol was a factor in two recent deaths, the fact that the U.S. military community lost two airmen to traffic accidents has been a motivation behind the anti-drunken driving effort.

Both men were killed in head-on collisions while driving after midnight on weekend nights. The Suffolk Constabulary has not completed its investigations of either crash.

Still, their fatal accidents loom over the U.S. Air Force community in England. Airmen who deploy around the globe are human, prone to moments of poor decisions that can lead to death.

Capt. Tony Phillips, Smith&#8217;s partner behind the wheel for their eight-hour shift Saturday night into Sunday morning, said Biram&#8217;s death in particular motivated him to offer his time.

Smith and Phillips were the latest participants in a program that has provided safe transport for nearly 700 airmen in the past year.

The concept couldn&#8217;t be more straightforward: A team of dispatchers answers a cell phone for calls from too-drunk-to-drive airmen, who are promptly shuttled from the local haunts &#8212; Newmarket, Mildenhall, Brandon &#8212; back to their homes. And everything&#8217;s anonymous.

Some weekends, entire squadrons deploy volunteers to man the program while other weekends see individual airmen volunteer to form an ad-hoc life-saving mechanism.

Last Saturday, the legal team of Smith and Phillips had to reel in an over-the-legal-limit participant before 11 p.m.