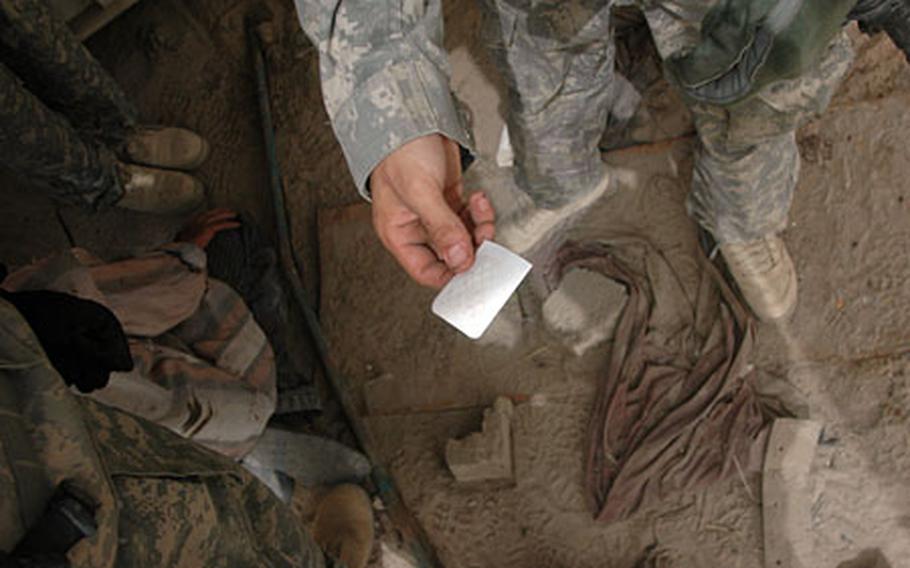 Soldiers from a roadside-bomb clearance team inspect a piece of explosives residue testing paper after it was rubbed on an Iraqi suspect&#39;s hands and sprayed for evidence. It came up negative. (Les Neuhaus / S&S)

Soldiers from a roadside-bomb clearance team inspect a piece of explosives residue testing paper after it was rubbed on an Iraqi suspect&#39;s hands and sprayed for evidence. It came up negative. (Les Neuhaus / S&S) A soldier from a 1st Battalion, 8th Cavalry Regiment bomb-clearing team conducts a test for explosives residue on the hand of a suspect after a roadside bomb went off Saturday morning. The test indicated a negative response for explosives. (Les Neuhaus / S&S) A soldier from the 1st Battalion, 8th Cavalry Regiment of the 1st Cavalry Division’s 2nd Brigade stands guard over two young Iraqi suspects who happened to be near where a roadside bomb was detonated Saturday. They were let go after explosives residue tests administered turned up negative. (Les Neuhaus / S&S) 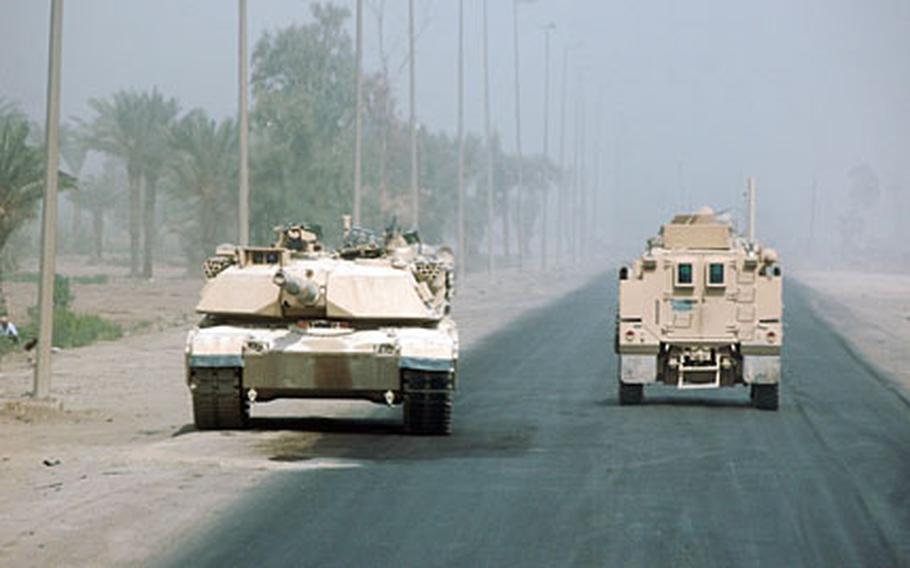 An Abrams tank and a heavily armored route-clearance vehicle pass each other on Route Pluto, a name given to a major highway, in eastern Baghdad. Five U.S. troops died on Pluto and Route Predator, which intersects with Pluto. Soldiers from the 1st Battalion, 8th Cavalry Regiment of the 1st Cavalry Division’s 2nd Brigade patrolled the area for roadside bombs on Saturday. (Les Neuhaus / S&S) An U.S. forces interpreter speaks with several Iraqi suspects after a roadside bomb detonated near their business and workplace on what the U.S. refers to Route Pluto. No one was injured in the blast. Efforts have been stepped by the military to rid the major supply artery of explosives after two different incidents led to the deaths of five U.S. troops on Tuesday and Wednesday. (Les Neuhaus / S&S)

BAGHDAD &#8212; Coalition forces have stepped up efforts to reduce the threat of roadside bombs on two major supply arteries in eastern Baghdad where surprise attacks killed five U.S. troops in the past week.

But it is an uphill battle, said several troops responsible for clearing the routes on a daily basis.

&#8220;If anything, it&#8217;s only gotten worse since we&#8217;ve been here,&#8221; Staff Sgt. Robert Schuelke, of Milwaukee, said as his platoon prepared for another roadside-bomb-clearing mission Saturday morning.

Schuelke is a member of the 1st Battalion, 8th Cavalry Regiment, which belongs to the 1st Cavalry Division&#8217;s 2nd Brigade. The men in his unit are currently in eastern Baghdad with the 2nd Brigade of the 2nd Infantry Division.

As the 26-year-old soldier made the comment, more than a dozen soldiers &#8212; senior noncommissioned officers and junior enlisted alike &#8212; nodded in agreement as they stood by listening.

Troops in two battalions stationed at Forward Operating Base Rustamiyah are well aware how dangerous routes Pluto and Predator are. Three men from the 2nd Battalion, 16th Infantry Regiment &#8212; a part of the 1st Infantry Division&#8217;s 4th Brigade &#8212; and two men from the 2nd Battalion, 69th Armored Regiment &#8212; a part of the 3rd Infantry Division&#8217;s 3rd Brigade &#8212; died on Tuesday and Wednesday, respectively, from attacks along these roads. Three other men were injured, two from the 2-16 so severely that their lives will be altered forever.

The deadliest bombs used against U.S. forces are explosively formed penetrators, and there doesn&#8217;t seem to be much that can stop them, say several troops from the 1-8. The unit has lost several men as well since being deployed to Iraq late last year.

Again, but with more emphasis, everyone around him agreed, including members of the Army&#8217;s elite explosive ordnance disposal teams, who accompany the route-clearance teams every time they go out on a mission.

Route Pluto straddles the east Baghdad neighborhoods of New Baghdad and Karradah, running northwest into the heart of the capital.

It is a major highway divided lengthwise by a canal composed largely of sewage. Between the highway and canal on either side runs a patchwork of agricultural plots used by locals for subsistence-level farming.

Route Predator is a chokingly busy road with much of its traffic crossing over Pluto or dumping into or off it.

The route-clearance teams have difficulty determining who among the farmers, if any, know who plants the bombs that kill their men.

During Saturday&#8217;s patrol, a blast went off on Pluto out of earshot of the troops.

Once word came over the radio, the men were dispatched to investigate.

Sure enough, a bomb of some type had gone off to the left of the southeast-bound lane median. Troops from several vehicles got out to question suspects.

The suspects were Iraqi youths in their early 20s who work at a sand-blasting stall positioned off the shoulder of the road. A couple of their friends were there also. Even though there were other shanty business stalls around theirs, the youths were the only ones targeted by the 1-8 troops.

No one else was questioned, except for a person operating a small stand a few feet away.

&#8220;We&#8217;re trying to deal with the immediate problem (of roadside bombs),&#8221; Barnecut said just prior to the patrol, referring to how infrequently his men actually dismount to conduct investigations or pursue perpetrators.

The troops questioned the eight young Iraqis and searched their pockets. Two were found with what one sergeant called &#8220;expensive&#8221; cell phones, which he said made them immediate suspects.

Because of that, the two were tested no less than 10 times between them for explosives residue via a testing kit. Dirt from their hands appeared to smudge the patches used to wipe down suspects&#8217; hands and fingers, so when the chemical agent was sprayed onto the patches, troops were confused about the color coding for TNT.

The troops then tested a third suspect to ensure they weren&#8217;t missing anything.

The third man, Aqeel Hussein Nasser, was crying and said he was scared.

In the end, none of the young men were arrested.

But with bombs continuing to claim American lives, soldiers in the area are taking no chances with anyone.

As the friend of a soldier who died Tuesday told Stars and Stripes: &#8220;I want to get out there and get the guys who killed him.&#8221;