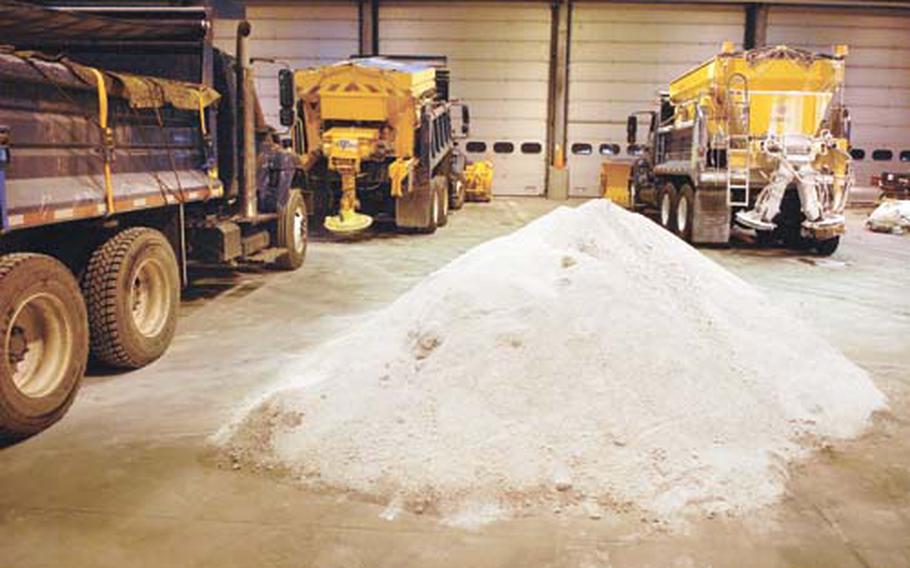 Ten metric tons, or roughly two truckloads, of salt is all Ramstein Air Base has left after the recent barrage of snow and ice. (Ben Bloker / S&S)

Members of the Kaiserslautern military community found driving rather difficult Tuesday morning, as ice blanketed the local roads. At one point during the day, the bases were shut down and all vehicle traffic was stopped.

The situation could get worse if another ice storm were to hit any time soon because Ramstein Air Base &#8212; along with many other U.S. military installations across Germany &#8212; is running out of road salt.

The base has only 10 tons of salt left. Base workers normally use 22 tons of salt on base roads during a snowstorm, said Air Force Tech. Sgt. Gary LaFrance from the 786th Civil Engineering Squadron.

The situation has gotten so bad at Ramstein that contracting officials placed an ad on the Federal Business Opportunities Web site, stating they are desperately"seeking anyone to fill an order for 120 tons of salt.

U.S. installations in Germany normally get road salt from the surrounding communities, but even the Germans are running out of salt, said Aaron Schoenfeld, a Ramstein spokesman. German officials are looking to neighboring countries for help, he said.

Until more salt can be found, Ramstein officials will ration their remaining supply by only salting critical areas such as intersections, traffic circles and 300 feet of roadway leading to and from these points, Schoenfeld said. However they are &#8220;clearing the roadways one way or another.&#8221;

Residents of other installations also might notice an increase in use of sand or gravel on roads to compensate for the nationwide shortage. Places such as U.S. Army Garrison Stuttgart already have an increased amount of gravel on the roads.

Several parts of Germany are projected to get between four and nine inches of snow over the next three days, according to the Air Force&#8217;s 21st Operational Weather Squadron.