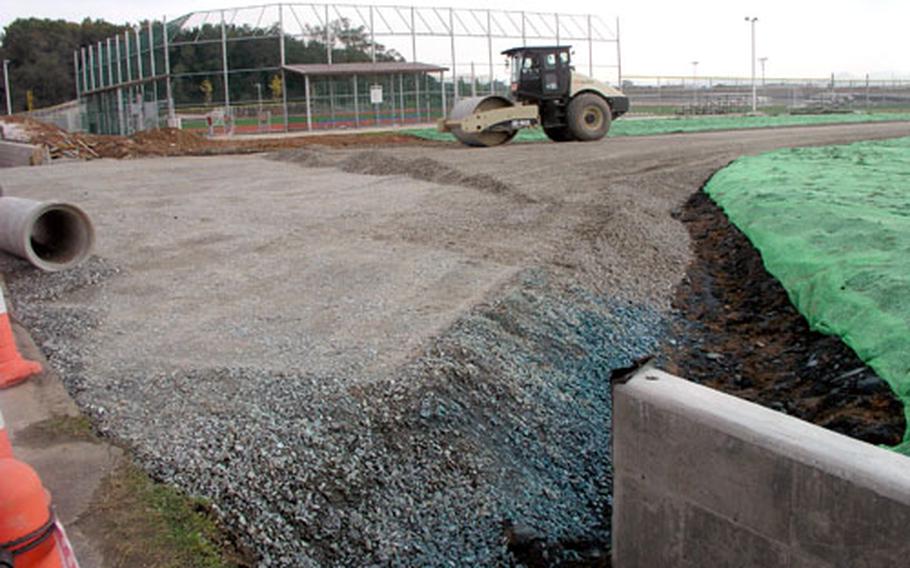 At Camp Humphreys in South Korea, work goes forward just inside the main gate on a bypass road that will route motorists away from construction near Beacon Hill toward the post’s downtown area. It’s one of seven road projects due for completion – weather permitting – by mid-December, aimed at affording motorists a safer, smoother drive. (Franklin Fisher / S&S)

PYEONGTAEK, South Korea &#8212; Ever tried driving to work over bumpy roads while sipping your morning coffee?

Chances are, if you were driving on some of the old, traffic-worn roads at sprawling Camp Humphreys, you had a spill or two on the way.

The public works people at Humphreys are aiming to give you both a smooth ride and a break on your dry cleaning bill by Dec. 15, weather permitting.

There are seven road projects under way that will make for safer travel over smooth, new surfaces.

&#8220;They&#8217;ll have some nice, new, safe roads to drive on instead of the old, potholed, bumpy,&#8221; roads, some of which have been cut for the laying of utility lines, said Rodney Ring, a construction inspector with the U.S. Army Garrison Humphreys&#8217; public works directorate.

Workers are laying a bypass just beyond the main gate. It&#8217;ll be about 1,500 feet long and will route traffic away from the Beacon Hill area, where new perimeter wall construction is in progress.

Motorists heading for the downtown area of post currently make a left turn after entering the main gate and follow Freedom Road, which takes them past Beacon Hill on their left and the new multipurpose athletic fields on their right.

Once the bypass is in service, motorists heading downtown won&#8217;t turn left; they&#8217;ll proceed straight beyond the main gate and avoid the Beacon Hill area altogether, as the bypass takes them onto Freedom Road.

&#8220;This will detour traffic away from construction in that area, thereby not causing them delays or inconveniences,&#8221; Ring said of the workers.

In the future, the road will become part of a planned new main gate project, officials said.

In the western part of the post, crews are working on a flood-prone, 850-foot stretch of Perimeter Road that runs between MP Hill and the 94th Military Police Battalion motor pool area, said Mark Cunningham, who also is a public works department construction inspector.

That should spare the community inconvenience, especially during the summer monsoon season, he said.

Five other projects aim to repair parts of roads on the post.