Buy Photo
Actress Rita Hayworth and her husband, producer James Hill, arrive in Frankfurt from the U.S. on their way to Berlin in June, 1959. (Red Grandy/Stars and Stripes)

Buy Photo
Actress Rita Hayworth and her husband, producer James Hill, arrive in Frankfurt from the U.S. on their way to Berlin in June, 1959. (Red Grandy/Stars and Stripes) 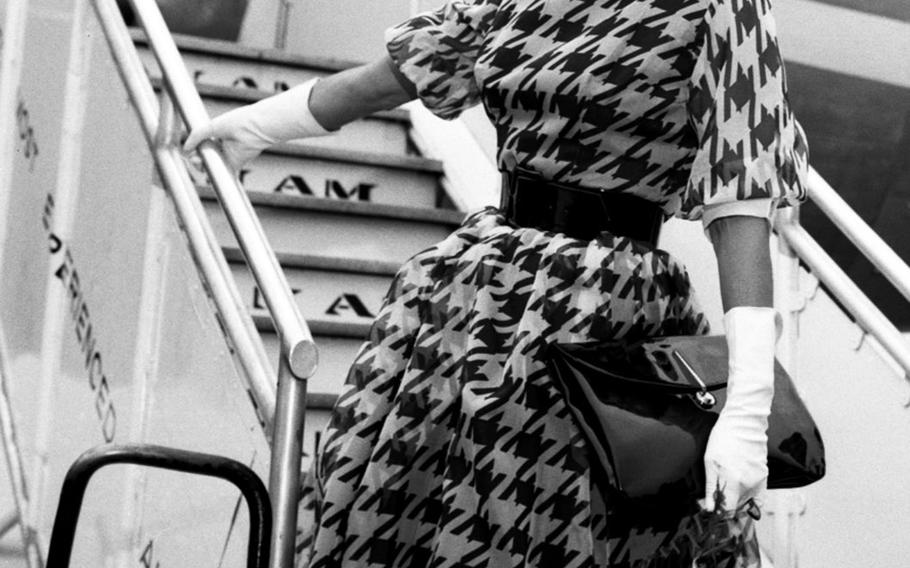 FRANKFURT — Film stars Esther Williams and Rita Hayworth arrived at Frankfurt Airport for brief stopovers Friday before continuing to Berlin, where they will attend the International Film Festival.

Miss Williams, accompanied by her publicity agent, Mel Pumpery, arrived by auto from Wiesbaden. She had traveled there after visiting friends in Naples, where she "enjoyed the sunshine and the water was warm."

Her plane to Berlin left only minutes before Miss Hayworth arrived from London, accompanied by her husband, James Hill, of the Hollywood producing team Hecht-Hill-Lancaster.

In Berlin, the film personalities will join hundreds of other international celebrities representing their nations' film industries.

Miss Williams said she would leave Berlin Monday to join business associates for talks in New York before joining her three children at Cody, Wyo., for a July 4 celebration.

"They are staying with Grandma right now," she smiled.

The movie mermaid was divorced from Ben Gage, her second husband and business partner, last April after 13 years of marriage.

She said she will read over a script when she returns from Berlin, and will decide whether to go ahead with plans for starring in five TV color spectacles.

Miss Hayworth had little to say to a gathering of newsmen and photographers. Hill said, however, it was her first trip to Germany since the late 1940s when she entertained occupation troops here.

Her latest movie, "The Unforgiven," will be released soon, Hill said. It costars Burt Lancaster, one of Hill's partners in the producing firm.