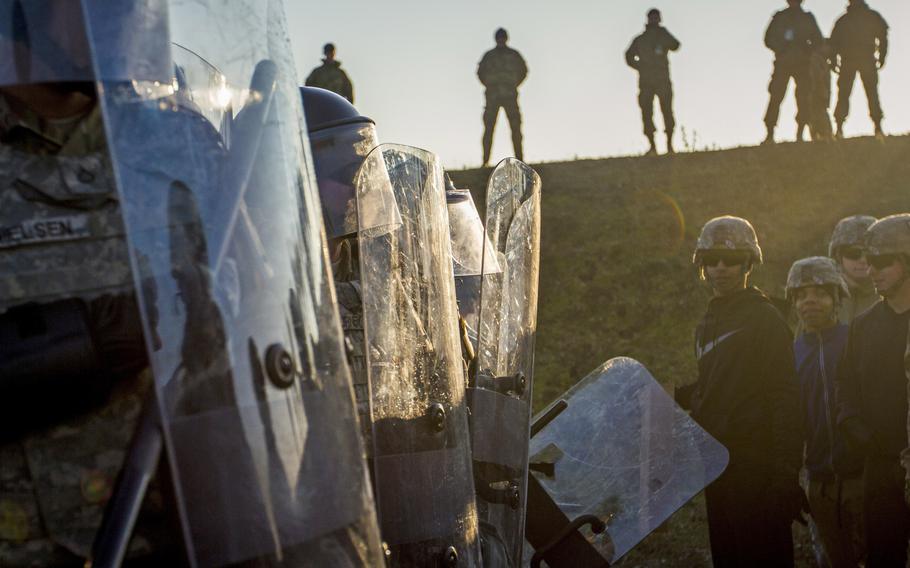 Ethnic tensions are rising in Kosovo, setting the stage for an early test of U.S.-Russian relations under President Donald Trump in a Balkan country where U.S. troops keep the peace decades after a NATO air campaign ended Serb rule over the Albanian population.

A 78-day U.S.-led bombing campaign in 1999 forced Serbia to give up control of Kosovo, which Serbs consider their historic homeland, after months of reprisal killings and forced dislocations by armed Serbs and ethnic Albanian rebels.

The fighting left Kosovo, now recognized as an independent country by the U.S. and more than 110 nations, divided between Albanians and Serbs under U.S. and NATO protection.

But Serbia and its Russian allies have never recognized Kosovo’s independence, and in recent months the Serbian nationalist government of President Tomislav Nikolic has stepped up provocations.

The goal appears to be to fire up the government’s hard-line supporters and test the new U.S. administration’s willingness to change Kosovo policy.

As part of those provocations, Serbia last month opened a new rail line to the Serb part of the Kosovo city of Mitrovica, featuring a train decorated with the slogan “Kosovo is Serbia.”

Kosovo’s special police units blocked the rail line with armored vehicles, bringing Serbs and Albanians to the “brink of conflict,” according to Nikolic.

Nikolic has argued that Serbia should send armed forces into northern Kosovo to protect the Serb minority — a call firmly rejected by the Albanian leadership in Kosovo’s capital, Pristina.

Kosovo’s President Hashim Thaci claimed in a recent interview that Serbia was infiltrating armed individuals into northern Kosovo in a repeat of what Russia did in Crimea and eastern Ukraine.

So far there is no sign that Trump plans to change American policy in Kosovo or elsewhere in the former Yugoslavia — now a cluster of seven independent countries including Serbia and Kosovo.

During his recent confirmation hearings, Defense Secretary Jim Mattis said the 678 U.S. troops should remain in Kosovo as part of the 4,600-member NATO peacekeeping force until the “current security situation” changes.

Repeating a long-standing U.S. position, Mattis said issues between Kosovo and Serbia, including Kosovo’s desire for a national army, should be addressed in future talks with the European Union about EU membership for each country.

Mattis’ carefully crafted response was spun by Serb nationalists in Belgrade as a sign that the Trump administration was endorsing creation of a Kosovo army, an interpretation criticized even by independent political analysts in Belgrade.

Still, some in the Serbian leadership believe Trump will alter U.S. policy to favor the Serbs in the Kosovo dispute, bringing Washington’s position closer to the Russian stand.

“Nikolic, who makes no secret of his pro-Russian sentiment, seems to share the belief that the new president will reverse American policy toward Kosovo,” Belgrade political commentator Zoran Kusovac said. “This wishful thinking goes as far as to claim that United States under Trump would allow Serbian army to deploy its own forces to Kosovo.”

Regardless of whether such ideas are fanciful, they could prompt the Serbian leadership to miscalculate, triggering a crisis in a forgotten corner of the Balkans.

The Kosovo crisis is just one of several shaking the countries of former Yugoslav federation.

Belgrade has announced that it will receive a squadron of second-hand MiG-29 fighters as a gift from its “friends and allies” Russia and Belarus. NATO member Croatia, with which Serbia fought a war in the 1990s, announced that it too would procure second-hand jets, probably F-16s, and Blackhawk helicopters from the United States.

In the last week both countries also talked about reviving military conscription, abolished in the postwar reduction of military assets.

Ivo Banac, a Croatian analyst and history professor at Yale University, said he doubts U.S. policy in the Balkans will change in the near term. But he added that “some in the Balkans, but also in Russia” believe Trump’s hopes of developing a good relationship with Moscow will lead to “a new division of spheres of influence” in Europe.

“We have all had a tense summer and fall in the region ... because a lot of underlying problems have not been resolved,” said Goran Svilanovic, head of the intergovernmental Regional Cooperation Council, a grouping of nations and international organizations helping facilitate eventual integration into the EU.