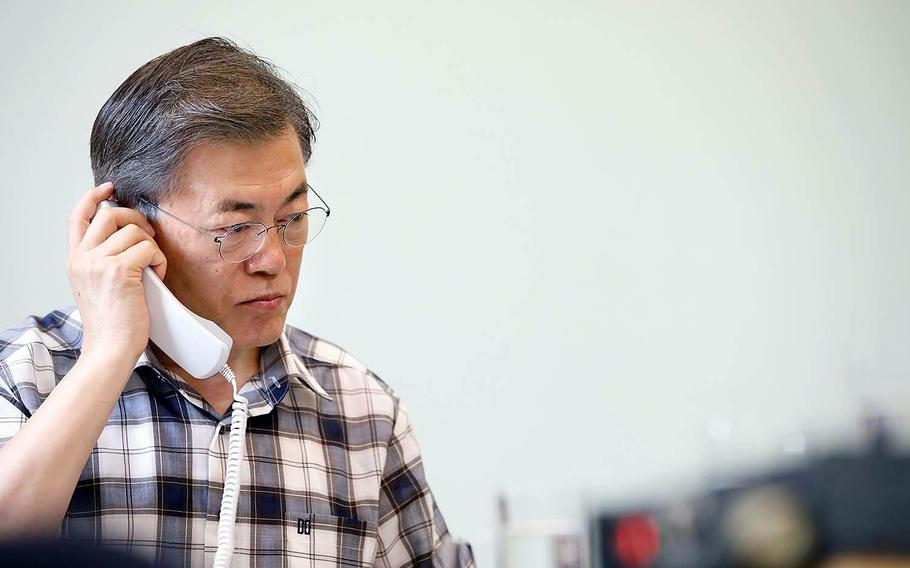 New South Korean President Moon Jae-in has found himself balancing his desire for dialogue with North Korea with a need for punishing sanctions and strengthening defenses. (Courtesy of Chong Wa Dae)

North Korea, however, has rejected or simply ignored all overtures by the liberal leader’s administration to date. Instead Moon has found himself balancing his desire for dialogue with a need for punishing sanctions and strengthening defenses as the communist state has test-fired a steady drumbeat of missiles.

Tensions escalated further this week with a new round of saber rattling by the North, which said it was “seriously examining” a plan to fire missiles into waters near Guam, and President Donald Trump, who promised threats against the United States will be met with “fire and fury.”

The Foreign Ministry appealed again for the communist state to accept its recent proposal for talks aimed at easing border tensions and resuming reunions of families that were left divided on either half of the peninsula following the 1950-53 Korean War.

“The North’s recent threatening words have gone too far,” ministry spokesman Cho June-hyuck said Thursday during a press briefing. “The North should make the right choice and take the road toward denuclearization.”

But the heated rhetoric and Pyongyang’s rapid march toward developing a nuclear-tipped weapon that could reach the U.S. mainland have sharply diminished the chances for a resumption of even small-scale talks in the near future.

Moon, a 64-year-old former human-rights lawyer and son of North Korean refugees, is determined that the South take the lead in dealing with its longtime rival, although he has been forced to harden his rhetoric as well in the face of Pyongyang’s defiance.

In a phone call with Trump earlier this week, Moon “agreed their countries must put maximum pressure and sanctions on North Korea,” according to the presidential office.

But even then he reiterated hopes that Pyongyang would accept the proposals for inter-Korean talks, which would be the first at the governmental level since 2015.

His new government also has approved civilian outreach, including the delivery of humanitarian aid and exchanges. North Korea has so far rebuffed those efforts as well.

“He’s putting out the olive branches and the North Koreans are swatting them away,” said Robert Kelly, an associate professor in international relations at South Korea’s Pusan National University.

That’s a disappointment for those who hoped Moon’s presidency would usher in a new Sunshine policy. The term refers to the friendly policies that led to summits between the late North Korean leader Kim Jong Il and previous liberal South Korean presidents Roh Moo-hyun and Kim Dae-jung, who won a Nobel Peace Prize for his efforts.

Kelly noted that North Korea in the past has at least participated in talks using threats of military action to gain aid and concessions or as a stalling tactic, but it’s not clear what Kim Jong Un’s strategy is.

The 33-year-old leader, who took over after his father Kim Jong Il died of a heart attack in 2011, has drastically increased the pace of the country’s weapons program.

“They’re on this route to confrontation,” Kelly said. “I don’t understand why he would do that when there’s a liberal in the Blue House.”

Secretary of State Rex Tillerson has left the door open for talks, but North Korea has insisted its nuclear weapons program isn’t up for negotiation.

Trump, meanwhile, has bounced between suggesting he would be “honored” to meet Kim under the right conditions to warning that military action is on the table despite concerns that would provoke a new conflict with North Korea that would be catastrophic for all sides.

“North Korea best not make any more threats to the United States. They will be met with fire and fury like the world has never seen,” Trump said Tuesday after reports that U.S. intelligence analysts believe Pyongyang has miniaturized a nuclear warhead in what would be a major advance if confirmed.

Six-party talks including the U.S., China, Russia, Japan and the two Koreas aimed at dismantling the North’s nuclear program — then in its beginning stages — were held intermittently from 2003 until they broke down in 2009.

Beijing, which is the North’s economic lifeline and ally, and others have pressed for a resumption. But Washington and Seoul under Moon’s predecessor, Park Geun-hye, said that would be possible only if Pyongyang abandons its nuclear ambitions.

North Korea mentioned its anger over the most recent and toughest round of sanctions, which were approved over the weekend, in its threat to target Guam. It also wants an end to annual joint U.S.-South Korean war games.

Many observers believe North Korea will agree to resume talks with major powers only after it has a proven nuclear arsenal to use as leverage and as a guarantee of the regime’s survival, which is believed to be its ultimate goal.

The Kim family dynasty has ruled the country since its formation in 1948.

Moon Keun-sik, an analyst at the Korea Defense and Security Forum, said North Korea wants to be recognized as a nuclear power.

Moderates who were interested in engaging with the South have been purged by Kim’s regime, which wants to keep Seoul out of the equation, he said.

“If we keep asking them to have talks with us, we’re going to be ignored by them and put to shame,” he said. “We’ll have to strengthen cooperation with Washington and reinforce our own defense capabilities and missiles.”