Rising out from the ashes 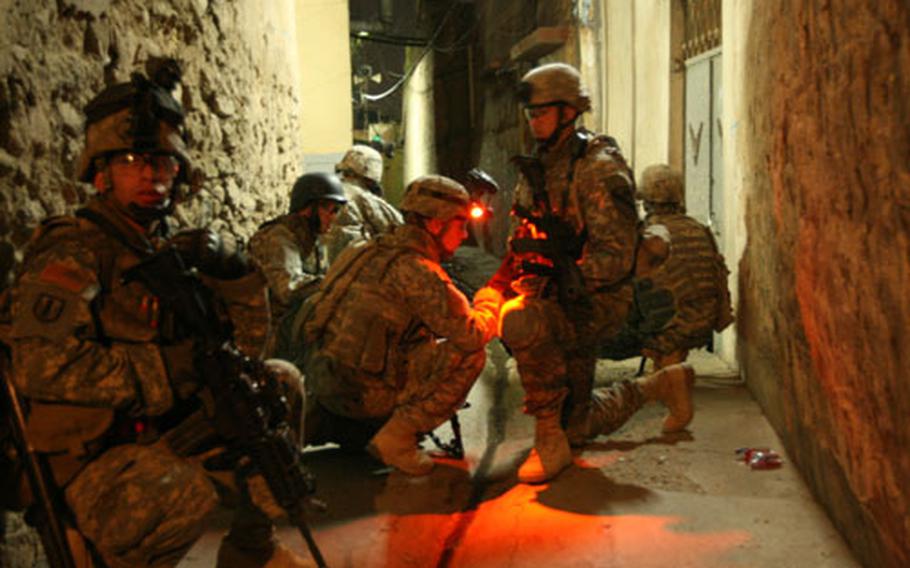 U.S. troops with Company B, 2nd Battalion, 7th U.S. Cavalry Regiment take up positions outside a house during a raid that targeted a suspected insurgent cell leader in Mosul in northern Iraq. (Drew Brown / S&S)

U.S. troops with Company B, 2nd Battalion, 7th U.S. Cavalry Regiment take up positions outside a house during a raid that targeted a suspected insurgent cell leader in Mosul in northern Iraq. (Drew Brown / S&S) 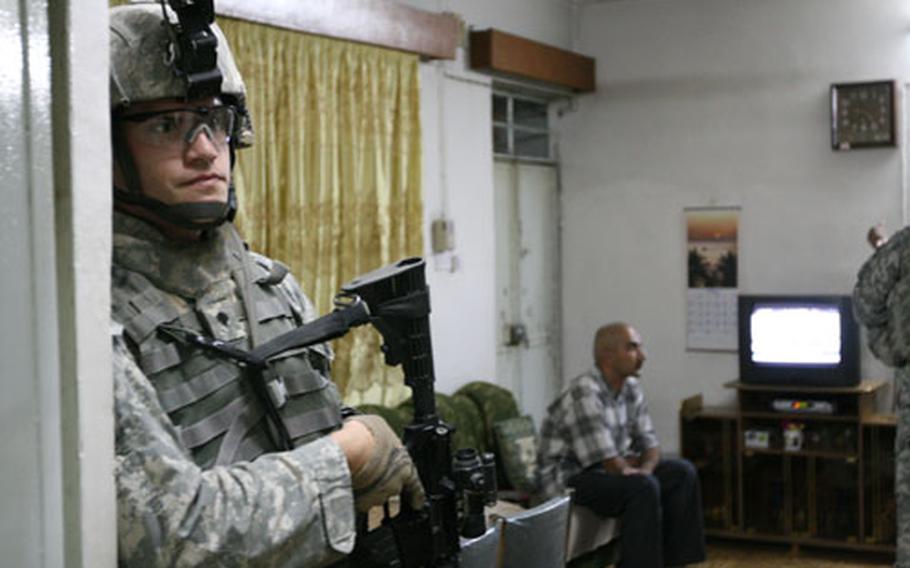 Spc. Gabriel Pimentel, 21, of Ontario, Oregon, stands guard next to a door as 1st Lt. Allen Trujillo and an Iraqi interpreter talk to local residents during a visit by Company C, 2nd Battalion, 7th Cavalry to a Mosul neighborhood. (Drew Brown / S&S) 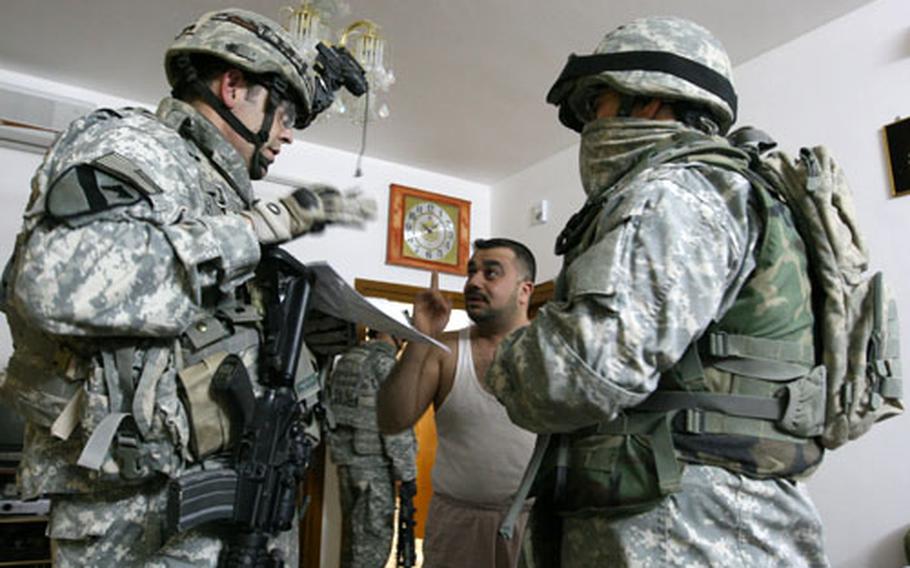 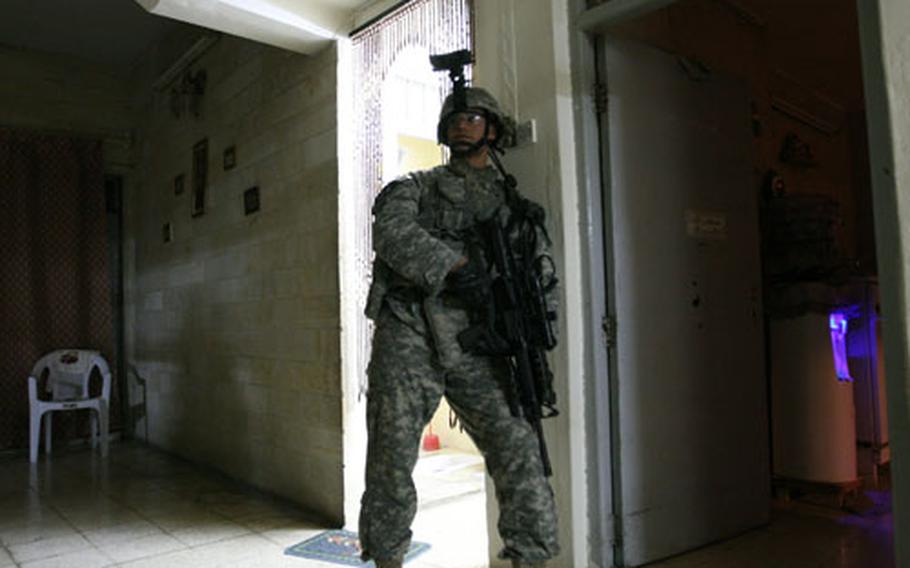 Sgt. Jesus Brown, 26, of Sebago, Maine, stands guard by a door during a visit to a neighborhood in Mosul. (Drew Brown / S&S)

MOSUL, Iraq &#8212; A column of U.S. and Iraqi Humvees moved under cover of darkness through the narrow winding streets of Farouk, one of the oldest neighborhoods in Mosul&#8217;s old city.

The troops were looking for a man known as Abu Bakr, the emir of a local insurgent cell. U.S. soldiers with the 2nd Battalion, 7th U.S. Cavalry Regiment had been tracking Bakr for the past nine months.

Word was that Bakr had slipped into Syria weeks earlier but was now back in Mosul.

U.S. forces believed Bakr was staying in Farouk along with an unknown number of foreign fighters. Iraqi forces would lead the raid, with troops from Company B, 2-7 Cav as backup.

The soldiers sprinted through a maze of alleyways littered with garbage and reeking of raw sewage. After a few blocks, they took up positions at the rear of the first house. The Iraqi troops were on the next block over, covering the front. The streets were quiet. It was just after 11 p.m.

The radio crackled as commands were issued. After about 15 minutes, Vratny&#8217;s team was ordered back to their Humvees.

Word soon came over the radio that the Iraqis had nabbed Bakr at the first house. They detained two more men at the second house, directly across the street. Within 10 minutes, they&#8217;d cleared the third house, just around the corner, and were soon entering the fourth house, down the block.

The raid was over in less than 30 minutes; Vratny&#8217;s team was ordered back to base.

The can-do spirit exhibited by Iraqi forces during the raid last Friday has helped put al-Qaida and other insurgent groups on the run in Mosul and across Ninevah province, said Col. Stephen Twitty, commander of 4th Brigade, 1st U.S. Cavalry Division.

&#8220;I can honestly tell you that the Iraqi army and police (in Ninevah province), regardless of what you hear about other provinces, these guys are fighters,&#8221; Twitty said.

Since 4th Brigade took over security responsibilities in Ninevah 13 months ago, Iraqi army and police &#8220;have since demonstrated an ability to conduct counterinsurgency operations &#8230; and now operate independently,&#8221; Twitty said.

That&#8217;s a far cry from three years ago, when security in Ninevah nearly collapsed when insurgents stepped up violence after U.S. troops recaptured Fallujah.

In addition to the successful raid Friday, Iraqi troops have captured or killed four top-ranking al-Qaida emirs and &#8220;numerous other&#8221; insurgent figures throughout Ninevah, Twitty said.

&#8220;In all provinces, the enemy is off-balance and unable to plan, finance or execute coordinated operations to near the level it had prior to the surge,&#8221; Mixon said. He added that insurgent attacks had dropped for the past three months and were on track to drop further in October.

Insurgent attacks across Ninevah averaged 18 a day when 4th Brigade first arrived in Iraq more than 13 months ago, Twitty said. But that average has since been cut in half. The brigade has suffered 29 soldiers killed.

Twitty credited several major clearing operations for the turnaround. U.S. and Iraqi forces killed 61 insurgents and detained another 271 during a major push in April. Another in August focused solely on clearing Mosul.

Now insurgent attacks across Ninevah have dropped to an average of six to nine incidents per day, he said.

Still, there have been significant setbacks. A truck bomb last March in Tal Afar, west of Mosul, killed more than 100 people. On May 16, insurgents blew up nine car bombs in the province, which destroyed two bridges and damaged two police stations plus a jail holding suspected fighters. Another truck bomb in August killed about 300 members of the Yazidi religious sect, the single deadliest terrorist attack of the war.

Instead of instilling fear in the populace and shaking public confidence in Iraqi and coalition forces, these attacks produced the opposite effect, Twitty said.

The challenge is to figure out how to continue the momentum, Twitty said.

Part of the answer lies in winning the trust and confidence of the local population. But if a visit Saturday night to two Mosul neighborhoods was any indication, U.S. forces still have a long way to go in that regard.

A group of about 25 soldiers from Company C, 2-7 Cav, went into Zahur and Masarif just before curfew to talk to local residents. Their mission was to confirm the location of important sites, such as mosques and police stations, and to see if basic services, such as water and electricity, were being delivered. They also wanted to gauge the feelings of residents towards U.S. and Iraqi forces. The information would be passed on to U.S. forces relieving them in December.

The reaction was mixed. Several residents didn&#8217;t want to talk or gave minimal responses. Very few of them claimed to know their neighbors or much about what went on in the neighborhood after dark. Nobody gave information on the comings and goings of insurgents.

At one house, when Trujillo asked two men what they thought about coalition forces, he got a smile, but a terse, &#8220;No comment.&#8221;

But an Iraqi man at another house was more forthcoming.

Trujillo said he understood the man&#8217;s feelings and he appreciated his honesty.

Trujillo and 2-7 Cav are scheduled to rotate home to Fort Bliss, Texas, in early December.