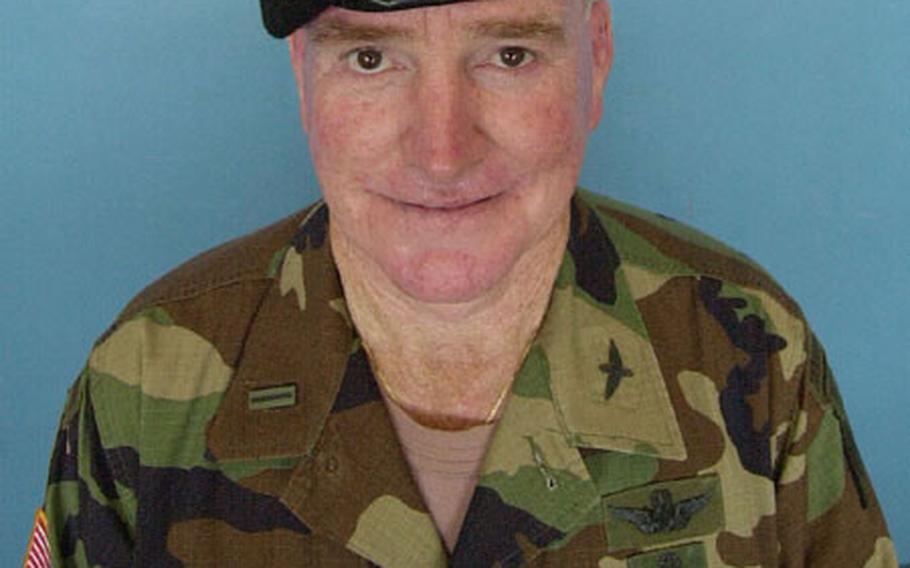 Chief Warrant Officer 5 Kenny Collier, commander of the jet detachment for the 78th Aviation Battalion at Camp Zama, Japan, shows off the two new collar devices he began wearing Thursday — one of the first soldiers in the Army to do so. To celebrate the Warrant Officer Corps 86th anniversary, all warrants began wearing the insignia of their career branch on Friday. The device on his left indicates he is an aviation officer. It replaces the Rising Eagle insignia worn by all warrant officers since 1921. On his right collar, the device tells Collier’s rank. (Jim Schulz / S&S)

CAMP ZAMA, Japan &#8212; Last week, 22,000 Army warrant officers tore off the Rising Eagle collar patch worn exclusively by warrants since 1921 and replaced it with the patch of their career branch.

The step is symbolic of their integration into the officer corps &#8212; warrants comprise 15 percent of active-duty officers &#8212; but in the eyes of some, also the end of a unique era.

Modern warrants began as experienced soldiers selected from the senior enlisted ranks to serve as leaders in the areas of their expertise. Their skills placed them in a category above enlisted ranks, but they were more specialized than officers.

In the 1980s, the Army expanded the corps to make it more tactical and functional, adding a leadership component, and began commissioning chief warrant officers.

&#8220;They derive their authority from the same source as commissioned officers but remain specialists, in contrast to commissioned officers, who are generalists,&#8221; read a field manual describing the ranks in 1986. &#8220;As leaders and technical experts, they provide valuable skills, guidance, and expertise to commanders and organizations in their particular field.&#8221;

But they remained in their own class, recognizable by the distinctive patch only they wore.

A 2002 study recommended blending the warrant officer corps into the overall officer corps. To aid in that progress, Army leaders decided warrants should wear the branch collar insignia of their officer counterparts. The new device requirement went into effect Friday, the 86th anniversary of the corps.

Some warrants see the change as a reflection of their increasingly important function in the Army.

Collier was the first chief warrant officer 5 in the Army to change to the new insignia as well as adding a new rank insignia. Also effective Friday, CW5s began wearing a new rank bar matching CW5s from other services. Due to flight schedules, the 78th changed Thursday, a day early.

Chief Warrant Officer John W. Chizmar, president of the Morning Calm chapter of the U.S. Army Warrant Officers Association in South Korea, said the 800 or so warrants within U.S. Forces Korea have strong feelings about the change.

&#8220;This is a significant emotional experience for a lot of warrants, particularly for the guys who have been in the corps 15 or 20 years,&#8221; said Chizmar, 1st Signal Brigade&#8217;s warrant and maintenance branch chief. &#8220;I&#8217;ve got mixed emotions, but like everything else in the Army nothing is immune from transformation.&#8221;

Leferink said by existing apart from regular officers, warrants have had the ability to go outside regular channels to advise commanders. They didn&#8217;t have the same concerns of line and company-grade officers.

The change might alter the way warrants function, but it represents the evolving concept of what the Army needs them to be, he said.

Many younger warrants are sorting out how officers and enlisted soldiers will view them now that they&#8217;ve been integrated into the officer corps, Chizmar said.

Most warrants support the change and see it as similar to when the Army changed to the black beret, which at the time raised concerns. A year from now, Chizmar said, &#8220;it will be like there was no big change.&#8221;

&#8212; Jeremy Kirk contributed to this report.