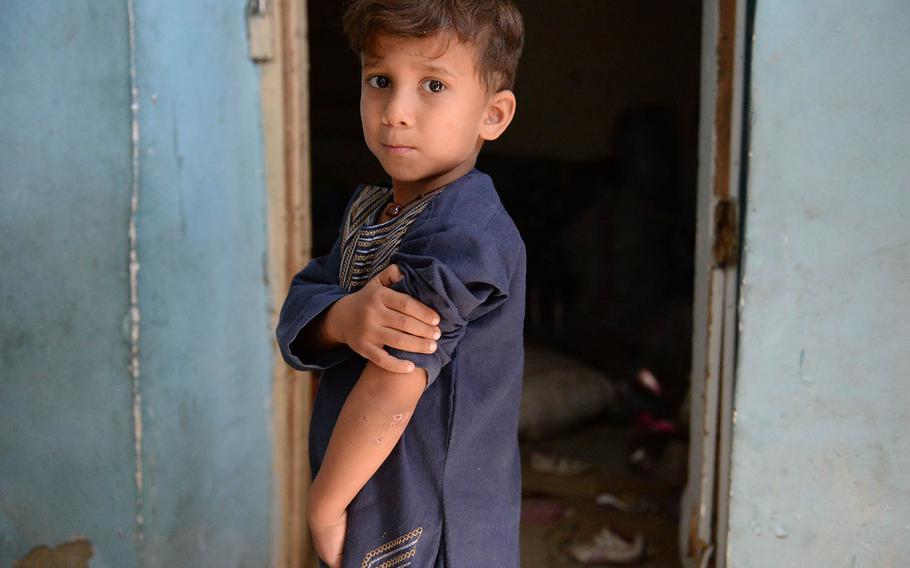 Buy Photo
A young Afghan boy on Oct. 8, 2017, reveals the wounds he got when a U.S. missile hit is house in Kabul more than a week before, injuring several of his family members. (Phillip Walter Wellman/Stars and Stripes)

Buy Photo
A young Afghan boy on Oct. 8, 2017, reveals the wounds he got when a U.S. missile hit is house in Kabul more than a week before, injuring several of his family members. (Phillip Walter Wellman/Stars and Stripes) 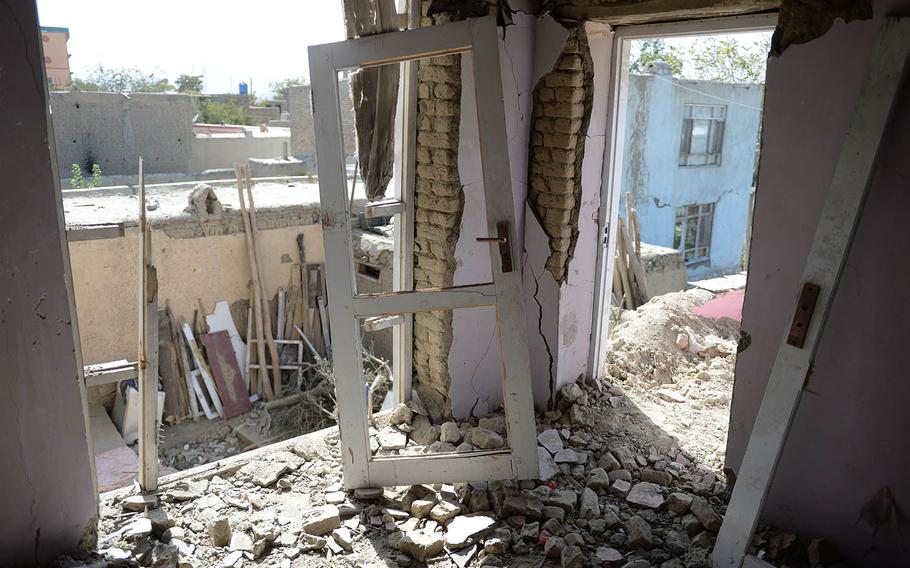 Buy Photo
A house in Kabul stands in ruins on Oct. 8, 2017, more than a week after a U.S. missile mistakenly hit it, injuring several civilians. (Phillip Walter Wellman/Stars and Stripes) 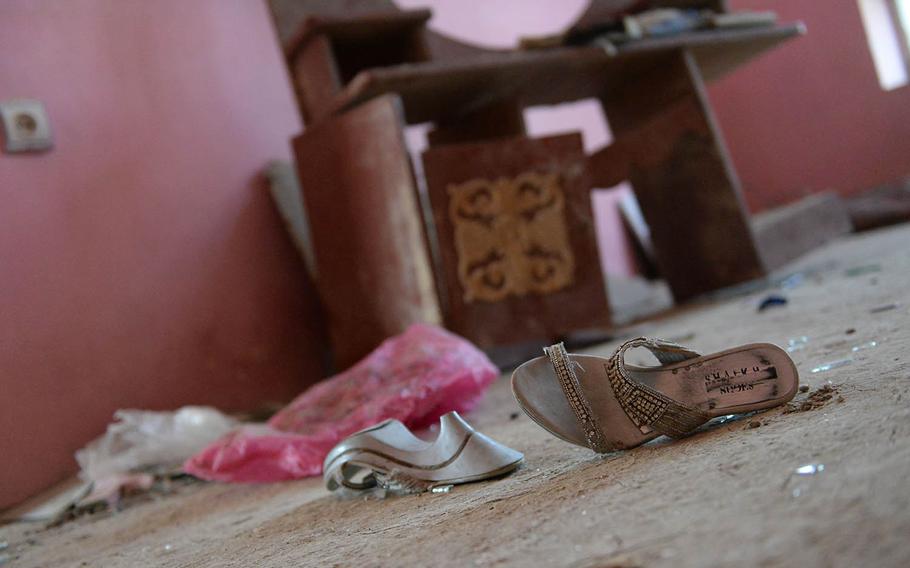 Buy Photo
Shoes, broken glass and other debris litter the floor of a Kabul house on Oct. 8, 2017, after a U.S. missile struck it by mistake more than a week before. (Phillip Walter Wellman/Stars and Stripes) 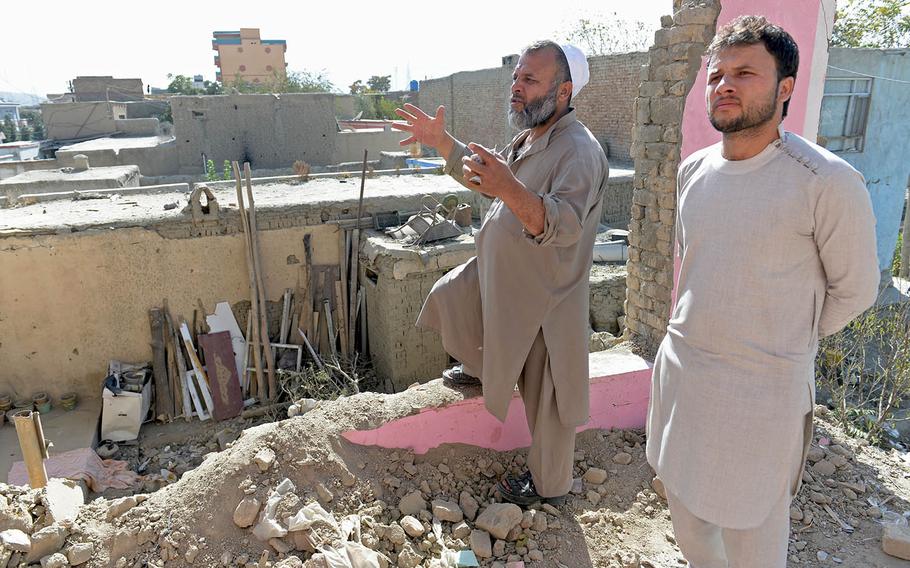 Buy Photo
Ghulam Rabani, left, and his nephew Fardin, who like many Afghans uses just one name, stand in a second-story room of their home in Kabul on Oct. 8, 2017. Rabani explains how a U.S. missile destroyed the house more than a week before, injuring several family members. (Phillip Walter Wellman/Stars and Stripes) 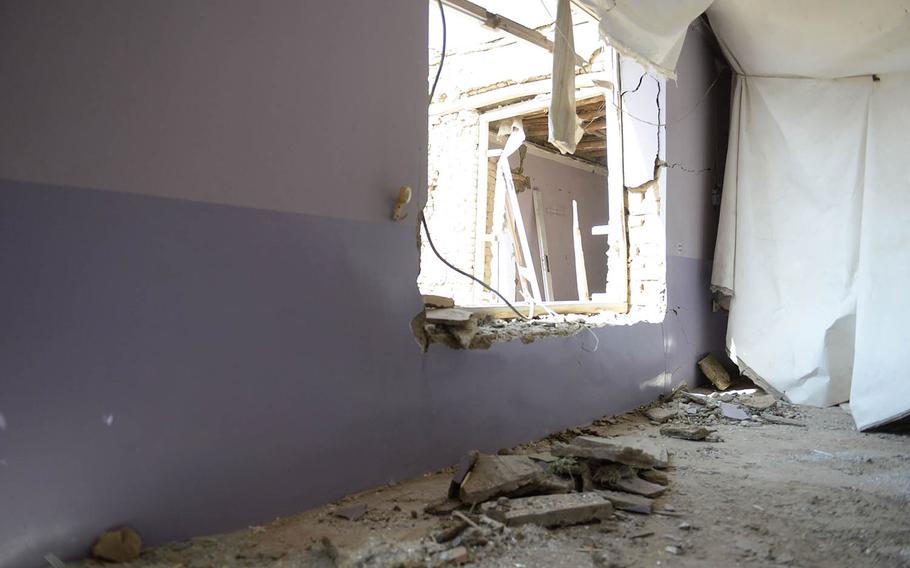 Buy Photo
Glass and other debris litter the room of a home in Kabul on Oct. 8, 2017. A U.S. missile mistakenly hit the house more than a week before, destroying it and injuring several people. (Phillip Walter Wellman/Stars and Stripes) 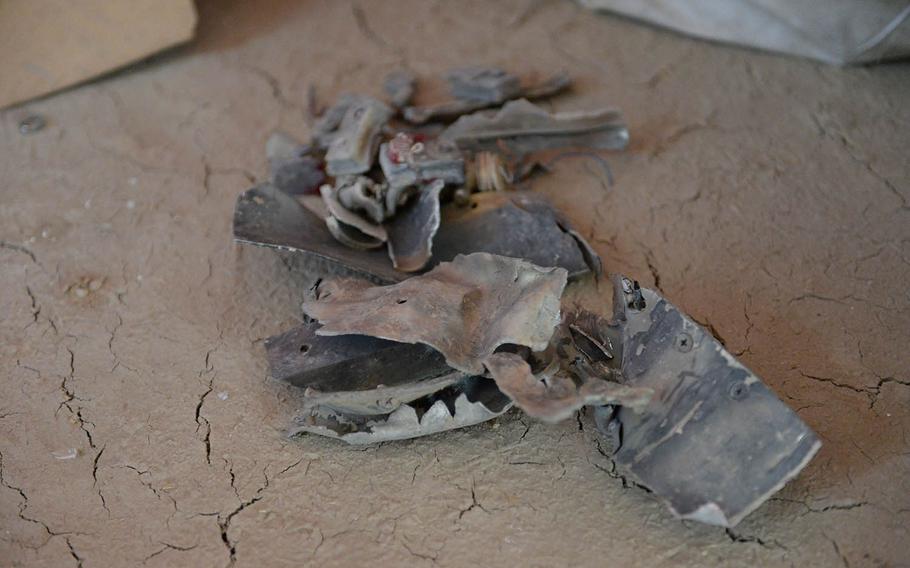 Metal scraps an Afghan family says are part of a U.S. missile that destroyed their house sit in a corner on Oct. 8, 2017. (Phillip Walter Wellman/Stars and) 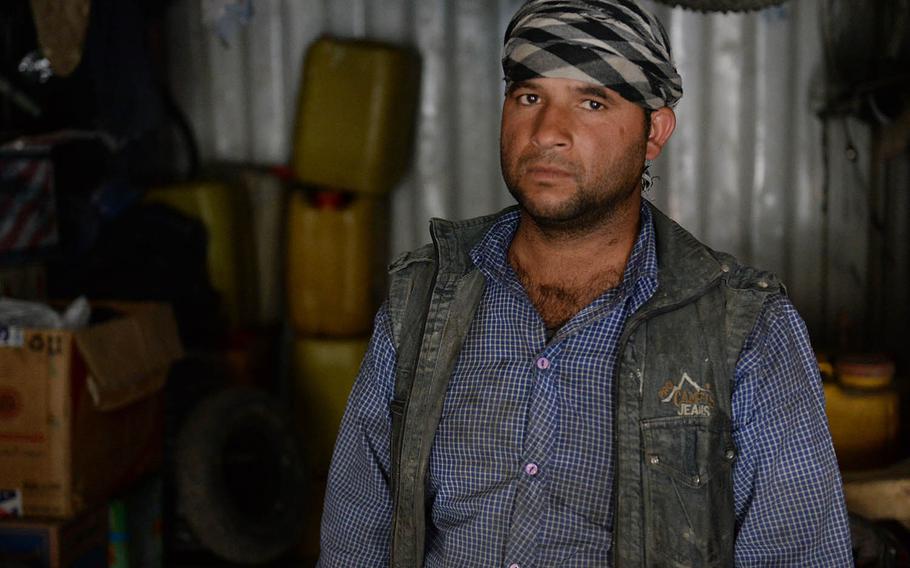 Tamim, who like many Afghans uses just one name, stands in his workshop on Oct. 8, 2017. He was in his workshop more than a week before when he heard a U.S. missile hit his family home a short distance a way, injuring several of his family members. (Phillip Walter Wellman/Stars and)

KABUL, Afghanistan — Ghulam Rabani was in his bathroom, washing for prayer, on a warm afternoon last month when a wall collapsed on him.

“There was dust everywhere, and for a few seconds, I couldn’t see anything. I could only hear my family screaming,” said Rabani, a taxi driver.

Strikes like this one are adding to fears that the new U.S. strategy for the Afghan War that loosens restrictions on air support, could cause more civilian casualties and could undermine coalition efforts in the country. Meanwhile, newly released United Nations data indicate that the airstrike casualty rate already was headed upward.

In the first nine months of this year, civilian casualties from U.S. airstrikes rose by about 80 percent, to about 180, from some 100 during the same period last year, the U.N. Assistance Mission in Afghanistan said in a report released on Thursday.

Fighting the Taliban has become more difficult as the insurgents increasingly operate in residential areas like Rabani’s neighborhood, deliberately putting civilians at risk. During the Taliban’s Sept. 27 attack on the airport, the U.S. conducted an airstrike to help Afghan forces battle the insurgents. Rabani’s house was hit by a malfunctioning missile. The U.S. military said in a statement it deeply regretted the incident.

“They had to target the attackers. We understand that,” said Fardin, Rabani’s nephew, who also lived in the house and like many Afghans uses just one name. “But they never met with us afterward to apologize. We heard their comments on TV like everyone else. They should at least come talk to us to see what happened here.”

Rabani was invited to speak with officials at NATO’s headquarters in Kabul about two weeks after the blast. He said he was optimistic they would provide compensation. When contacted by Stars and Stripes, the NATO mission said it would not discuss compensation out of respect for the family and to protect their safety.

Shortly before the visit, Rabani and Fardin gave a tour of their destroyed home about a week and a half after the missile struck.

Glass, broken concrete and other debris littered every room. In one room, they pointed to a spot where Rabani’s nearly 3-year-old granddaughter was found buried under a pile of rubble. In another spot, his 6-year-old grandson was trapped under a piece of furniture.

The boy later walked over to show wounds on his arm before going to a broken desk, where he flipped through a children’s book with burned pages. The 3-year-old also survived the strike.

Nine members of the family were injured and taken to the hospital, Rabani said. Three remain there. The family had to move into another relative’s house, where space is limited. Speaking from a second-floor room at his house, now exposed after two walls and the ceiling fell away, Rabani described how his neighbors were angry with the U.S. for not reaching out and providing compensation immediately.

“We don’t have money to treat our wounded family members, let alone rebuild this house,” he said. “And people are angry about it. People in the community wanted to hold a demonstration and block roads, but I told them to wait and be patient.”

Afghan officials said they had given Rabani an undisclosed amount of money, which Rabani said was about $1,470. Mounting civilian casualties from airstrikes risk undermining coalition efforts at stabilizing Afghanistan and have been used by the Taliban as a recruiting tool in the past. During President Barack Obama’s troop surge after 2010, frequent civilian casualties were a main cause for strained relations between Washington and President Hamid Karzai’s government.

More US firepowerBesides a troop increase of over 3,000, the Trump administration’s new strategy for Afghanistan includes more firepower and relaxed restrictions on targeting Taliban insurgents. Mattis told the Senate Armed Services Committee earlier this month that he had removed “proximity requirements” for strikes against the Taliban that will likely result in more U.S. bombs dropped, continuing a rising trend already seen this year.

In September, U.S. warplanes dropped 751 weapons in Afghanistan, a nearly 50 percent increase from the previous month and the highest monthly tally since October 2010, according to Air Force data. The U.S. dropped 3,238 bombs in Afghanistan between January and September, more than double last year’s total.

Together, Afghan and U.S. airstrikes caused 466 civilian casualties during the first nine months of 2017, a 52 percent spike from the same period last year, UNAMA said. Of those 205 deaths and 261 injuries, 38 percent were attributed to international military forces — meaning the United States, which is the only foreign force conducing airstrikes in the country.

Insurgents were responsible for more than 60 percent of the civilian deaths and injuries, UNAMA said. Besides aerial attacks, the causes of death this year include suicide and complex attacks, targeted and deliberate killings and pressure-plate bombs.

“While UNAMA welcomes the decrease in civilians injured by armed conflict, the mission notes with deep concern that civilian deaths remain at high levels,” the report said. “UNAMA urges parties to the conflict to intensify efforts to protect civilians from harm.”

Back in his destroyed home, Rabani said the U.S. should be more careful.

“In the future, people won’t tolerate it,” he said. “People will be out of patience. People are already angry. They want to go demonstrate. In the future, I don’t think they’ll tolerate more mistakes.”