'Rippers' light up the sky during 2nd ID artillery training 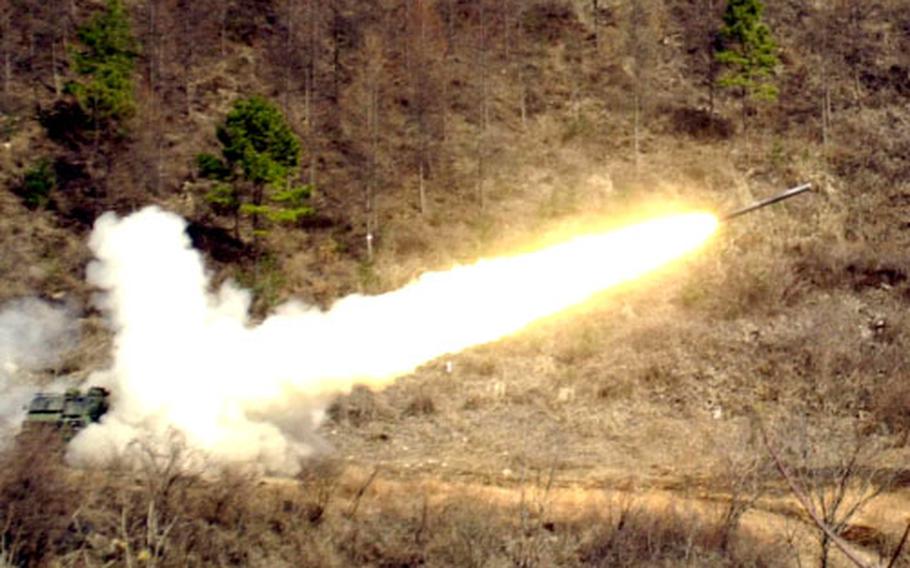 BOAR 1 TRAINING AREA, South Korea &#8212; Even on a sunny day, a rocket fired from the Multiple Launch Rocket System lights up the sky.

Intense fire flashes and long plumes of smoke trailed through the valley gorges of this remote training area at the northeastern edge of Gyeonggi Province this week as the 2nd Infantry Division&#8217;s 1st Battalion, 38th Field Artillery completed its semiannual training.

The crews launched &#8220;rippers&#8221; &#8212; rockets with a short range of about nine miles and no explosive charges attached. Other available rockets are capable of strikes of about 18 miles and about 27 miles, 1-38 commander Lt. Col. Keith Bean said.

Soldiers say the rockets can be used to destroy a variety of targets, including infantry, tanks and fixed sites. They function well as responsive air defense artillery when friendly troops are under rocket attack, Bean said.

The system used during training is a tracked vehicle with two six-rocket pods. The MLRS was used extensively during Operation Desert Storm. It has since undergone technological improvements, said launcher chief Staff Sgt. Samuel Duncan, who has 14 years of experience launching rockets.

The launch panel has become more user-friendly, he said. There are also redundant warning systems during the launch sequence.

While the airborne rockets are the most visible aspect of 1-38&#8217;s training this week, the field time also was a chance to brush up on communications, support and maintenance.

Cpl. Joe Zabienski&#8217;s job included assembling a spare launching system. He had hoped the vehicle only needed a few spare parts, but the job proved more extensive, he said.

Soldiers said Tuesday they were generally happy with the training&#8217;s progress. They had been firing rockets at an accelerated pace to get each crew qualified, they said.