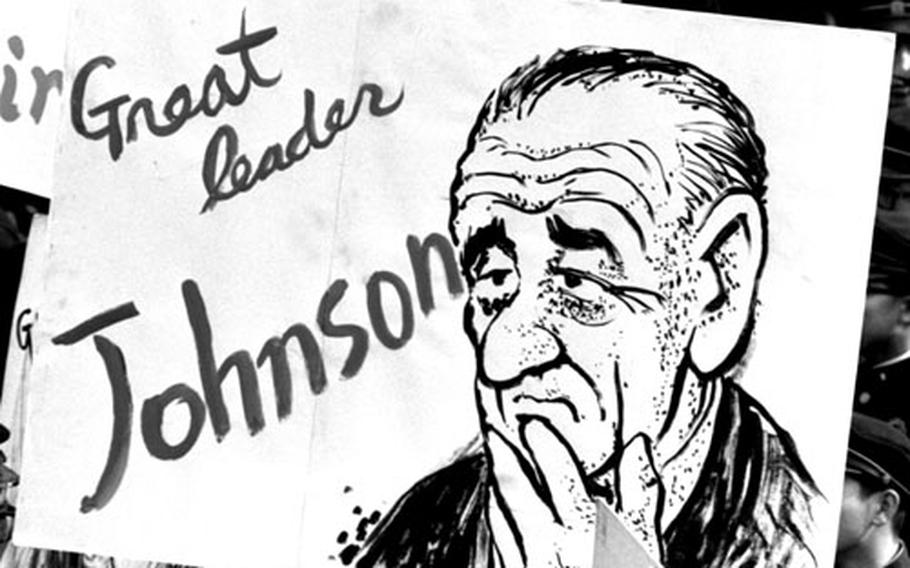 A sign welcoming Lyndon B. Johnson to Seoul is carried by students awaiting the president's arrival at City Hall Plaza. (Fred Braitsch Jr./Stars and Stripes)

They were greeted by an enthusiastic crowd estimated at 2 million as they flew to the Republic of Korea on the last leg of a 7-nation trip.

Officials traveling with the presidential party called the welcome the largest and most enthusiastic of the trip.

At times, the ecstasy almost resulted in tragedy.

Frenzied crowds estimated at 250,000 at Seoul's City Hall Plaza roared approval at the sight of Johnson so loud and long that the speech of Korean President Chung Hee Park was drowned in the din.

The mob also overran a 2,000-member girls' chorus near the presidential stand, trampling some of the girls underfoot, and at one time threatened to break Secret Service lines and overflow onto the speaker's stand.

One 57-year-old Seoul woman was hospitalized with serious injuries after being trampled and 12 persons were treated for minor injuries.

The entire 9-mile motorcade route in Seoul was lined with crowds 20-30 persons deep.

Much of the crowd was made up of schoolchildren waving U.S. and Korean flags and carrying hand-painted signs bearing greetings to the President and First Lady. The city's schools were closed for the occasion.

The President stopped the motorcade five times to shake hands with Koreans along the route between Kimpo International Airport, where he landed at about 3 p.m., and Seoul's city hall. Several times along the route, the crowd surged forward past police lines and flooded around the car bearing the two presidents.

At city hall, order among the roaring crowd was restored only after Deputy Prime Minister Key Young Chang personally took charge of police lines and appealed to the front ranks of the crowds.

Johnson told the city hall crowd that Koreans should be "rightly proud" of the rebuilding job they have done after the Korean War leveled the nation, and suggested that Asia was experiencing "a new spirit of cooperation.

"That spirit of cooperation in this part of the world was shared by the seven nations who met at Manila last week.

"That historic meeting, which you first suggested ... affirmed the broad partnership and the common purpose of free Pacific nations &mdash; a partnership that will endure long after the communist aggression is ended in Vietnam," Johnson said in his speech.

("Here in Korea, our fighting men stand with your own along the Demilitarized Zone, and we shall come once again to your defense if aggression &mdash; God forbid &mdash; should occur here again," he added, AP said.)

("To an American, the free soil of Korea is hallowed ground," Johnson told the throng police estimated at some 350,000.)

("More than 54,000 Americans died in the bitter 1950-53 battle to save this mountainous peninsula country from communist invaders from the north. Today South Korea has around 45,000 soldiers helping the allied cause in South Vietnam.")

The two partnership efforts against Red aggression and Korea's remarkable recent economic progress were main themes of the visit.

Park said Korea had "undiminished appreciation" for the help the United States has given it during the past quarter-century.

"We have been much indebted to you as comrades-in-arms," he said.

"Please be assured that ours is not a nation which will indefinitely continue to be indebted to others, but rather is a nation which knows how to requite its obligations, which has a keen sense of responsibility, and which abides by good faith."

At city hall, Johnson was officially welcomed to Korea and presented a gold key to the city of Seoul by Mayor Hyun Ok Kim.

President and Mrs. Johnson were honored Monday night at a state dinner given by the Korean first family at the national capitol. After the dinner they attended an art festival in Seoul's Citizens' Hall.

Tuesday, Park and Johnson had a private, 30-minute talk.

Johnson was to visit the Korean 26th Inf. Div. and the U.S. 36th Engineer Group, both near Uijongbu, 13 miles north of Seoul later Tuesday. He was to lunch with U.S. troops.

In the afternoon, the President was to visit an agricultural display at Suwon, 20 miles south of Seoul, where he was also to have a hill named after him.

Johnson will wind up his Far East trip Wednesday with visits to the National Cemetery and Korean National Assembly, where he will give a speech on nationwide television.