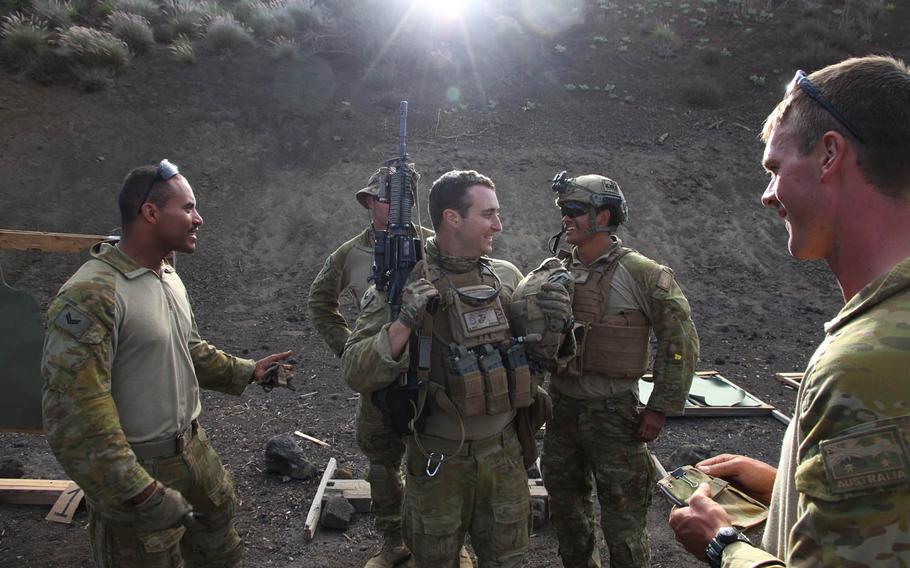 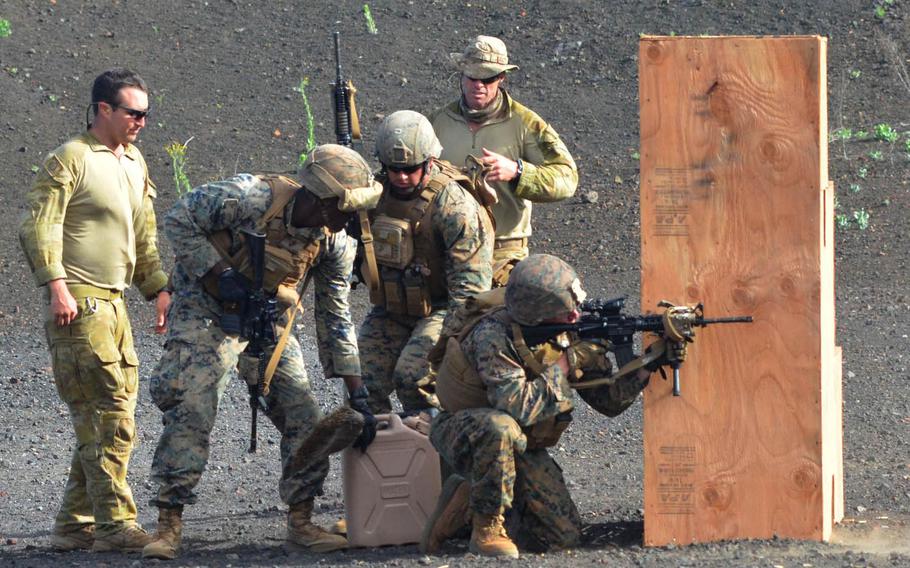 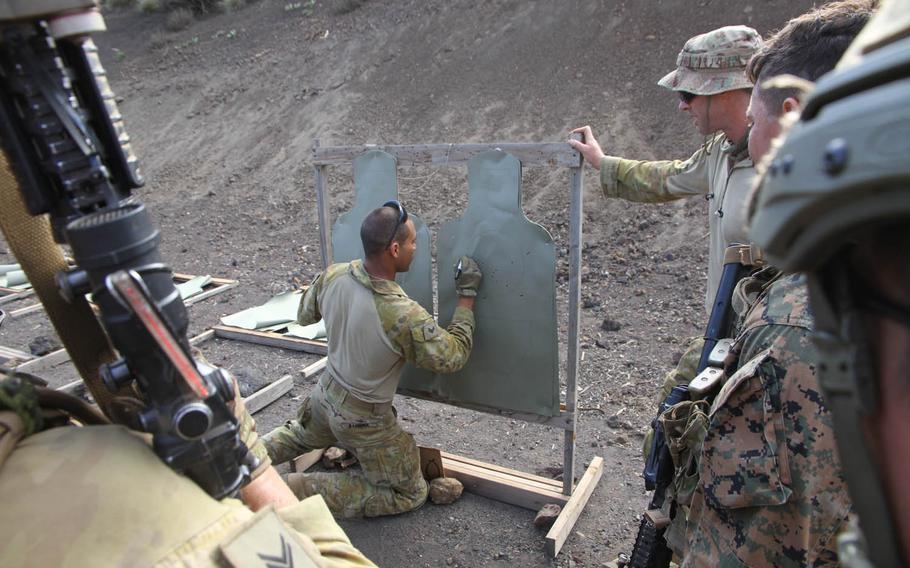 Buy Photo
An Australian soldier monitoring a rifle competition between American and Australian troops marks hits and misses on targets as the participants watch at Pohakuloa Training Area, Hawaii, during RIMPAC 2016. (Wyatt Olson/Stars and Stripes) 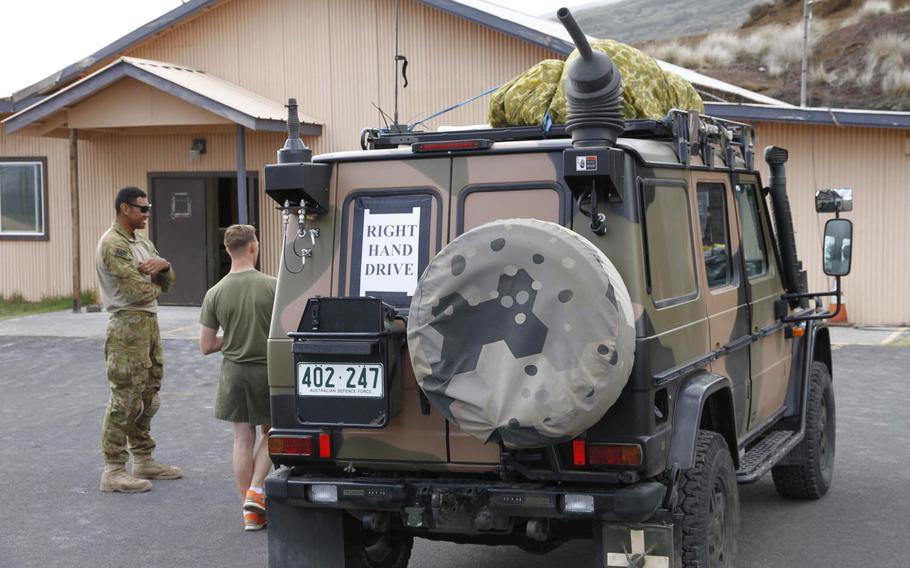 Buy Photo
Among the skills Australian soldiers learn at RIMPAC 2016 in Hawaii is driving in the right lane. (Wyatt Olson/Stars and Stripes) 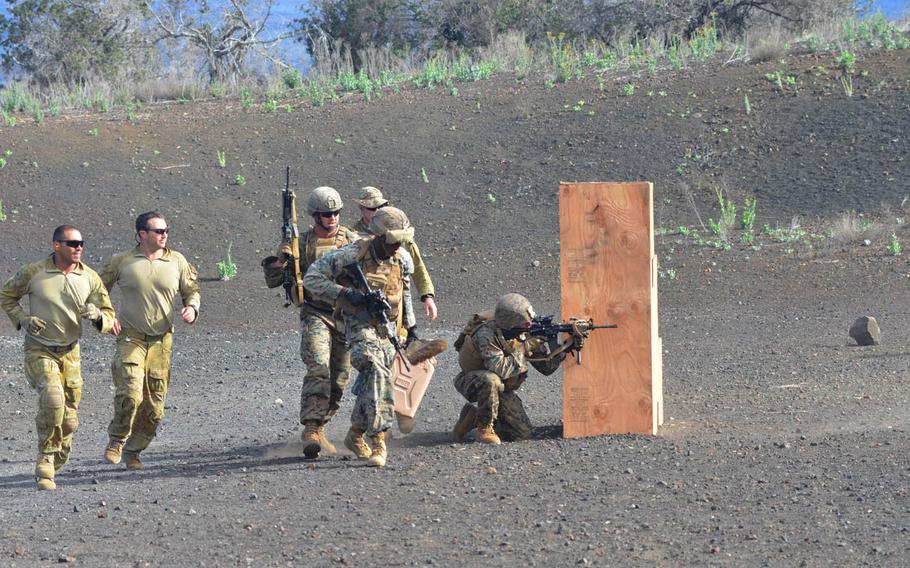 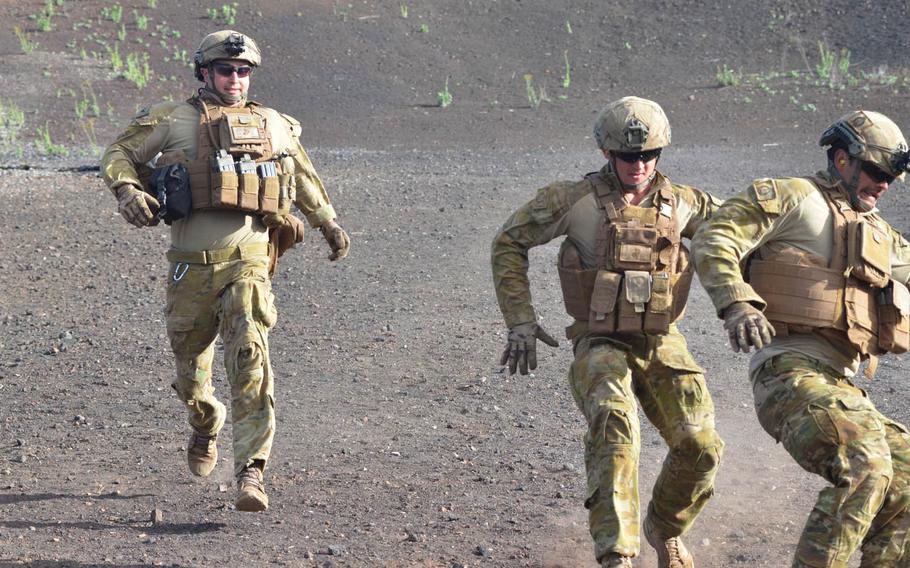 A U.S. Navy landing craft, air cushion from amphibious transport dock USS San Diego enters the well dock of the HMAS Canberra off the coast of Hawaii during the Rim of the Pacific exercise, July 19, 2016. (Steven Thomson/RAN) 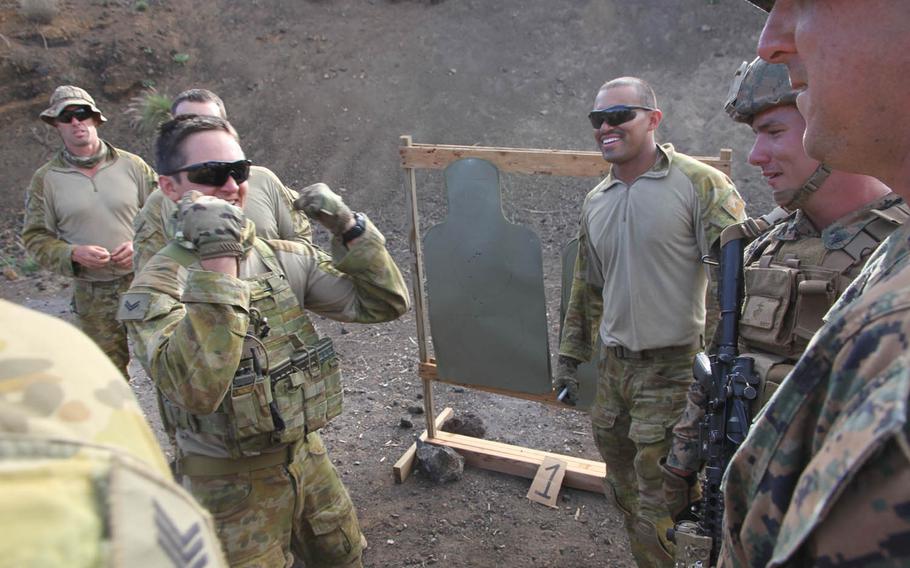 Buy Photo
An Australian soldier celebrates his team's victory in the first round of a rifle competition against U.S. Marines at Pohakuloa Training Area, Hawaii, during RIMPAC 2016. (Wyatt Olson/Stars and Stripes)

POHAKULOA TRAINING AREA, Hawaii — More than two dozen nations are involved in this year’s Rim of the Pacific naval exercise, but the biennial training is putting a special spotlight on the evolving partnership between the U.S. and Australia.

From major amphibious operations to small-arms drills, troops from both countries are honing coordination and sharing skills.

This is the first time Australia has brought an amphibious force to RIMPAC, spearheaded by the HMAS Canberra, the country’s newest generation of LHD, or landing helicopter dock, ships.

Barely two years at sea, the Canberra can deliver about 1,000 troops to shore by sea and aircraft.

A second Canberra-class LHD, the HMAS Adelaide, has been commissioned and is in the process of becoming fully operational.

The catalyst for Australia’s push for cutting-edge amphibious ships was “the strategic shock” of its peacekeeping intervention in East Timor that began in 1999, according to a 2015 report by the Australian Strategic Policy Institute. The operation highlighted the potential requirements for amphibious operations and also the “stark lack of such capability at the time” by the Australian armed forces, the report said.

Australia also brought to RIMPAC a full landing force that is reinforced with a company of soldiers from New Zealand and a platoon from Tonga. The Australians are expected to lead a battalion in the exercise’s grand amphibious assault on July 30.

“Over the course of several weeks of the exercise, we’ve been able to conduct a series of interoperability tests with the U.S. Marine Corps and U.S. Navy combat systems with the HMAS Canberra,” said Col. Carl Cooper, commander of 3rd Marine Regiment, who has been overseeing joint training at Pohakuloa Training Area on the big island of Hawaii.

Earlier this month, the Marines conducted deck-landing qualifications on the Canberra using the U.S. MV-22 Ospreys, he said, adding: “The first time we’ve done that.”

They followed that with deck-landing qualifications for the Marines’ largest helicopter, the CH-53 Super Stallion.

Last week, the Marines launched amphibious vehicles from the USS San Diego — a San Antonio-class amphibious transport dock — and then recovered them on the Canberra.

The Canberra then re-launched them for recovery by the San Diego.

“So over the course of several weeks of the exercise, we’ve been able to integrate not only at the amphibious task-force and landing-force level, but down to the individual combat systems, both ashore and afloat,” Cooper said.

At a personal level, Marines and Australian soldiers are training together for several weeks at the live-fire ranges at PTA, camping in tents on the volcanic-rock bed that covers the area.

Late one recent day, the Australian soldiers set up an elaborate course on the rifle range for a competition between them and U.S. marksmen.

“Some of this is new to me,” said Marine Capt. Gerald Noe of Company G, 2nd Battalion, 3rd Marines, which was set to compete. “What they’re basically doing is a drill simulating that they’ve got a casualty they need to move under cover. The simulated casualty is two water jugs, carried with a broom handle, simulating the weight.”

Working in three-man teams, one person was required to shoot continuously — and accurately — whenever the other two were carrying the jugs to the next position.

The goal was to complete the course as quickly as possible, with penalty time added for each bullet missing the sweet spot on the target or for failing to shoot during the movement of the jugs.

The Australian team bested the Marines by 19 seconds in the first round.

For the second and final round, the teams traded weapons and protective vests to compensate for differing characteristics and weight. As the three Marines donned the much sleeker vests worn by Australian soldiers, a Marine watching the contest asked, “How much lighter does that feel?”

“Amazing. Amazing,” one of them answered.

Fitted with the bulkier U.S. gear, an Australian competitor found the bright side: “They’re heavier but snugger,” he said.

The second go-around proved to be a heartbreaker for the Australians. Although running the casualty course faster, they were penalized heavily for mistakenly shooting at the targets reserved for the Marines.

The Marines won by 12 seconds.