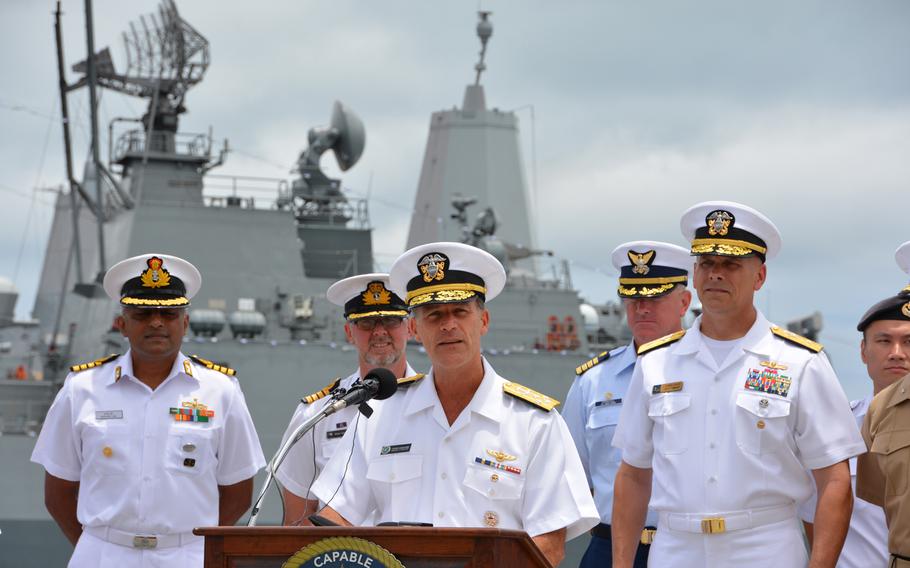 JOINT BASE PEARL HARBOR-HICKAM, Hawaii — The absence of China’s rising navy won’t have much impact on this year’s Rim of the Pacific drills, the commander of U.S. Pacific Fleet said during a dockside launch of the month-long exercise.

The U.S. rescinded China’s invitation last month over actions the nation has taken in the South China Sea.

Last month, Defense Secretary Jim Mattis said that “China continues to militarize features in the South China Sea” by utilizing “weapons that just a few years ago they said they would not be putting there.”

According to Aquilino, China’s actions in the South China Sea are “exactly contradictory to the entire purpose” of RIMPAC.

In 2016, China brought five ships and about 1,200 personnel to the biennial exercise.

“I would say that very little will change,” Aquilino said of China’s absence from RIMPAC. “The events that they were scheduled to participate in, they will not — but all of the same benefit exists from the like-minded nations that are participating in this particular event.”

Those 25 nations will bring together a fleet of 46 warships and five submarines and troops from 18 national land forces — along with more than 200 aircraft and 25,000 personnel.

“We are all maritime nations,” said Vice Adm. John Alexander, commander of U.S. 3rd Fleet and head of RIMPAC’s combined task force. “We all prosper through trade, and the majority of trade goes through the Indo-Pacific region.”

New at this year’s exercise are live-fire drills that involve the Army’s Multi-Domain Task Force shooting a Navy missile to sink a ship at sea, and the Air Force dropping long-range anti-ship missiles, Alexander said.

“It’s the first time we’ve done something like this [at] RIMPAC,” Alexander explained. “We’re looking to expand this in 2020.

“It’s a maritime exercise, but we have ground forces supporting a maritime environment,” he added.

For the first time, the Philippines has brought two ships, a frigate and a landing platform dock, to the exercise.

The first non-founding member of RIMPAC, Chile, will command the combined-forces sea component during this year’s event.

“This is the largest maritime exercise in the world, and it’s a tremendous responsibility,” said Chile’s Commodore Pablo Niemann, who will head the sea component.

This is the 12th time Chile’s navy has participated in RIMPAC, and its sailors have been “working up the ladder of responsibilities” to earn the command spot in 2018, he said.

According to Niemann, Chile’s is a small navy, with eight frigates, four submarines, an amphibious task force and a host of small boats for patrolling its long coast.

“We thought that this year, being our 200th anniversary as a navy, would be a good time to challenge ourselves with a responsibility of this size and scope,” he said.