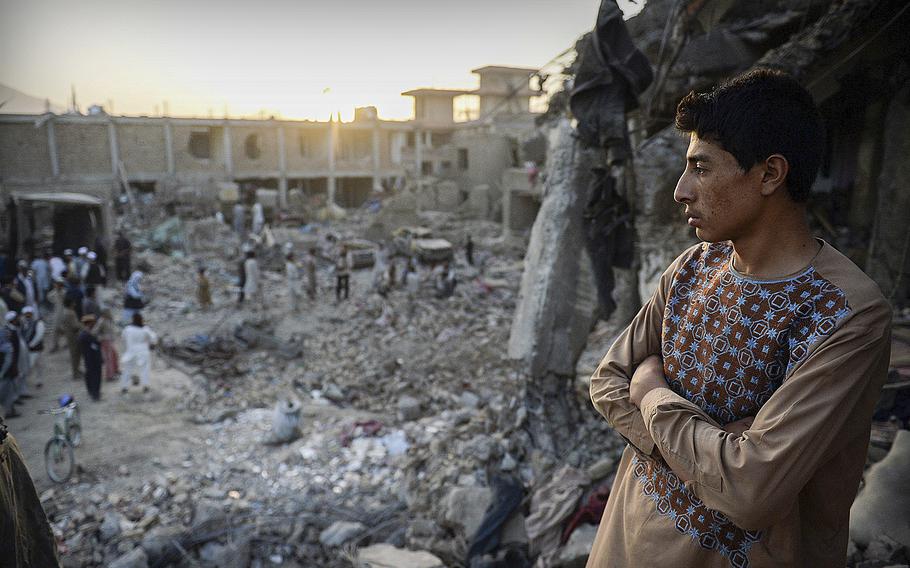 A young man looks across the devastation caused by a massive truck bomb in Kabul, Afghanistan, on Aug. 7, 2015. A report issued by Human Rights Watch on Wednesday, Jan. 27, 2016, said escalating violence has had "devastating consequences" for civilians. (Josh Smith/Stars and Stripes)

“As reforms have slipped, so have essential human rights protections for detainees, women, and the media,” Patricia Gossman, a senior Afghanistan researcher with the group, said in a statement. “Donors will need to work more closely with the Afghan government to ensure that the fragile gains of the past 14 years aren’t lost.”

The findings were summarized in the group’s World Report 2016, which reviewed human rights in more than 90 countries.

“During the past year, the government struggled to overcome internal divisions and conflicts with local strongmen and power brokers, while infighting among government institutions jeopardized the broader reform agenda,” HRW said. “Abuses by government security forces and advances by the Taliban further undermined public confidence in the government.”

HRW said government forces were “increasingly responsible for civilian casualties during ground offensives, mainly through the use of mortars and rockets used indiscriminately in civilian-populated areas.”

President Ashraf Ghani issued an order in August to all security agencies to assess their operating procedures to curb civilian casualties.

Despite committing to uphold human rights, the government headed by Ghani and Chief Executive Abdullah Abdullah has failed to enforce measures aimed at curbing torture of prisoners and to improve women’s rights, HRW said.

Ghani approved an action plan against torture last year, but acts of torture carried out by security officials increased in 2015 compared to 2014, as the security situation in the country worsened, HRW said.

In September, the Taliban seized control of Kunduz, holding the northern city for nearly two weeks before Afghan security forces, with U.S. air and ground support, regained control. It was the first takeover of an Afghan city since the Taliban were ousted from power in 2001.

In response, the government granted broad powers to local security agencies, including Afghan local police, who have a history of rape, extortion, and unlawful killings, HRW said.

“Atrocities by the Taliban and other insurgents are no excuse for the government to deploy abusive militias or fail to hold the security forces accountable for violations,” HRW’s Gossman said.

Afghan government officials had no immediate comment on the report.

But Kubra Mustafawi, a member of the human rights commission in Afghanistan’s lower house of parliament, said the government could do more to improve the country’s rights record.

“We can’t get out of political, security and economic chaos unless we bring reforms in corruption, promote human rights and get rid of cruel militias,” she said.

Mustafawi lamented the slow progress for women, whom HRW said the government has failed to protect.

A February report by the U.N. Assistance Mission in Afghanistan found that 65 percent of those cases involving serious abuses that had been filed under the country’s Elimination of Violence against Women law were resolved through mediation, while only 5 percent led to criminal prosecution.

“The standing given to women in our constitution is not fully implemented yet,” Mustafawi said.

“When the new government was established in Afghanistan, they said they would bring change, but not much has been done, unfortunately,” he said. “We haven’t seen any notable change regarding human rights in the last year.”