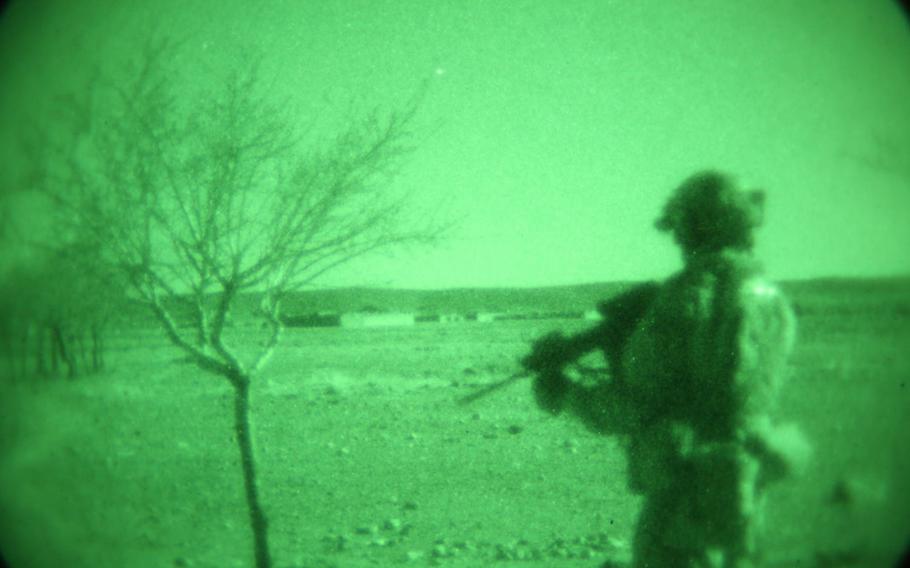 An commando guards a compound during the clearance of a village in Maiwand district, Kandahar province, in February 2014. A separate operation by Afghan forces in the district on Jan. 31, 2018, is alleged to have killed 20 people. (Bertha A. Flores/U.S. Army)

KABUL, Afghanistan — Witnesses claim that Afghan security forces summarily executed civilians during a recent joint operation with U.S. forces — an allegation that a human rights organization says should be investigated by the Afghan government and the U.S. military.

Human Rights Watch said on Wednesday that the incident took place late on Jan. 31 and into the early hours of Feb. 1, when civilians fled U.S. airstrikes in southern Kandahar province. Locals told the organization that at least 20 civilians were executed.

An Afghan special operations unit launched an offensive in Kandahar’s Maiwand and Panjwai districts against the Taliban on Jan. 31, which was backed by U.S. airstrikes.

At least 50 Taliban fighters — including some key commanders — were killed, Afghanistan’s National Directorate of Security said at the time.

Navy Capt. Tom Gresback, a spokesman for the U.S. military in Kabul, said that “all of those killed in the operation were identified as Taliban fighters.”

Witnesses who spoke to Human Rights Watch said security forces dragged some men from their homes and shot them.

“Summarily executing people in custody, whether they are fighters or civilians, is a war crime,” said Patricia Gossman, a researcher at Human Rights Watch. “A prompt and impartial investigation” was needed to determine exactly what happened during the assault, Gossman said.

Ahmad Zia Durrani, a spokesman for Kandahar’s police chief, told Stars and Stripes on Wednesday that two members of a family that had “helped the enemy” were wounded when their house was raided and that these were the only civilian casualties caused by the operation.

“I’m 100 percent sure that these were the enemies of the Afghan people,” Durrani said.

Kabul has taken steps recently to reduce civilian casualties, which can weaken support of the government and risk undermining the international mission in the country. These include the adoption of a national policy to prevent civilian casualties in October, and the ratification in August of the 1980 Convention on Certain Conventional Weapons.