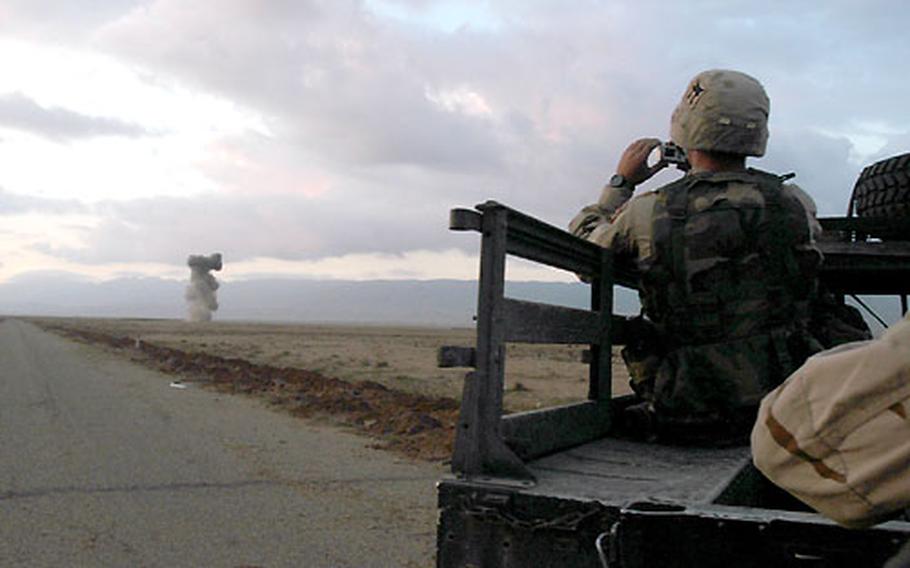 Combat engineers with Company C, 326th Engineering Battalion, attached to the 101st Airborne Division, take photos from a safe distance after the mortars and grenades are detonated. (Kendra Helmer / Stars and Stripes)

Combat engineers with Company C, 326th Engineering Battalion, attached to the 101st Airborne Division, take photos from a safe distance after the mortars and grenades are detonated. (Kendra Helmer / Stars and Stripes) 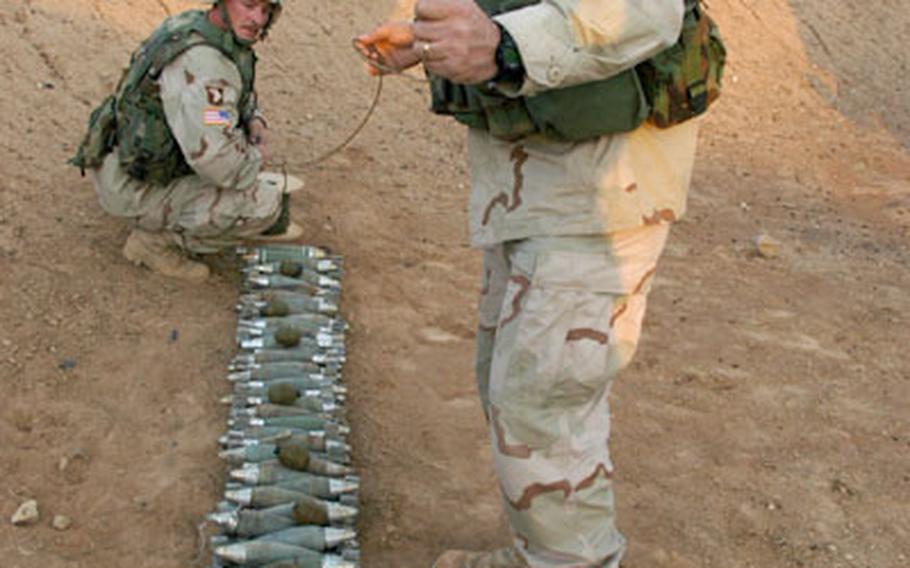 SINJAR, Iraq &#8212; Iraqis line up outside the gates of Range 54 daily, ready to hand over weapons in exchange for cash.

So nearby villagers collect a bunch of weapons that qualifies as a cache. About 40 Iraqis a week turn in loads of weapons to the camp in northern Iraq; half of them are members of the Coalition for Iraqi National Unity (CINU), said Capt. Jeff Csoka, assistant operations officer.

The group, which says its purpose is to promote peace and unity among tribes and coalition forces, scours the area for weapons, Csoka said.

&#8220;On average, CINU turns in on a daily basis to us more weapons and ammunition than are seized through combat operations by the entire 101st Airborne Division in a day,&#8221; Arnold said, based on news releases about what the division seizes.

&#8220;We blow something up almost daily,&#8221; smiled Sgt. 1st Class Paul Dominguez, 39, platoon sergeant, as he wrapped detonation cord around a few dozen mortar rounds on a dirt berm. After the soldiers pulled the fuse igniter, they drove a safe distance and waited for the &#8220;boom!&#8221; One soldier videotaped the explosions to show his family.

Even though the detonations are a daily task for them, it&#8217;s still a thrill.

The battalion doesn&#8217;t reward Iraqis for turning in AK-47s and pistols because they&#8217;re so prolific, and prices for most weapons are not guaranteed. An RPG launcher fetches $10 to $40, and a hand grenade gets about $10. A complete surface-to-air missile system, though, draws a guaranteed $500. Over three months, Csoka estimated $10,000 had been rewarded.

Csoka said the money comes from whatever battalion funds are left over week&#8217;s end. Some of the cash comes from goods that forces have confiscated from smugglers sneaking across the Syrian border.

When an Iraqi turns in weapons, Csoka takes down the man&#8217;s name so he knows how much money to give him on Sunday, payday.