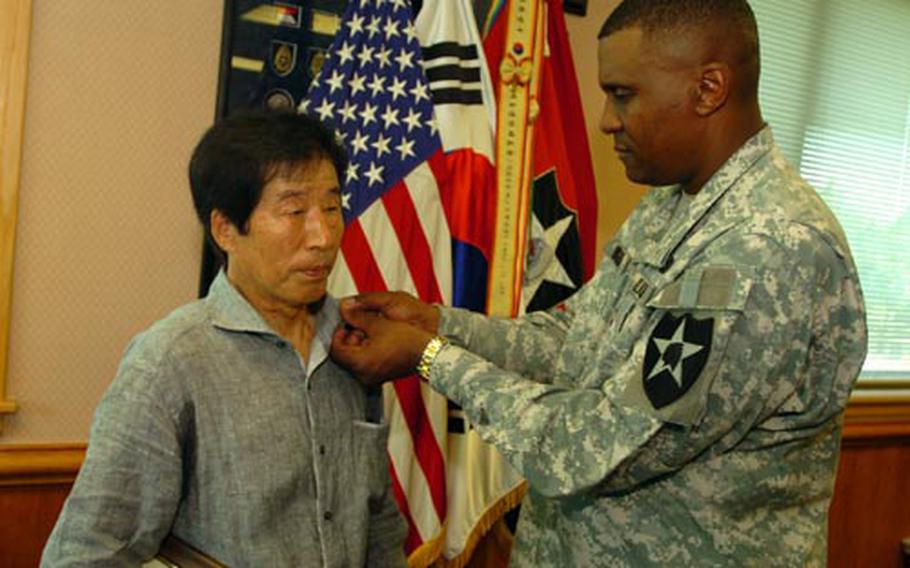 They hoped for chewing gum and chocolate. Occasionally, teenagers like Yu Hu-son would try to have a conversation with the soldiers.

"It was from the black soldiers out there that I learned to pick up a few words of English," said Yu, now 71, but still known among many by his nickname &#8212; the Rice Paddy Daddy.

Yu&#8217;s first experiences with soldiers led him to apply for a job with the military in 1958.

Last month, Yu marked 50 years of service to the U.S. Army and 45 years working for the 2nd Infantry Division at Camp Red Cloud.

"In a very quiet and unobtrusive way, he&#8217;s been able to capture the very essence of our service in the Republic of Korea," said 2nd ID commander Maj. Gen. John Morgan during a recent award ceremony held for Yu, who has served as the commander&#8217;s photographer since 1997.

Yu first worked at the I Corps headquarters service club at Camp Santa Barbara, located near what is now Rodriguez Range.

After joining the South Korean army in 1960 and serving for 29 months, he took a job at Camp Red Cloud, where he has worked ever since.

For decades, Yu taught soldiers arts and crafts, including how to make model cars and airplanes.

Yu also has judged and taught photography in Uijeongbu for 30 years, taking his students to the old downtown market and other areas full of people and activity.

However, it&#8217;s the pictures of soldiers in the field, like those prominently displayed at division headquarters and in publications like Soldiers Magazine, that have made their mark on 2nd ID&#8217;s history.

"He loves detail. He likes to get close and capture the personality of the soldiers," said Sgt. 1st Class Rhonda Lawson, who supervises soldiers working for 2nd ID&#8217;s newspaper.

"I tell soldiers to look at some of the things Mr. Yu is doing and learn from that."

After all this time, Yu says he has no intention of slowing down.