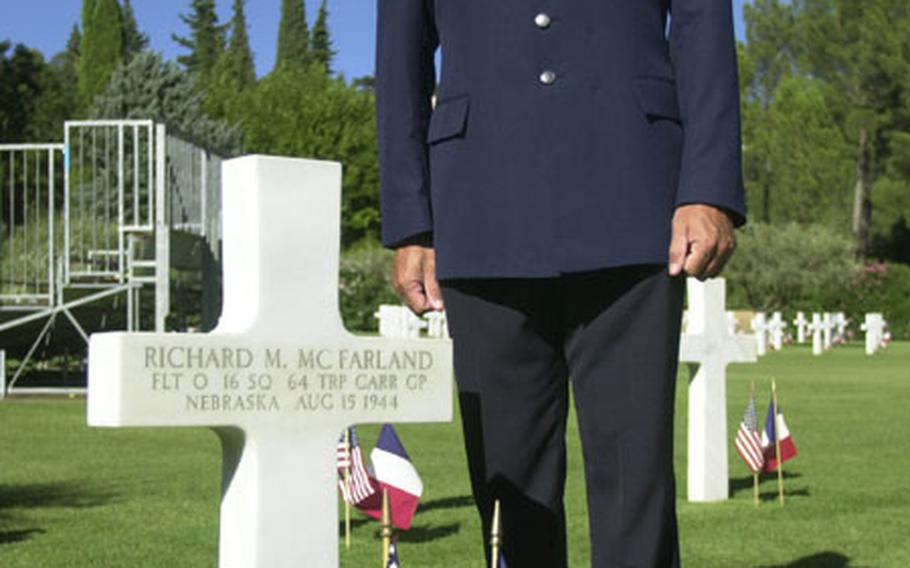 Air Force Master Sgt. David Zibell, a member of the 774th Expeditionary Air Base Group in Istres, France, stands beside his grandfather&#39;s grave at Rhone American Cemetery in Draguignan, France. About 1,500 Americans and French on Saturday evening commemorated the 60th anniversary of the Allied landing in southern France. (Scott Schonauer / S&S)

DRAGUIGNAN, France &#8212; U.S. servicemembers consider it an honor to travel to southern France and participate in Saturday&#8217;s 60th anniversary of the Battle of Provence. But the event has a special meaning to Air Force Master Sgt. David Zibell.

His grandfather, Richard McFarland, is buried at Rhone American Cemetery and Memorial, which hosted a ceremony in honor of those who participated in the historic invasion.

Zibell &#8212; attached to the Phoenix-based 161st Aerial Refueling Wing, an Air National Guard unit deployed to Istres, France &#8212; was able to see his grandfather&#8217;s grave for the third time. He first made a trip to the cemetery in 1977.

The 12-acre cemetery, 28 miles from Cannes, is on the eastern edge of the city of Draguignan on Kennedy Boulevard and is the final resting place for 861 Americans who died in the battle. White Italian marble crosses and Stars of David mark each grave, which is immaculately maintained.

His grandfather was a glider pilot and died during the landing portion of the invasion early in the battle. Zibell said he was told that his grandfather was nicknamed &#8220;Pappy&#8221; because he was 31 years old, an elder to many of the 19- and 20-year-old soldiers who served during World War II.

Zibell has had the opportunity to participate in other World War II ceremonies in France since his unit is in Istres for a 90-day deployment. At one of the ceremonies, he became friends with a local Frenchman. On Saturday, Zibell was surprised to see his new friend with a bouquet of roses for his grandfather&#8217;s grave.

While disagreements over the war in Iraq between the United States and France has strained relations between the two allies, U.S. servicemembers were surprised to find how well they were received during their visit.

The city paid for the lodging and meals for Rota, Spain-based sailors and Marines, who served as part of the ceremony&#8217;s honor guard. After Saturday evening&#8217;s ceremony, when the group went to a special, outdoor dinner in the middle of the city, the residents gave them a friendly ovation.