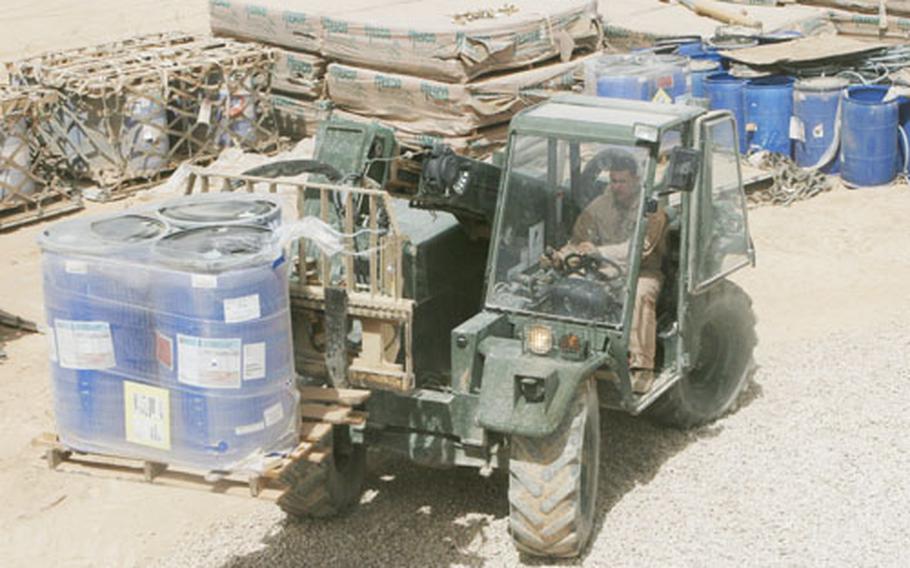 AL ASAD AIR BASE, Iraq &#8212; Marines in Anbar province are up against more than insurgents. They have another potentially deadly "enemy" that can&#8217;t be killed, only contained.

They call it "moon dust," a baby powder-fine sand that can cause havoc when helicopters land.

Rotor backwash can kick up so much of the dust that it causes a brownout, obscuring the landing.

Upon their arrival from Okinawa to Al Asad Air Base in the spring, Marine Wing Support Squadron 172&#8217;s combat engineers were charged with managing the hazard at the temporary landing pads the squadron is building throughout Anbar.

The task was a first for the air support squadron, said 1st Lt. Emma Frowine, commander of the squadron&#8217;s Engineer Operations Company. Dust abatement is something normally done by ground support crews, she added.

Rhino Snot, the nickname for Envirotac II, is a glue-like substance used to harden the earth.

Troops first used it at a base in Yuma, Ariz., in the late 1990s. In 2002, it was put into use at Camp Rhino in Afghanistan, according to manufacturer Environmental Products & Applicacations Inc.&#8217;s Web site. At Camp Rhino, Marines started calling the goo "rhino snot," a moniker the company trademarked.

The material eventually breaks apart and is environmentally friendly, but it has taken some experimentation for her troops to put it to best use, Frowine said.

After scraping off as much dust as possible and leveling the landing surface, troops wet it with water and compact it so it won&#8217;t buckle under the weight of landing aircraft.

Gravel is then spread over the area and everything is compacted again. The next step is to spray on three or four layers of Rhino Snot.

Said Sgt. William Weatherspoon: "Whatever it touches, it destroys. It&#8217;s like worse than super glue. You really need to wear two layers of clothing or it will soak through to the skin."

And that&#8217;s when the situation can get really sticky.

"You have to scrape and rub to get it off your hands," Weatherspoon said. "It&#8217;s really fun when it gets into your hair because then you have to cut your hair."

It&#8217;s also hard on equipment, he said, so certain vehicles are used only for spraying the substance.

But it gets the job done.

"It works great" for building helo pads and combating the dust, Weatherspoon said.