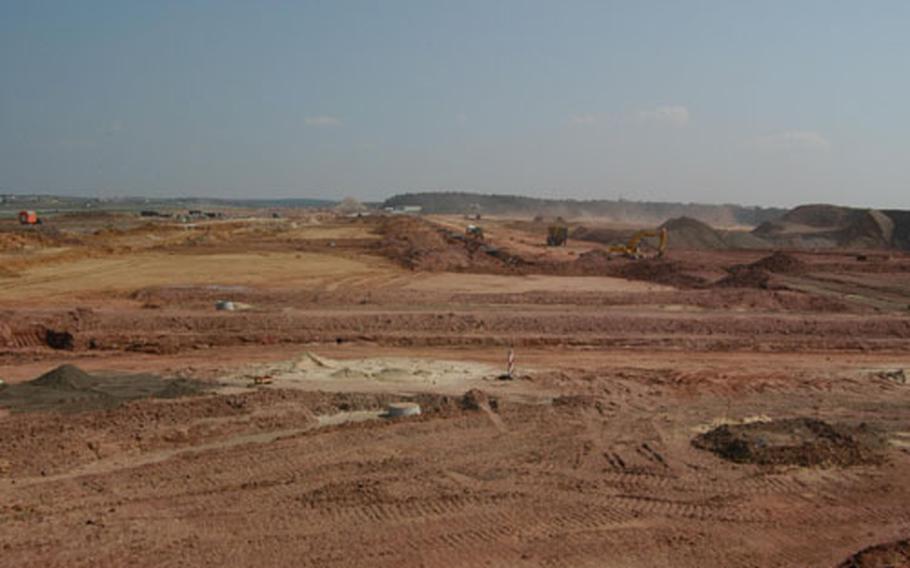 Workers are building parking spots for 11 wide-body aircraft, along with a new refueling system, at Spangdahlem Air Base, Germany. By the end of 2005, all aircraft operations will move from Rhein-Main Air Base to Spangdahlem and Ramstein. (Marni McEntee / S&S)

Workers are building parking spots for 11 wide-body aircraft, along with a new refueling system, at Spangdahlem Air Base, Germany. By the end of 2005, all aircraft operations will move from Rhein-Main Air Base to Spangdahlem and Ramstein. (Marni McEntee / S&S) Pete Neukom, chief of Spangdahlem&#39;s Rhein-Main Transition Program, stands near a new 3.5-million gallon fuel storage tank at the air base. By the end of 2005, all military aircraft operations will move from Rhein-Main Air Base to Spangdahlem and Ramstein. (Marni McEntee / S&S) 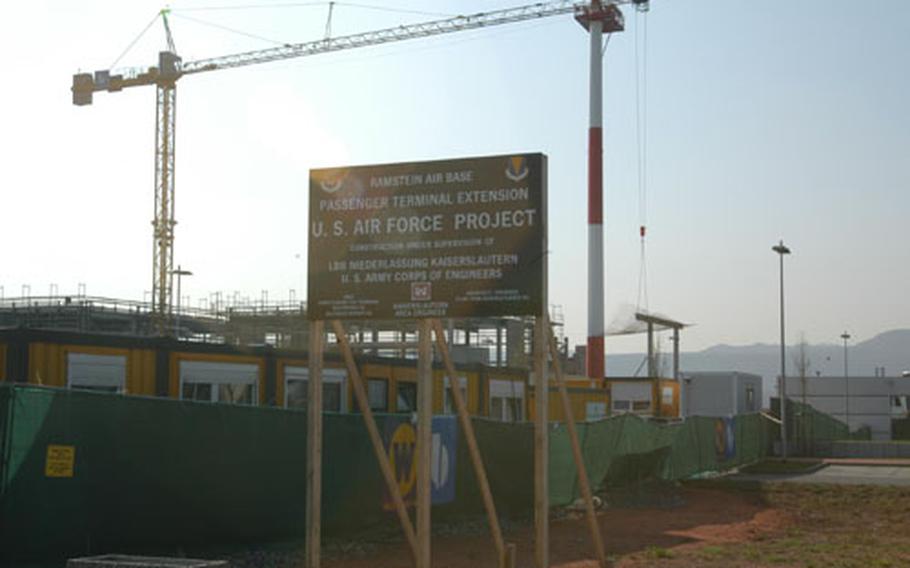 Construction girders rise above the flight line at Ramstein Air Base, Germany, where a passenger terminal annex is being built. The annex and other projects on Ramstein must be complete by the end of 2005, when Rhein-Main Air Base near Frankfurt closes. (Marni McEntee / S&S) Pete Neukom, chief of Spangdahlem Air Base&#39;s Rhein-Main Transition Program, shows the map location of a massive aircraft parking ramp under construction at the base. By the end of 2005, all military aircraft operations will move from Rhein-Main Air Base near Frankfurt to Spangdahlem and Ramstein. (Marni McEntee / S&S)

SPANGDAHLEM AIR BASE, Germany &#8212; The south side of Spangdahlem&#8217;s flight line looks like a dump truck autobahn these days.

Tons of dirt are being moved to prepare the site of a massive parking ramp big enough for 11 Air Force C-5s, the largest plane in the inventory. Last week, some 38 trucks were making three trips an hour hauling materials to the construction zone.

The ramp is one of dozens of projects kicking up dust at Spangdahlem and Ramstein Air Base as the two facilities prepare to take over operations from Rhein-Main Air Base next year, when the base near Frankfurt will revert to the Frankfurt Airport.

Work is likely to hit a feverish pitch over the coming months, since most operations will transfer to the two new locations by October 2005, said Pete Neukom, chief of the Rhein-Main Transition Program for Spangdahlem.

In all, 46 projects worth 500 million euros ($609 million) must be finished by December 31, 2005 &#8212; the official end date of operations at Rhein-Main. The German federal and state governments, Frankfurt city and the Frankfurt airport are paying for most of the construction. NATO and the U.S. military are paying roughly 120 million euros &#8212; about $146 million.

Twenty-seven of the Rhein-Main Transition Program projects are at Spangdahlem. The ramp is by far the most visible, stretching over a 120-acre lot that was once home to small German farms. The project includes a new refueling system, which will cut the time of refueling a cargo aircraft from two hours to 30 minutes.

That will help Spangdahlem, now home to three fighter squadrons, live up to its billing as a &#8220;great gas-and-go facility,&#8221; for cargo operations, Neukom said. In addition, new transient and contingency dorms, a new instrument landing system and hot-cargo pads for weapons-laden aircraft will be built.

At Ramstein, construction projects already dot the landscape, and many are part of the transition. The one that catches most people&#8217;s eyes is a new cargo loading facility located near the base&#8217;s west gate. Construction also is under way on an annex to the modern-glass passenger terminal. The annex is scheduled for completion in October 2005, said Thomas Schnee, chief of the Rhein-Main Transition Program at Ramstein.

When the transfer is complete, about 125 Air Force members will move from Rhein-Main to Spangdahlem and at least 100 will move to Ramstein.

During major contingency operations, however, that number is likely to increase. Ramstein spokeswoman Darlene Cowsert said she could not &#8220;speculate on the increase for a contingency surge because that would be determined by the contingency requirements at the time.&#8221;

With the warm months of summer approaching, Ramstein is seeing more truck traffic as well, Cowsert said. Between April 5 and 9, for example, 3,570 trucks carrying transition program construction material entered the base. That&#8217;s up from 2,200 trucks between March 22 and 26. That means more large-vehicle inspection facilities have to be built, Schnee said.