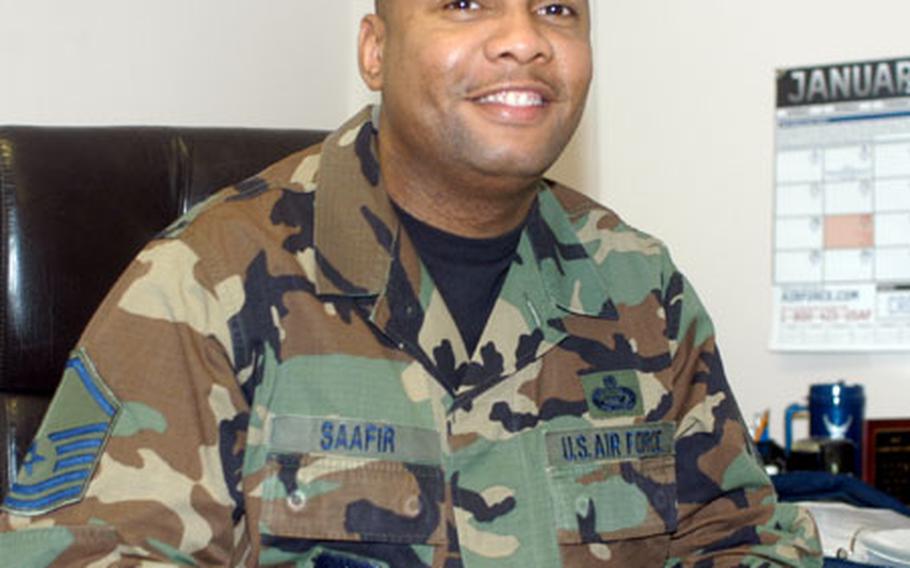 RHEIN-MAIN AIR BASE, Germany &#8212; A 469th Air Base Group noncommissioned officer beat out 76 other unit managers to be named U.S. Air Forces in Europe personnel manager of the year.

Master Sgt. Rahim Saafir, who serves as the group&#8217;s mission support flight superintendent, manages more than 250 active-duty personnel and 350 civilians. In 2003 he saved the Air Force more than $15,000 in travel costs by having enlisted promotion tests held on Rhein-Main instead of having airmen travel to the usual testing site at Ramstein Air Base, Germany, nearly two hours away.

&#8220;He definitely deserves this award. He never leaves the office,&#8221; said Tech. Sgt. Eric Cone, noncommissioned officer in charge of information management who has worked with Saafir for seven months. &#8220;He&#8217;s here at the crack of dawn and doesn&#8217;t leave until after the sun goes down.&#8221;

Though junior staffers claim Saafir has no life outside of work, the 17-year Air Force sergeant speaks for the International Toastmasters Communication and Leadership Program out of Wiesbaden, Germany, during his spare time. Saafir also serves as an African American Heritage Committee member and is a Student Advisory Committee member for Gen. H.H. Arnold High School in Wiesbaden.