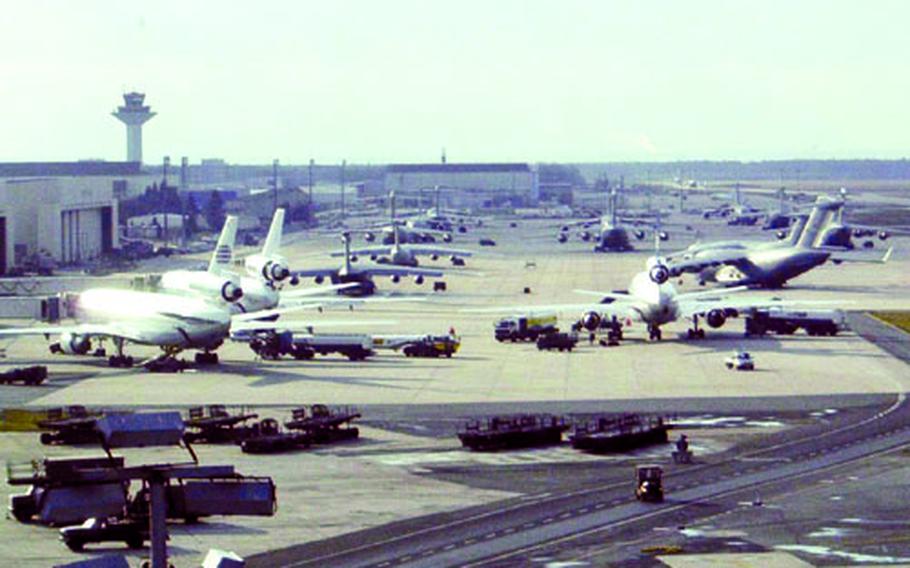 Rhein-Main Air Base sports a "full ramp" in February 2003, as every parking spot on the tarmac is filled. (Courtesy of USAF)

RHEIN-MAIN AIR BASE, Germany &#8212; The 26.2 miles required to complete a marathon is nothing compared to the two-year sprint going on the runways at Rhein-Main Air Base.

726th Air Mobility Squadron members have been working for more than 60 hours a week for the last two years in support of Operations Iraqi Freedom and Enduring Freedom.

Now, with barely enough time to stop and catch their breath, they&#8217;ve been named the Air Mobility Command&#8217;s top squadron for the past year, beating out the other seven European squadrons and seven Pacific squadrons.

The Maintenance Effectiveness Award for 2003 was given to the squadron for supporting more than 5,800 airlift missions for the two operations. Some 84,000 tons of cargo and more than 420,000 combat troops went through the base last year.

Missions included initial troop and equipment drop off and continuous reloading of equipment and supplies, as well as complete maintenance checks and repairs. On average, aircraft have been ready for departure in no more than three hours and 15 minutes.

All in all, flights are getting out faster and better than ever before, according to Lt. Col. Mike A. Polhemus, commander of the 726th AMS.

Squadron leaders say this is because they are capitalizing on all resources available.

They say without the help of civilian contractors at the Frankfurt international airport, the large number of stateside active-duty and Reserve augmentees, and the entire Rhein-Main community, the marathon they&#8217;ve been running could not go on.

Though Rhein-Main is going to be returned to German authorities in 2005, squadron members said things are not slowing down.