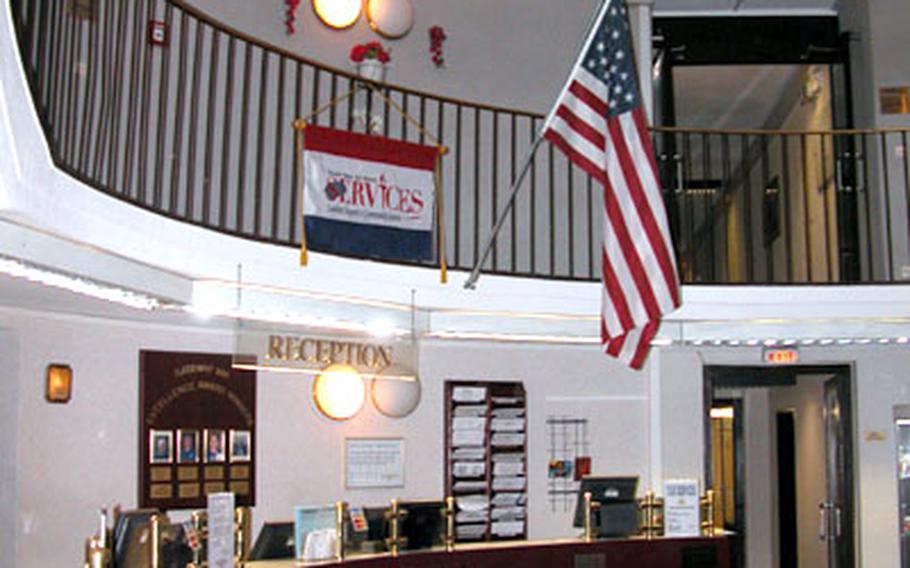 The lobby of the Gateway Inn. (Jessica Inigo / S&S)

RHEIN-MAIN AIR BASE, Germany &#8212; The Gateway Inn, the military guesthouse in the family housing area at Rhein-Main Air Base, gave its last guest a late checkout Friday, and then hung up its final do not disturb sign.

The highly recognized inn closed its doors with more than 80 guests filling its rooms for the last time.

Now, guests on extended temporary duty, traveling through Germany on orders to more exotic locations, or taking advantage of the space-available program, will have to find an alternate place to crash. More than 30,000 people traversed through the passenger terminal last month, base officials estimated.

However, missions at the soon-to-be closed base already are slowing down, said Capt. Matthew Orlowsky, the 469th Air Base Group Services deputy director.

Much of the military&#8217;s air traffic is being pushed through to Ramstein or Spangdahlem air bases in Germany, or through Incirlik, Turkey.

To recognize the last full day of operations at the inn, staff members were treated to a picnic where awards were handed out.

Johnnie Bennett, the general manager, gave all 32 staff members either a certificate or an award to show appreciation for their work over the years.

Of the employees, 21 are civilian. These workers were offered alternate jobs at the Hanau, Germany, guesthouse, about a 20-minute drive from the air base.

The military workers were assigned to other services positions on base.

Bennett, who has worked at the inn for the past five years, said some his best memories there included a time when a large group of FBI agents used the inn as their European hub when traveling to the Middle East, or when Sen. Joseph R. Biden Jr., D-Del., visited.

One of the last guests to stay at the inn said that his flight plans worked out perfectly with the closing.

Air Force Staff Sgt. Ernie Argarin, who called his room at the inn his home for the past three months, had a flight out to his home base of Fairchild Air Force Base, Wash., on Friday morning.

The Gateway Inn moved to its current location in the housing area in 1995. In 2003, it was named the best small inn for U.S. Air Forces in Europe.