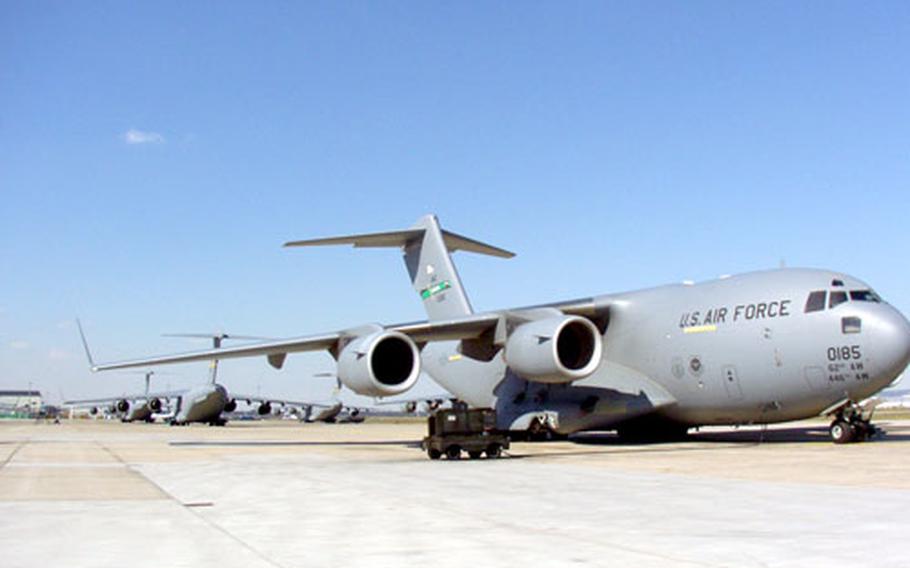 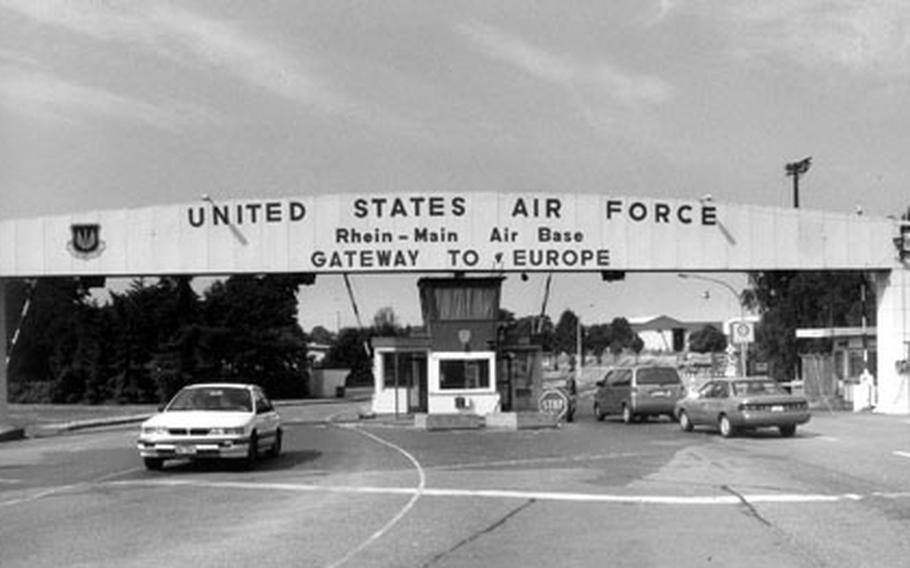 Buy Photo
For generations of American servicemembers and their families, Rhein-Main Air Base, Germany, was their first glimpse of the continent, thus it was known as the “Gateway to Europe.” The sign and gate were taken down after a portion of the base was returned to the German government. (Michael Abrams/Stars and Stripes) The Berlin Airlift put it on the front lines of the Cold War at first frost.

That alone assured Rhein-Main Air Base a place in history. But the old airfield once used by the Germans to launch zeppelins came to symbolize a bridge of a different sort.

For half a century afterwards, generations of U.S. servicemembers stole their first glimpse of Europe from the seat of an airliner bound for Rhein-Main. &#8220;The Gateway to Europe,&#8221; as it came to be known, was the portal from which millions of Americans transited in and out of theater.

On Monday, German and Americans will converge on Rhein-Main one last time to say goodbye to the place. The list of invited dignitaries includes senior-ranking U.S. military officials, German politicians and several folks of notoriety, from the &#8220;Candy Bomber,&#8221; Gail Halvorsen, to longtime air base employee Rolf &#8220;Tex&#8221; Klein.

Several days ago, the last scheduled U.S. military flight touched down. Ten years in the making, the closure of Rhein-Main is essentially complete. All that&#8217;s left is the final pack out and the return of some keys.

&#8220;It&#8217;s been a large piece of the American experience on this continent. Rhein-Main helped tie these two continents together.&#8221;

&#8220;Rhein-Main became a symbol of friendship,&#8221; Klein said, alluding to the Berlin Airlift, the massive humanitarian mission of

The return of Rhein-Main to Germany has been on the table since 1992, when the German government asked USAFE if it could give up 150 acres for a large air cargo complex. The United States was receptive to the idea because it had been thinking of scaling back its presence at Rhein-Main as part of a broader plan to reduce forces in Europe.

That led to further talks that resulted in a 1999 agreement for a complete withdrawal. Frankfurt Airport authorities and U.S., German and NATO officials hammered out a deal to close Rhein-Main in exchange for roughly half a billion dollars in upgrades to Ramstein and Spangdahlem air bases.

The official return date was set for Dec. 31, 2005. At the time, Harrington said, it seemed so far into the future that it was easy for someone like him, who is not assigned to the base, to sort of forget about the closure.

Perhaps that&#8217;s partly because Rhein-Main continued to serve as a vital transportation hub for U.S. military operations in Kosovo, Bosnia and Herzegovina, and later, Afghanistan and Iraq. Even up to the end, when the moving trucks were pulling up to apartments in Gateway Gardens, flights into and out of Southwest Asia continued to use Rhein-Main.

Traute Grier understands why the U.S. military is leaving, but it still makes her heart ache.

Grier was one of the many children on the receiving end of the Berlin Airlift. She later married a U.S. servicemember and, like many other dependents, passed through Rhein-Main en route to one place or another.

By the 1980s, Rhein-Main had the largest cargo and passenger operation in the U.S. military, handling about a million passengers a year.

John Provan, a historian at Frankfurt International Airport, said work would soon begin on the new passenger terminal, destined for the Rhein- Main site. When the terminal opens in about six years, the only recognizable feature will probably be the Berlin Airlift Memorial.

While the Berlin Airlift was the stuff of legend, Provan said it was just one of an estimated 170 humanitarian operations staged out of Rhein-Main. The missions took airmen from Iceland to Italy to Iraq.

Grier, who will be in attendance Monday, hopes that future generations will take the time to learn why Rhein-Main was so important in the second half of the 20th century. Germans and Americans, she said, worked side by side to rebuild a nation and ease the sufferings of people throughout the hemisphere.