Rhein-Main residents given tour of future home at Spangdahlem 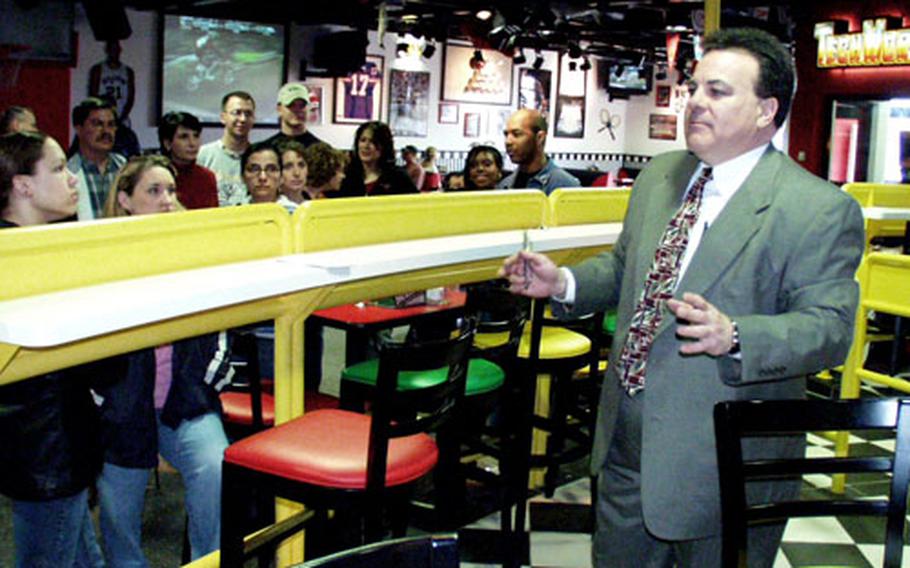 Robyn Sleeth, deputy service commander at Spangdahlem Air Base, gives airmen from Rhein-Main Air Base and their families a tour of JR Rockers at Spangdahlem on Friday. Members of the 726 Air Mobility Squadron will move to Spangdahlem when Rhein-Main closes later this year. (Scott Schonauer / S&S)

SPANGDAHLEM AIR BASE, Germany &#8212; In the eyes of the Air Force families on the tour bus, the F-16 fighter jets landed at the perfect moment.

As the fighters roared overhead and rattled the parked bus, the group cheered the impromptu flyover.

She and the others aboard the bus will soon hear that familiar jet howl daily. Members of the 726th Air Mobility Squadron and their families will move to this fighter base in southwestern Germany once Rhein-Main Air Base closes later this year.

On Friday, the Air Force bused some of the nearly 500 Americans from the base near Frankfurt to Spangdahlem to give them an orientation of their soon-to-be address. It was a chance for spouses to ask questions about job opportunities on base, for airmen to see how far along their new offices are coming, and for parents to check out the base schools. The trip also gave families a chance to scope out the housing area and see where they will be living.

Although families will only be moving about 115 miles west, they will be going from being near one of Germany&#8217;s largest cities to a quiet, rural area known for its pretty villages and famous wines.

That could be a major adjustment for those who love the advantages of living near a bustling city. But O&#8217;Dell said she and her husband, a technical sergeant who now repairs large cargo planes, are looking forward to moving to the rural base with their two teen-age boys.

Airman William Mangin and his wife, Ashley, are also excited about going to a base in the midst of a building boom. Earlier this year, the base opened a new consolidated club that includes a sports bar and gift shop. The couple has been at Rhein-Main for seven months.

The U.S. government will hand over Rhein-Main to Germany in December. It is part of a deal that will allow for the expansion of Frankfurt international airport, which currently shares the runway with the U.S. base. As part of the agreement, most of the U.S. military air traffic will go through Ramstein Air Base. Spangdahlem will handle any overflow.

While the handover won&#8217;t happen until the end of the year, most of the squadron will move west before the last cargo plane lands at Rhein-Main. Just as they did in Frankfurt, the 726th will support cargo and passenger traffic at its new base.

Carole Beasley, the lead community readiness consultant for the Spangdahlem Family Support Center, said the squadron&#8217;s move should go smoothly because the families will be going through the process together.