Rhein-Main had humanitarian side, too 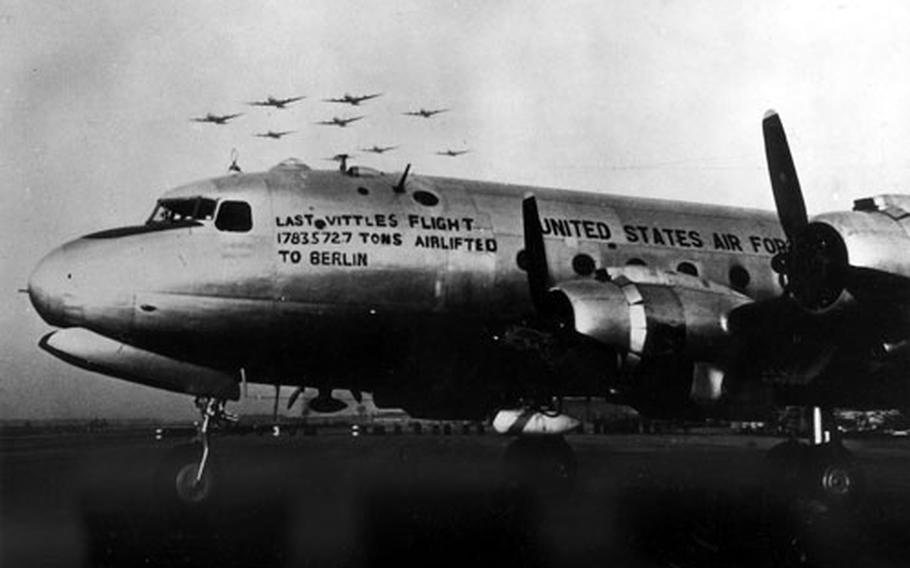 The last Vittles flight to Berlin left Rhein-Main Air Base on Sept. 30, 1949. Figures on the side represent the total tonnage airlifted by U.S. airplanes. Sister ships flew in formation to mark the end of a dramatic chapter in air history, the Berlin Airlift. (U.S. Air Force)

The last Vittles flight to Berlin left Rhein-Main Air Base on Sept. 30, 1949. Figures on the side represent the total tonnage airlifted by U.S. airplanes. Sister ships flew in formation to mark the end of a dramatic chapter in air history, the Berlin Airlift. (U.S. Air Force) 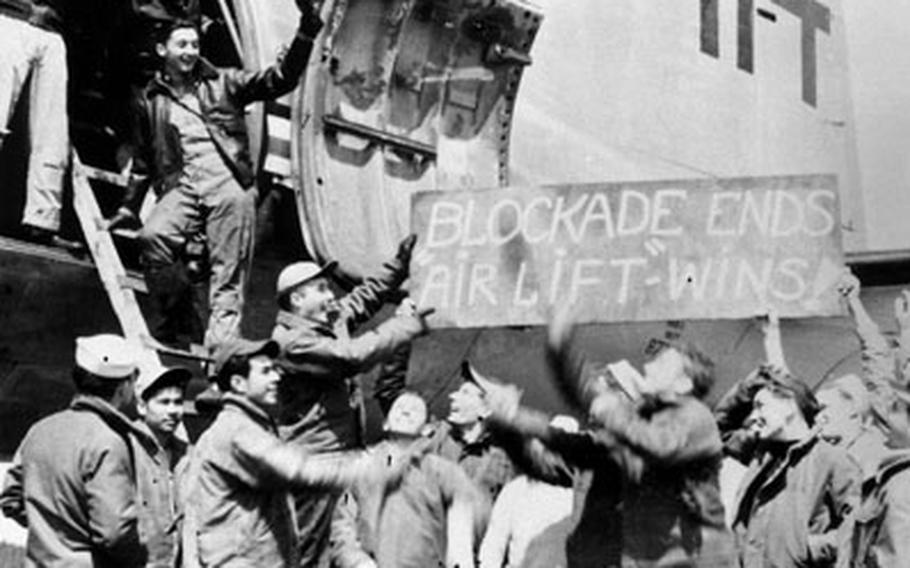 Buy Photo
U.S. Navy Squadron VR-6 is greeted at Rhein-Main Air Base on its arrival on May 12, 1949. The sign reads “Blockade ends airlift wins.” (Stars and Stripes) 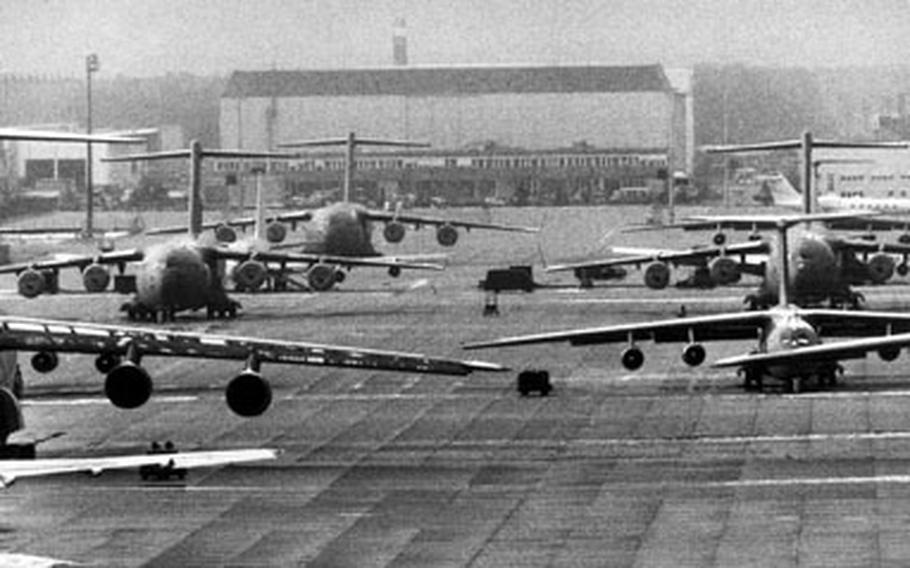 Buy Photo
U.S. Air Force aircraft sit on the tarmac at Rhein-Main Air Base, Germany, in November 1996. They were standing by for a humanitarian airlift to Africa. From the Berlin Airlift in 1948 to its final years as an air base, Rhein-Main was involved in humanitarian missions. (Stars and Stripes)

There&#8217;s good reason why the other half of the Berlin Airlift Memorial landed at Rhein-Main Air Base.

While nine bases in West Germany were used as staging points to bypass the Soviet Union&#8217;s blockade of Berlin, the airfield near the confluence of the Rhein and Main rivers was easily the busiest. One of out every four flights originated from Rhein-Main, accounting for a third of all goods flown into the besieged city from June 1948 to September 1949.

&#8220;It far and away lifted more supplies to Berlin than any other single base,&#8221; said Dan Harrington, a historian for U.S. Air Forces in Europe.

In every sense of the word, the Berlin Airlift was truly a monumental effort by American, British and French forces. Over the 15-month period, the allies flew 278,000 missions, delivering 2.3 million tons of food and coal to three airfields in the western sectors of Berlin.

Wiesbaden Air Base, where the airlift began, played a major role in the effort, but it was Rhein-Main that carried the load.

The U.S.-led operation, which, at its peak had planes departing for Berlin every three minutes, highlighted the allies&#8217; strength, resolve and ingenuity. It also showed how committed they were to West Germany, especially Berlin.

The airlift arose in response to the Soviet&#8217;s land and water blockade of the city, triggered by Moscow&#8217;s displeasure with a currency reform initiative in West Berlin, though there were other points of contention.

Situated deep inside the Soviet zone of occupation, Berlin had been jointly ruled for three years by the Allies that conquered Germany in World War II. The Soviets controlled East Berlin, while the Americans, British and French collectively ran West Berlin.

The crisis unfolded as the United States was steadily withdrawing its forces from Europe. Essentially, the Berlin blockade and the U.S. response to it &#8212; the deployment of planes and personnel &#8212; constituted the opening salvo of the Cold War. And Rhein-Main was on the front lines from the get-go.

In the years since there have been other airlifts, most recently Operation Provide Promise, which provided aid to Bosnia and Herzegovina. From July 1992 to January 1996, Rhein-Main&#8217;s fleet of C-130 keyed the longest sustained humanitarian airlift in history.

Still, when historians and old timers talk about Rhein-Main, invariably the Berlin Airlift comes to mind.

In tribute to the 70 servicemembers from the United States and Britain who died in the effort, the Berlin Airlift Memorial and a replica of it erected at Rhein-Main were dedicated in 1985.

The U.S. Air Force base may be closing, but the airlift memorial and its vintage aircraft will remain as a lasting reminder of the role Rhein-Main played in saving Berlin and, ultimately, uniting a country.