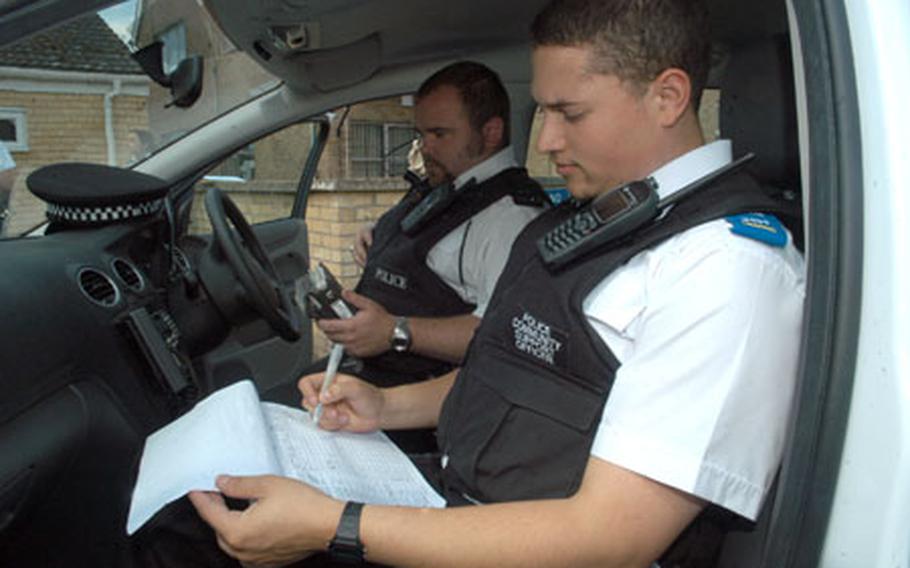 The one-hour meeting on June 26 highlighted off-base theft from vehicles belonging to Air Force personnel. Similar meetings will be held regularly in an effort to combat crime against airmen residing in areas around RAFs Lakenheath and Mildenhall.

As of June 21, Air Force personnel have been victimized in 53 of 138 thefts from vehicles reported this year within the communities of Brandon, Lakenheath, Mildenhall, Beck Row, West Row and Holywell Row.

The Lakenheath Safer Neighborhood Team, created recently as part of a Suffolk Constabulary-wide initiative to increase police presence on the streets, met with the 48th Security Forces Squadron and Ministry of Defense police during the meeting to discuss ideas on how to stop the current rise of theft against airmen.

&#8220;We&#8217;re pretty much trying to find a way we can minimize it. We just need to keep getting the word out,&#8221; Staff Sgt. Alberto Castillo, RAF Lakenheath&#8217;s crime prevention officer, said after the closed-door meeting.

Within the next two months, British police and security forces will conduct at least eight joint patrols in high-theft areas. Leaflets with safety tips will be placed on vehicles or given to owners of vehicles with security violations, such as unlocked doors and visible valuables.

The first of the joint patrols occurred June 27 in West Row, however, there was limited participation due to inclement weather.

Constable Lisa Yorke, a Lakenheath neighborhood team member, braved the downpour to notify a few airmen of their vehicles&#8217; lack of security.

Yorke admitted that Americans account for most of the security violations she sees in the area.

In a few months, the Lakenheath neighborhood team will join up with the Ministry of Defense to hold follow-up security briefings one month after newcomers receive their initial briefing, which unloads an array of general information on newcomers.

The joint meetings are still in the early stages, yet Waller is optimistic about the team&#8217;s extra assistance from base authorities.

Anyone who wants to keep tabs on prominent crime in the area can register on Suffolk&#8217;s Neighbourhood Watch program online. Once registered, residents receive via e-mail the latest newsletters on crime in their areas.

Another helpful British online service is Police Direct, which provides crime updates, messages and security alerts to your e-mail, cell or landline phone. Registration is simple and can be done at: http://policedirect.suffolk.police.uk.

Remove your pink (base registration) card from your window when you leave base and store it in a safe location. Also, remove military gear and equipment from your vehicle.

Do not leave valuables in plain view. If you have a removable stereo faceplate, remove it and hide it. Also, remove satellite navigation devices and holders from vehicles.

Park in open, well-lit and populated areas near your destination. Avoid parking near trucks, trash bins and other objects that can obstruct visibility and provide hiding places.

Turn off your engine, roll up all windows, lock all doors and take your keys with you when making even a quick stop at a store, gas station or even in your driveway.