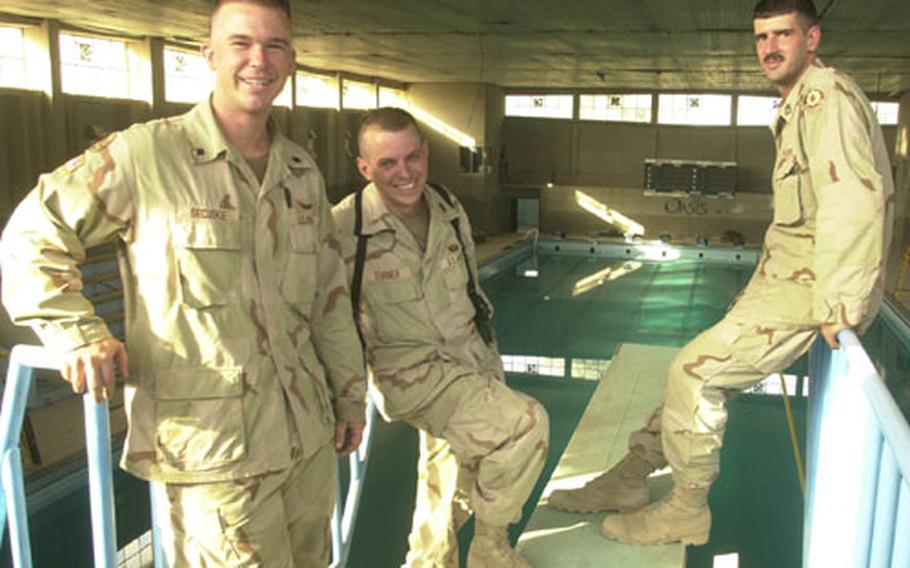 The work took weeks, and the facility is still not 100 percent, but Spc. Bengie Secuskie, left, Chief Warrant Officer 2 Jeff Turner, center, and Sgt. 1st Class Michael P. Riley were part of the group of 4th Squadron, 2nd Armored Cavalry Regiment soldiers who pitched in to clean and repair an Olympic-size indoor pool at Muleskinner Base. The three expect the pool to meet Army regulations by the first of next month. They invite all U.S. soldiers to come use the facility. (Terry Boyd / S&S)

That tiny fact aside, the Sept. 14 party had &#8217;80s rock, hip-hop jam and country music, food and sodas. About 400 of their closest friends from the 4th Squadron, 2nd Armored Cavalry Regiment came by for a swim.

It was a victory party, the culmination of weeks and weeks of nonstop, frustrating, up-to-your- knees-in-slime-and-trash labors.

It all started when Stetson Troop commander Capt. Paul E. Johnson came to Riley and said, &#8220;Hey, I got a project for you if you want to tackle it.&#8221;

Great, thought the troop. A swimming pool! Until they looked at it. True, it was an Olympic-size pool in a multimillion dollar indoor facility. The facility was part of what had been an Iraqi air force school on Al-Rasheed air base, now Camp Muleskinner, brigade headquarters for the 2nd ACR out of Fort Polk, La.

But the facility had been abandoned after the first Gulf War in 1991, deteriorating into a garbage-filled ruin. The pool itself was a trash dump, full of everything from lockers, desks and chairs to old Iraqi body armor, said Chief Warrant Officer 2 Jeff Turner.

Dreaming of an oasis in the desert, Secuskie, Turner, Riley and others from Stetson Troop, an aviation maintenance unit, were undeterred, embarking July 1 on a complete overhaul.

What followed was more than 45 days of backbreaking work. Grimy trash removal relieved only by the knuckle-busting, frustrating work of trying to figure out a system of pumps and valves.

They spent more weeks on the electrical system, trying to figure out how &#8212; or if &#8212; it worked. The harder they worked, the less went right.

&#8220;We were shaking our heads at each disaster,&#8221; Turner. When they finally got to the point they felt they could start filling the pool, the filter system didn&#8217;t work and the water went green, Secuskie said.

As they pumped out the green water and tried again to fill it, 800 gallons of water promptly drained into the pump room, shutting down the whole effort until it could be siphoned out.

It was one nightmare after another, trying to get the pool to meet tough Army regulations, Riley and Turner said.

As the work went on, it became the camp obsession.

Finally, they recruited some outside help from the owner of a local swimming pool contractor.

Once they knew it was going to work, Riley, who is lifesaver qualified, and others worked nights training more lifeguards.

Finally, the day came when they finally got all 800,000 gallons to stay in, putting in the chemicals the Saturday night before the big party.

Riley, Turner and Secuskie emphasized that the pool is blessed by V Corps and open to all units. Soldiers have already visited from Baghdad bases, and as far away as Babylon, two hours to the south.

Now, if they can just keep it open.

Still sorting out multiple pump problems, with new pumps waiting to be installed, the crew hopes to be back in business by Wednesday.

Until then, the pool remains the biggest topic on base, Secuskie said.