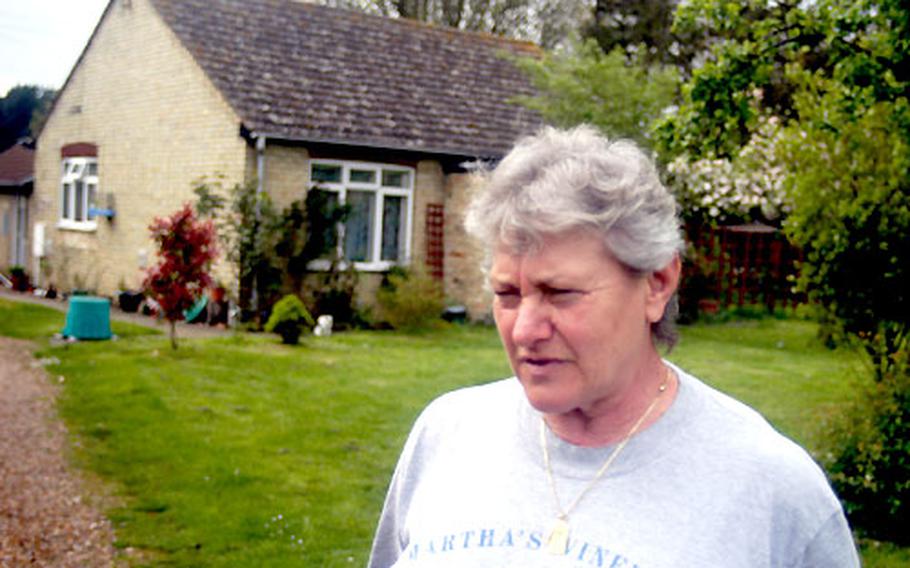 Mary Schmedeman has rented a home on Waterworks Road since before Sept. 11, 2001. The public road to her house on Waterworks Road was shut off for security reasons by the British Ministry of Defence. The home is now technically on RAF Mildenhall, England, and Schmedeman is now waiting to be moved to a different house. (Ron Jensen / S&S)

But a new gate that was to serve as the base&#8217;s main entrance will become an additional exit, a base official said, somewhat easing traffic problems created in the wake of the terrorist attacks in America on Sept. 11.

Squadron Leader James Savage, the liaison between the base and the Ministry of Defence, which owns the base, said the change could happen in a few months.

The road system in Beck Row, home of the base, was a security problem as America and the world reeled from the attacks on the World Trade Center and the Pentagon. Waterworks Road, a one-block dead-end street, extends into the base. It and Lincoln Road, which becomes Waterworks Road for the final block, effectively split the base in two.

On one side, to put it simply, are the commissary, base exchange, dormitories, bank and the like. On the other are the flight line and the attending unit offices. Before Sept. 11, traffic crossed Lincoln Road going from one side to the other.

But that changed almost before the dust settled in America. An MOD police checkpoint was set up on Lincoln Road, closing it off to public traffic and making residents of the seven houses on Waterworks Road residents of the base, as well.

&#8220;The decision to close was made by the MOD, at the request of the Americans,&#8221; said an MOD spokeswoman last week.

Since then, the ministry has been negotiating with the Waterworks Road residents. Savage said the houses now have been purchased by the MOD and residents have been compensated for moves. Savage did not want to discuss details as some negotiations are not final.

In addition, Mickey&#8217;s, a restaurant sitting since 1951 where Lincoln Road becomes Waterworks Road, will remain open, but its clientele will only be base personnel, Savage said. It will be cut off from its British customers.

Mary Schmedeman, 60, who moved to 8 Waterworks Road with her adult son barely one year before the attacks, said she learned of the additional security when she walked up Lincoln Road and bumped into the checkpoint, where a uniformed woman asked for her identification.

For Schmedeman, the effort to either remain in her rental home or get a good deal for a different one involved letters to base commanders and even British Prime Minister Tony Blair.

She gained a reputation for being difficult, unwilling to meekly give in to the first offer or even the second or third. However, she now is willing to be moved as soon as housing is available.

But during all of that, traffic going onto the base has been routed down A1101 to a &#8220;temporary&#8221; gate away from the heart of the base. After entry, vehicles must meander slowly along the base roads.

Savage said that won&#8217;t change with the permanent closure of Waterworks Road and that portion of Lincoln Road now behind the checkpoint, marked by the parking lot of a pub called Bird in Hand.

The new gate, under construction when the attacks occurred, along with a visitor center, will not be used as an entry point.

But all four gates along Lincoln Road will be open, meaning traffic can move from one side to the other through the newest gate. This will also ease some of the traffic jam that grows each day at closing as vehicles make a beeline toward the only exit from the center of the base.