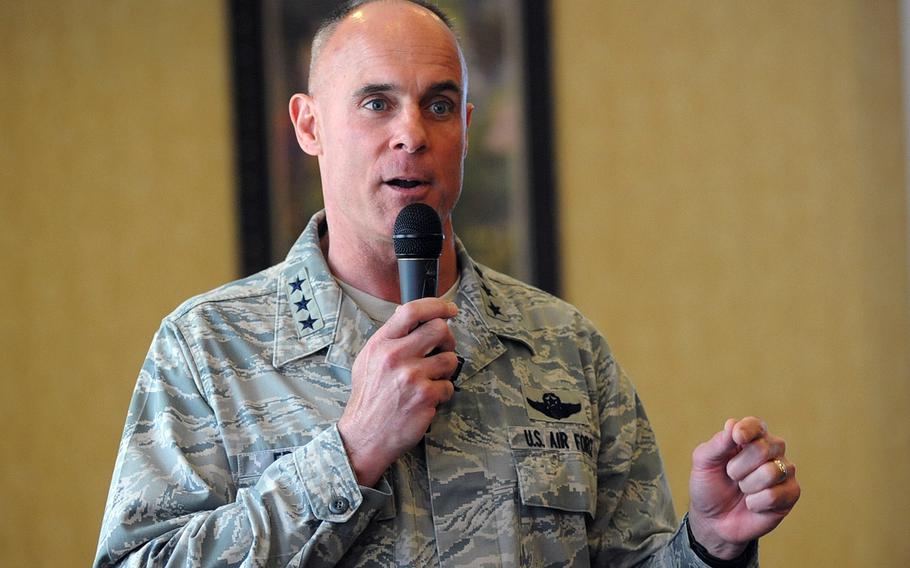 It was a decision that sparked public outrage, rocked the Air Force and may still bring groundbreaking changes — courtesy of Congress — to how the military prosecutes sex crimes.

In February, Air Force Lt. Gen. Craig Franklin dismissed a guilty verdict and one-year prison sentence and service dismissal for Lt. Col. James Wilkerson, a former inspector general and F-16 pilot at Aviano Air Base, Italy. Wilkerson was accused of groping a woman as she slept in a guest bedroom at his home after a party. The formal charge was aggravated sexual assault.

Wilkerson was immediately freed from a South Carolina brig, reinstated in the Air Force and reassigned to a base in Arizona. Franklin also recommended Wilkerson for promotion. None of the decisions were subject to being reviewed or overturned, nor was Franklin required to explain his reasoning, although he released a statement that said the case was unproven and cited testimony from Wilkerson’s supporters.

The case did not end there.

The woman, Kimberly Hanks, a civilian physician’s assistant at the Aviano base, went public with her story after Wilkerson’s charges were dismissed. That led to a public outcry from victim’s advocacy groups who decried the fact that military commanders had such authority.

Greg Jacob, policy director of the Service Women’s Action Network and a former Marine infantry officer, was among many who said they were stunned by Franklin’s decision.

“It’s atrocious. It’s infuriating,” he said. “It’s a perfect example of the due process system being overridden just at the whim of the commander. It’s a real travesty of justice… If there’s a sexual assault in this guy’s unit after he shows up, do you think anyone’s going to report it?”

Defense Secretary Chuck Hagel, under fire and only a few weeks into his tenure at the Pentagon, ordered a review of the whole military justice system and eventually agreed to reforms. As part of those reforms, Hagel agreed to ban commanders such as Franklin from unilaterally overturning convictions.

Then Congress got involved. Hearings were held and legislation proposed in both the House and Senate to reform the military system. Several senators asked for Franklin’s dismissal from the Air Force. Sen. Claire McCaskill, D-Mo., a member of the Senate Armed Services Committee, said Franklin’s decision was “ignorance at best and malfeasance at worst.”

To cement the ban on commanders’ ability to overturn convictions, the Senate’s FY 2014 defense bill contains a clause that would establish the ban as law.

However, congressional inaction and an end-of-the-year time crunch may mean the Gillibrand and McCaskill amendments — as well as the entire defense bill itself — don’t receive final votes before Congress recesses for Christmas.

Wilkerson was allowed to retire as a major, but later said the retirement was forced. In one of his few public statements about the case, he told the Air Force Times that he was unfairly treated and that his name was “dragged through the mud.”

“I emphatically disagree with [the] decision and believe my service record provides clear proof that I honorably served in the rank of lieutenant colonel, so much that I was promoted to colonel,” Wilkerson said in a statement to AFT.

In March, Franklin said at a staff sergeant’s court-martial hearing in England that he had no regrets about his decision regarding Wilkerson.

“I’ll tell you I am sleeping like a baby at night time,” Franklin said. “I made the right decision even amidst all the attacks … I can sleep well at night because I know I made the right call.”