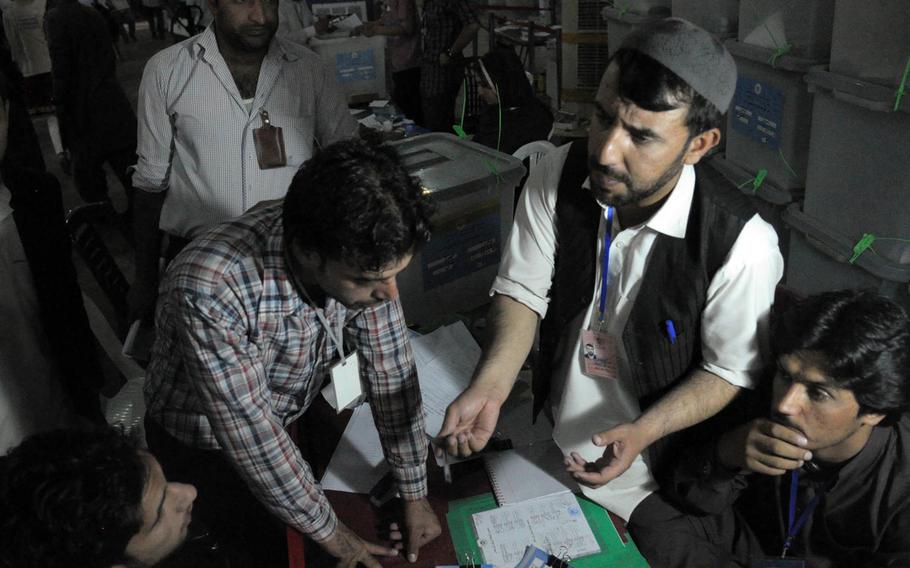 Election observers in Kabul on Sunday, Aug. 10, 2014, look over ballots from Afghanistan's June 14 presidential runoff as part of a massive audit being conducted by Afghanistan's Independent Election Commission and overseen by the United Nations. The review, which began July 17, has been slowed by disagreement between the candidates and insufficient numbers of observers, putting it off pace to finish by the Aug. 31 deadline cited by both candidates. (Steven Beardsley/Stars and Stripes)

KABUL, Afghanistan — Afghan officials began the final stage of a drawn-out review of the presidential runoff vote on Monday as pressure mounted for a resolution to a dispute that threatens the country’s stability and the future presence of U.S. forces.

Members of the Independent Election Commission will now meet daily to look over the results of the past month’s audit to determine which of the votes cast in the June 14 runoff are valid and which are invalid due to possible fraud. The process is expected to change final vote totals for rival presidential candidates Ashraf Ghani and Abdullah Abdullah.

Auditors finished reviewing the bulk of the nearly 23,000 ballot boxes on Sunday, opening the door for Monday’s session. The remaining boxes — fewer than 6,000 in total — are being put through full recounts in an effort to single out suspect polling places, with their results to be adjudicated by the commissioners.

On Saturday, President Hamid Karzai declared that a new president must be sworn in on Sept. 2, two days before a crucial NATO summit. Whether Karzai has the authority to set a deadline is unclear, though Western leaders also have pushed for a candidate to be selected before the NATO summit next week, when leaders will make decisions regarding the future presence of international forces in the country. The date for the inauguration has been repeatedly set back amid allegations of election fraud that finally led to the audit and review currently underway.

Ghani led with more than a million votes after the June 14 runoff, a contest that Abdullah claims he lost because of widespread fraud. Abdullah had led all candidates after the general election in April.

The review process has struggled to balance fairness with speed and been dogged by disagreements between candidates’ representatives, leading to repeated suspensions and slow progress.

The adjudication process that began Monday will likely generate new disputes. Candidate representatives will observe each session and be allowed to protest commissioners’ decisions within 24 hours of publication of each day’s results. The IEC will then have 48 hours to rule on the complaints.

The resulting three-day lag, plus the time needed to recount and then adjudicate the ballot boxes from the suspect polling places means the pace of the overall review effort will likely remain slow, said Martine van Bijlert, who has followed the process closely for the Afghanistan Analysts Network.

“Even if they manage to speed up the special audit like crazy, and they finish it in five days — which would mean a major, different way of working — then they would still have three days after that,” she said. “And that’s the ideal scenario — no disputes, no walkouts.”

The international community continues to urge both sides to resolve the dispute peacefully. In two recent visits to Kabul, Secretary of State John Kerry elicited signed agreements from both candidates to accept the audit results and create a joint government with a role for the losing candidate.

Yet Abdullah supporters have continued to question the legitimacy of the process.

Efforts to agree on a unity government remain stuck on different interpretations of the new positions of opposition leader and chief executive. Although the two candidates have begun meeting to try to reach a resolution, they may not have reason to compromise until the audit picture becomes clearer, van Bijlert said.

“What I think complicates everything is both candidates trying to gauge how strong their position is,” she said.

President Barack Obama called each candidate on Friday to encourage them to work toward a joint structure and accept the outcome of the vote review.

Afghanistan’s economy and the future of NATO and U.S. forces are among the stakes of the election impasse. Both candidates have said they will sign agreements for a residual training and advising force to remain in Afghanistan after all international combat forces withdraw by the end of December, but NATO’s secretary-general recently warned the time for a deal was running out.

Both candidates have warned that civil unrest could ensue if supporters feel the election review was not fair.